Les Miles Rappels for 'Over the Edge for Adoption' 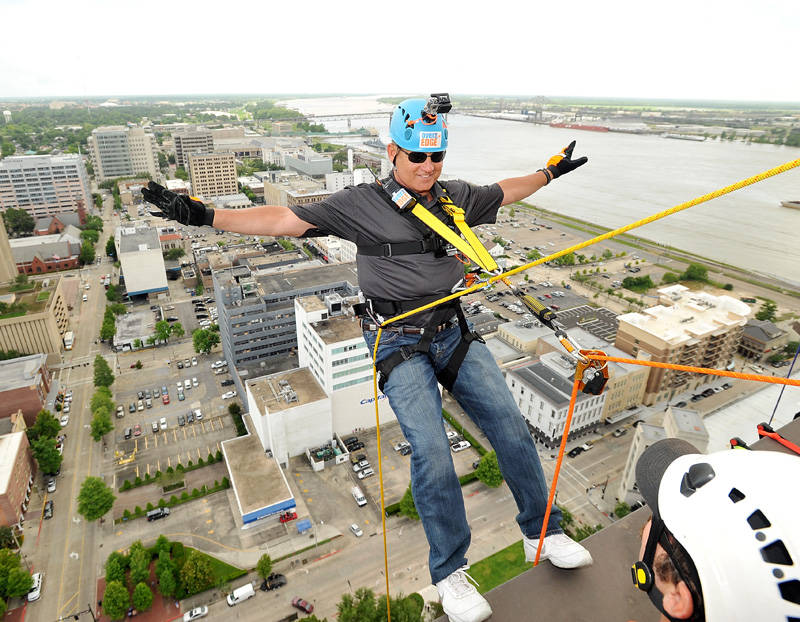 BATON ROUGE — LSU head football coach Les Miles rappelled down the 308-foot tall, 24-story One American Place building in downtown Baton Rouge on Thursday afternoon to raise awareness for the “Over the Edge for Adoption” non-profit foundation, which seeks to place the nearly 500 adoption-eligible children of the Louisiana Foster Care program in homes.

Miles was joined by Miss Louisiana 2012 Lauren Vizza and Louisiana State Police Colonel Mike Edmonson. Miles, who was harnessed in and wore a helmet, practiced on the side of the building before making the descent. A crowd below the plaza featuring LSU fans and the many business people of the downtown area gathered to watch him.

“It was well worth it,” said Miles. “The opportunity to raise awareness for adoption of children in the area is very important. It was a privilege to be a part of the event. I encourage families to take that step and bring a child into their home.”

Louisiana Family Forum, the organizer of the event, hopes to provide a unique moment for increasing awareness. The once-in-a-lifetime experience will feature several key state leaders rappelling down on Friday as well. The event is phase two of a three-phase initiative where LFF seeks to reduce red tape in foster care adoptions, raise awareness and connect 100 children to permanent families.

Miles donned two GoPro cameras – one on his helmet and one on his chest – while the LSU football video staff filmed from different areas around the building. The video of Miles making the plunge for adoption will be available on www.LSUsports.net.

Before making the descent down Baton Rouge’s second-tallest building, Miles gazed over the city and toward Tiger Stadium. With a harness for support, he made his way down the glass encased structure with several office workers taking photos to Twitter as they saw the coach head down. As he arrived at the bottom, fans cheered and took photos.

“The view from the top of the building was special,” said Miles. “As I went down, people would take photos from their offices and wave. It was a fun time and I felt comfortable going off the ledge. It was just a great cause to be a part of.”