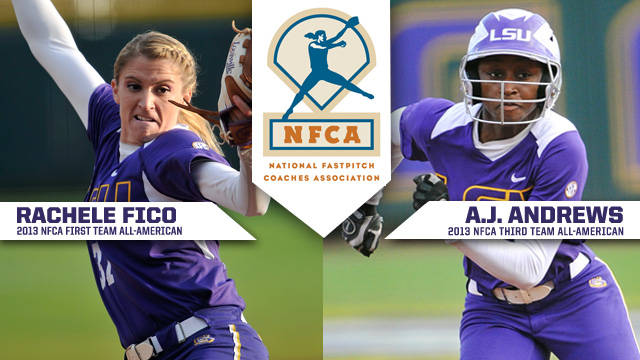 The last time that LSU had two players garner NFCA All-American status during the same season was in 2007 when Leslie Klein and Killian Roessner accomplished the feat.

“We are so proud of and are so excited for A.J. and Rachele to be chosen for such a prestigious award,” head coach Beth Torina said. “I know there are so many talented players in the country that deserve to be recognized so to have two players from LSU is a huge honor. This is a great honor for not just our players and staff, but for the entire LSU community.”

Andrews came away with a team-leading .359 batting average on 71 hits. The 71 hits are eighth, while her team-high 47 runs scored are 15th on the SEC leaderboard. She hit safely in 45 of 58 games which included 17 of her 23 SEC outings and was apart of 28 percent of LSU’s runs scored for the season.

Andrews produced a team-best 19 multi-hit efforts and drove home 32 RBIs, third-most on team. She collected six game-winning/game-tying RBIs in fifth inning or later in SEC play, five were against Top 25 teams. The Florida native went 19-for-21 in stolen bases, tied for 12th in the SEC.

“A.J. is a spectacular outfielder that shines both offensively and defensively,” Torina said. “She is extremely driven and has truly earned this award by all of her hard work, effort and determination. I am excited for her to be recognized, but I am also excited to see everything that A.J. can accomplish in the rest of her LSU career.”

Fico, a USA Softball Top 25 Player of the Year and Senior Class Award Top 10 finalist, notched a 24-13 mark. She picked up 14 of her 24 victories over RPI Top 35 opponents and twirled 10 shutouts to rank tied for 10th nationally. The right-hander racked up 232 strikeouts, second-most in the SEC.

During conference play, Fico was one of two pitchers to rank among SEC’s Top 4 in wins (11), ERA (2.27), Ks (94) & opponent average (.198) in league games. She tied the SEC’s single-game record held by Monica Abbott with 22 strikeouts at Mississippi State and garnered the NFCA’s National Player of the Week award on April 30 after two wins during LSU’s sweep of Alabama.

“Rachele has left her mark on our program in so many ways,” Torina said. “It is a great honor for her to be recognized for what she has done athletically throughout her final year at LSU. There’s no doubt that she is one of the nation’s best. While she is honored for being such a great student-athlete, she also will be remembered by our team as someone we are proud to call an LSU Tiger. She has represented our program with tremendous character, heart and tireless effort.”

LSU finished its second season under head Beth Torina with the program’s 15th 40-win season since softball was reinstated in 1997. The Tigers are slated to return 16 letterwinners sparked by Andrews along with Bianka Bell and Jacee Blades, a pair of 2013 All-SEC Second-Team picks.

Below is a complete listing of the 2013 Louisville Slugger/NFCA Division I All-Americans.