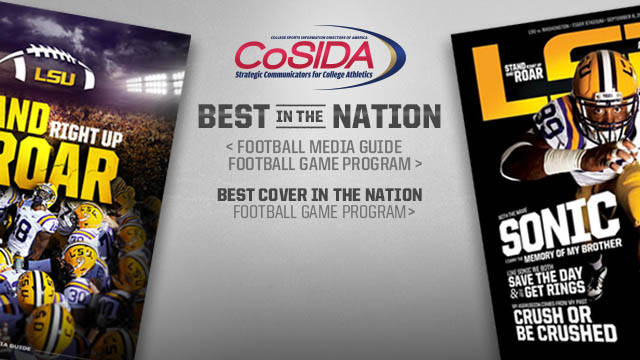 It marks the first time that LSU swept all three in the football category. It also represents the 26th “Best of” CoSIDA award for the LSU Sports Information office.

Photography for the book was under the direction of Steve Franz and student photographers Chris Parent, Hilary Scheinuk and Martin McCallister. Editorial assistance was also provided by senior associate SIDs Bill Franques and Kent Lowe and associate SIDs Will Stafford and Matt Dunaway.

The 208-page LSU Football Media Guide features a comprehensive look at the program, including player and coach profiles, statistical records and history and a recap of the Tigers’ record-setting 2011 season. The 52-page “Only One LSU” section illustrates the traditions, facilities and experiences that make LSU football and the university unique.

The award-winning “LSU at the Game” Program was edited by Franques with assistance from Bonnette, Martin, Terry and Vice Chancellor Herb Vincent. Feirman coordinated the design work of the program and it was produced by LSU Sports Properties. The programs are printed by Garrity Print Solutions in Harahan, La.

It represents the first time since 2007 that the game program cover was voted “Best in the Nation.” Seven of the eight covers of the 2012 season featured photo shoots of seniors. Defensive end Sam Montgomery was the cover for the Washington game, and on that cover were Montgomery’s most motivational quotes in a unique design. The Alabama game program paid tribute to College Football Hall of Famer Charles Alexander.