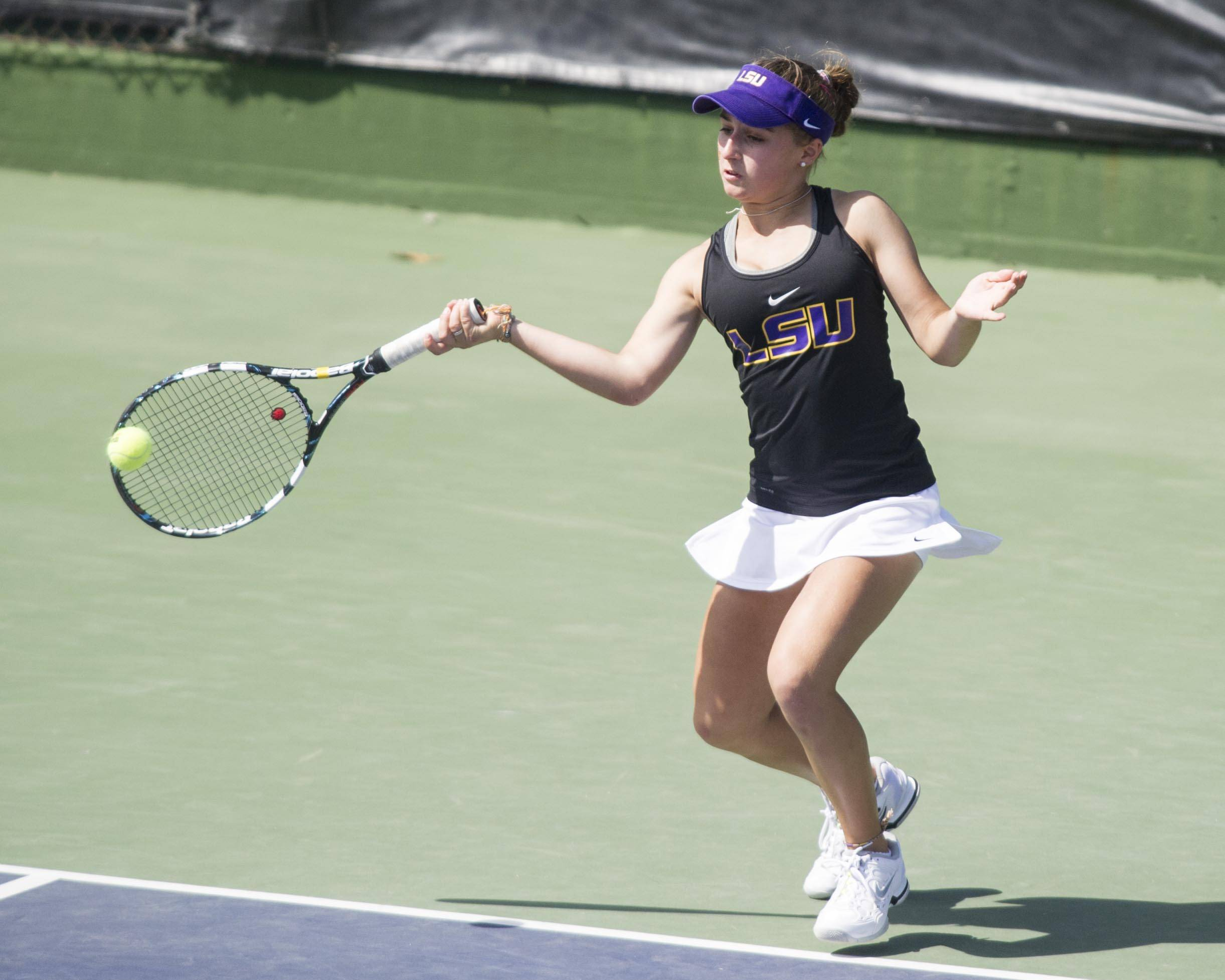 BATON ROUGE – The voters in the Louisiana Sports Writers Association selection of the 2013 All-Louisiana college tennis teams spread their votes around when trying to select the men’s and women’s players of the year.

The end results were ties for the POY spot on both teams.

On the men’s side, last year’s Louisiana POY, Loic Didavi of Xavier, repeated the honor in 2013 and shares the honor with Chris Simpson of LSU. The women’s players sharing the honor were Southland Conference POY Klaudia Gawlik of McNeese State and Conference USA First Team performer, Klara Vyskocilova of Tulane.

Another Xavier player, Kyle Montrel, was named the men’s Freshman of the Week, while Gawlik earned double honors by picking up the women’s FOY honor. Rui Silva of UNO, a transfer from Virginia Commonwealth, was named men’s Newcomer of the Year for first-year non-freshman players in Louisiana, while Michigan State transfer Valya Rusakova from Southeastern Louisiana was the women’s newcomer.

Didavi of Xavier was ranked No. 4 in the nation in ITA NAIA singles and was the NAIA National and Regional Senior Player of the Year. The native of Cotonou, Benin, had three singles victories and five doubles victories against NCAA Division I schools. He posted a record of 15-6 at No. 1 singles.

Simpson, a sophomore from Derby, England, won 12 matches this past year including 9 versus ranked opponents. He was named to the field for the NCAA singles championship and helped LSU to a second round match in the NCAA Championship while earning All-SEC second team honors. Simpson was ranked as had as No. 42 in singles and No. 33 in doubles.

Gawlik, from Nowy Sacz, Poland, earned SLC Player and Freshman of the Year honors to go with his Louisiana honors while winning the SLC’s No. 1 singles title. Gawlik was 21-0 overall in singles, including 8-0 in the league. She recorded the second best record in school history and is the second player in league history to win both POY and FOY in the same year.

Vyskocilova, a junior from Klatovy in the Czech Republic, posted a 19-8 singles record and was ranked 58th in the country during the year. The C-USA First Team selection had a win over the nation’s No. 31 player and posted nine dual match wins in straight sets.

Montrel, the men’s FOY, was GCAC Player of the Week four times with a 16-4 record in both singles and doubles while ranking No. 34 in singles and 15 in doubles. He posted four singles victories and five doubles wins over NCAA D1 teams and scored in 20-of-21 dual matches.

Silva, the men’s newcomer, won 15 matches in earning SLC NOY honors while winning the SLC No. 2 doubles title. He was the first UNO player to be ranked in the top 125 since 2003 and he won four-of-six three-set matches. Rusakova, the women’s SLC NOY was the league’s individual champ at No. 4 singles with a 16-5 record. The junior from Moscow, Russia, won her last eight singles matches of the spring.

Coach Brown guided the Tigers to their eighth NCAA appearance during his tenure in a season when the Tigers were able to pull off some big league upsets including wins over No. 6 Tennessee, No. 7 Ole Miss and No. 11 Texas A&M.

Green was the NAIA National and Regional Coach for Xavier, the first team in any sport at the school to be ranked No. 1 nationally. The senior-less team topped the final three polls entering the national tournament after ranking 13th in the preseason. The team was 17-7, including 10-0 versus ranked NAIA teams.

With the women’s honorees Gawlik and Vyskocilova on the first team were junior Kourtney Howell of Xavier; junior Polina Konop of Northwestern State; senior Emma Levy of Tulane; freshman Ella Taylor of LSU; and, freshman Renee Villarreal of Southeastern.

The voting for the team was based on nominees submitted by tennis sports information staffers and voting was done by those that nominated. Sports Information personnel could not vote for players from their own schools.