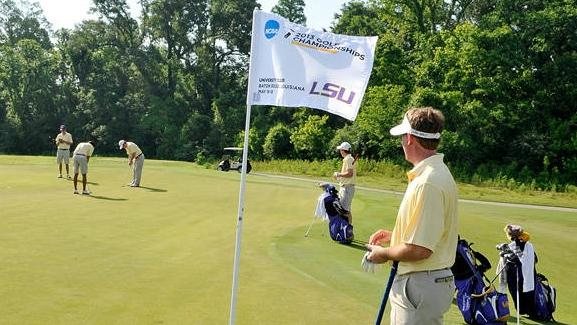 BATON ROUGE – After claiming their best regional finish under head coach Chuck Winstead with third place at the NCAA Baton Rouge Regional, the 17th-ranked LSU Tigers are set to tee off on Tuesday in the opening round of the 2013 NCAA Division I Men’s Golf Championships being held this week at the Crabapple Course at Atlanta’s Capital City Club.

The Tigers are set to make their 34th NCAA Championships appearance in program history and third in four seasons after qualifying in back-to-back seasons in 2010 and 2011.

Georgia Tech will play host to this year’s NCAA Championships as the Crabapple Course at Capital City Club in Atlanta will play to a par 72 and 7,137 yards for the event to be contested over the next six days.

The top five teams from six regional tournaments earned the right to compete at the NCAA Championships this week. The Tigers earned their place in the field after claiming a third-place finish while hosting the NCAA Baton Rouge Regional held May 16-18 at the University Club in Baton Rouge.

The 30 teams in the field this week will compete against one another in three rounds of medal play beginning Tuesday morning. After wrapping up 54 holes of medal play on Thursday, an individual NCAA Champion will be crowned and the top eight teams in the final team standings will be seeded according to finish and earn a spot in the single-elimination match play tournament for the national championship.

The quarterfinals of the eight-team match play tournament will be held on Friday, followed by the semifinal round on Saturday and the national championship match on Sunday.

The Tigers are the No. 17 seed among the 30 teams in the field in this year’s championship and are paired with No. 16-seeded Oklahoma State and No. 18-seeded Auburn in Tuesday’s opening round and Wednesday’s second round of stroke play. They will tee off Tuesday at 6 a.m. CT in the first wave off the first tee and Wednesday at 11:20 a.m. in the fourth wave off the 10th tee.

Pairings for Thursday’s final round of stroke play will be determined after compiling the 36-hole team scores in the field following Wednesday’s action.

The California Golden Bears have earned the No. 1 overall seed at the 2013 NCAA Division I Men’s Golf Championships as the favorites to claim the national championship. Other Top 10 seeds in the tournament include No. 2 and 2012 NCAA runner-up Alabama, No. 3 UCLA, No. 4 and defending national champion Texas, No. 5 Washington, No. 6 New Mexico, No. 7 Georgia Tech, No. 8 Arkansas, No. 9 TCU and No. 10 Florida.

Live scoring of the championship can be found online at www.NCAA.com. LSU fans can also receive additional coverage of the Tigers by liking LSU Men’s Golf on Facebook and following @LSUMensGolf on Twitter.

The Tigers are making their 34th appearance all-time at the NCAA Championships and their third in four seasons after finishing in 24th place in 2010 and 21st place in 2011 following three rounds of stroke play. LSU owns a rich history at the NCAA Championships as the squad has won four national titles while earning 19 top-10 finishes in the event.

Peterson’s victory in LSU’s last NCAA Championships appearance in 2011 snapped a 70-year drought as he became the first Tiger to lift the national championship trophy since Stewart in 1941. Peterson claimed the first spot with a winning 54-hole score of 5-under par 211 at Oklahoma State’s Karsten Creek Golf Club in Stillwater for a dramatic one-stroke victory over UCLA’s Patrick Cantlay.

While the Tigers are making their third NCAA Championships appearance in four seasons, their five underclassmen making the trip to Atlanta will debut in the event when they tee off in Tuesday’s opening round. They are set to compete with a lineup featuring two All-SEC selections in junior Andrew Presley and sophomore Curtis Thompson, as well as junior Smylie Kaufman, sophomore Stewart Jolly and freshman Zach Wright.

Thompson backed up his First-Team All-SEC selection this season by claiming a first career top-10 regional finish at the NCAA Baton Rouge Regional as he guided the Tigers into the NCAA Championships by tying for 10th place at the University Club. While Thompson is the team’s leading scorer this year with a career-low 72.9 scoring average in 12 tournament starts on the campaign, he is pushing for All-America honors for the first time in his collegiate career with his team-leading five top-10 and 10 top-20 finishes on the campaign.

Presley, a Second-Team All-SEC selection for the second-straight season, follows with a 73.4 stroke average in his 12 tournament appearances while earning a team-best three top-five finishes. Presley has matched an effort of five top-10 finishes while leading the Tigers into the NCAA Championships again this season.

Jolly follows his teammates with a 73.8 scoring average in 12 starts, including two top-five and four top-10 finishes on the season, while Wright has posted a scoring average of 74.7 strokes per round in 11 tourney starts in his debut season and Kaufman rounds out the lineup with a 75.3 stroke average in five appearances for the Tigers in 2012-13.