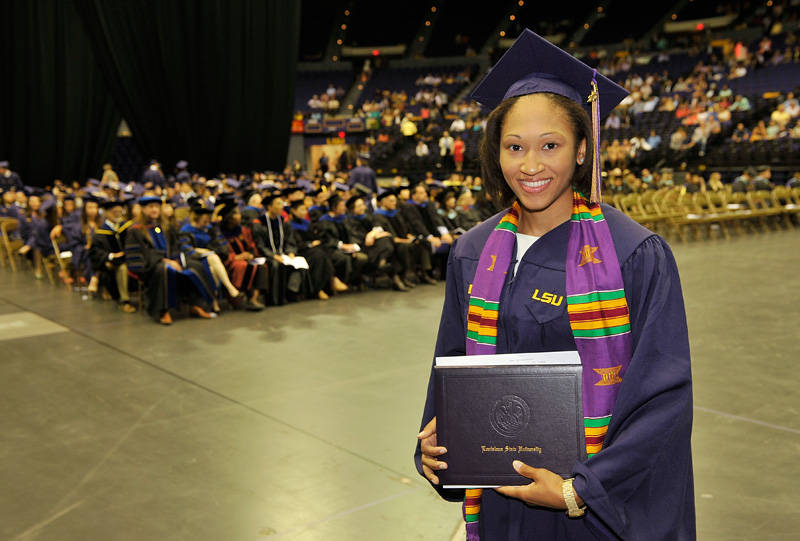 BATON ROUGE – LSU issued 64 diplomas to its student-athletes on Friday as the school held its annual Spring Commencement.

Of the 64 degrees that were handed out, 57 were undergraduate degrees with the remaining seven being for graduate school.

“Congratulations to the class of 2013,” said Kenneth Miles, who serves as Assistant Vice Chancellor and Executive Director of the Cox Communications Academic Center for Student-Athletes.  “We, in the Cox Communications Academic Center for Student-Athletes, are extremely proud of them and their accomplishments. Even though they are now graduates, the impressions they left on us are as heartfelt as the impressions we left on them. We truly wish all of them success in their future endeavors.”

Among the graduates on Friday include seven members of the LSU baseball team, four of which are still on the roster for the Tigers.

The LSU basketball programs were represented at graduation by Adrienne Webb (sports administration) and Bianca Lutley (general studies) on the women’s side and Andrew Del Piero (sociology) on the men’s side. Webb helped lead the Lady Tigers to the Sweet 16 of the NCAA Tournament this year by averaging over 19 points per game, while Lutley averaged a career-best 10.2 points per game.

Del Piero, who gained fame as the former LSU band member turned basketball player, started 22 games for the Tigers in 2012-13 and averaged 4.3 points and 3.1 rebounds a contest.

Lauren Carleton, who is the most decorated distance runner in the history of the LSU women’s track program, received her Master’s degree in business administration after posting a 4.0 grade point average. Carleton, who was a University Medalist in 2011 as the graduate with the top grade point average in her class, was crowned the 2013 SEC Indoor Champion in the 5,000-meter run and she has set three school records as a senior this year.

The following is a complete listing of student-athlete graduates during the 2013 LSU Spring Commencement:

COLLEGE OF HUMAN SCIENCES & EDUCATION
Thursday, May 16, 2013 @ 6 p.m. in the Maravich Assembly Center