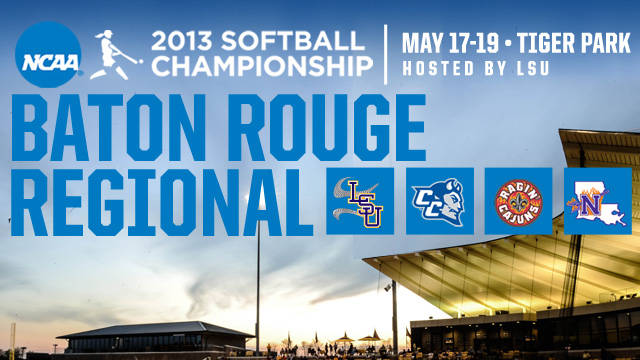 BATON ROUGE – The No. 9 seeded LSU softball team embarks on NCAA Tournament play versus Central Connecticut State, the Northeast Conference champion, as part of a four-team running from Friday to Sunday at Tiger Park.

LSU (40-14) secured an at-large selection into the NCAA Field of 64 and are appearing in its 15th NCAA Tournament appearance. The Tigers have compiled a 44-29 postseason mark highlighted by a trio of trips to the Women’s College World Series during the 2001, 2004 and 2012 season.

Louisiana-Lafayette and Northwestern State open up the double elimination event with a 3 p.m. Friday first pitch. LSU and Central Connecticut State will follow with a 6 p.m. tilt. Every game of the NCAA Baton Rouge Regional will have free live video inside the Geaux Zone at www.LSUsports.net/live.

The Tigers and Blue Devils have never met on the softball diamond. However, LSU coach Beth Torina played under CCSU coach Jeff Franquet on the Yuengling Patriot A’s. The team won the ASA National Championship in the early 2000’s. Franquet also coached LSU volunteer coach Sharonda McDonald on the Philadelphia Force during the late 2000s in the National Pro Fastpitch League.

“Offensively, they are a talented team. I have a lot of respect for their coaching staff,” Torina said. “Pitching wise, Messina has done a good job. We have seen a little bit of her on film, and we have an idea of what to expect. You just never know until you actually see it in person. She has done a good job of keeping them in games and has had a really good year.”

LSU’s offense is sparked by a pair of NFCA All-Region picks in A.J. Andrews and Bianka Bell.

Andrews, an All-SEC First-Team selection, is the only player to start in all 54 games on the season. She has turned in a team-high .359 batting average on 66 hits, the 66 hits are tied for seventh place on the SEC leaderboard. The Florida native also ranks among the SEC’s Top 15 with a team-leading 44 runs scored and 19 stolen bases.

Andrews has tallied a team-high 18 multi-hit performances and drove home 32 RBIs to rank second on the squad. She has driven home six game-winning/game-tying RBIs in fifth inning or later in SEC action.

Bell, the 2013 SEC Co-Freshman of the Year in addition to All-SEC Second-Team and All-SEC Freshman-Team pick, has registered a .356 batting average to go along with a team-best 12 home runs and 47 RBIs. The 12 homers are tied for third-most in program history for a single season and tied for 12th in the SEC whereas the 47 RBIs are the third-highest by a freshman in program history and tied for 10th in the SEC.

Bell has ripped off 16 multi-hit and 12 multi-RBI efforts in addition to being apart of 31 percent of LSU’s runs scored. Nine of her 12 homers and 32 of her 47 RBIs have come since March 17.

Jacee Blades has produced a .354 hitting clip on 58 hits primarily from the No. 2 spot in the lineup. The 58 hits are tied for 14th in the SEC rankings. She has added 15 multi-hit games, third-most on the team.

Kellsi Kloss and Sandra Simmons have teamed with Bell to provide 21 of LSU’s 40 home runs on the season. The freshman trio has batted 3-4-5 in the LSU’s batting order during the last three games and has registered 101 of the team’s 243 RBIs on the season.

Kloss has turned in a .266 batting average and 13 of her 25 hits on the season have produced runs for the Tigers. Her five home runs are tied for third place on the team with Allison Falcon, who returned to action at the SEC Tournament after missing the final two games of the regular season due to injury.

Simmons has garnered a .268 hitting clip and garnered hits in nine of her last 17 games dating back to April 3. She is third on the squad with 30 RBIs.

Simone Heyward has come away with a .341 batting average from the No. 9 spot in the lineup. She recently had a career-long five-game hitting streak end at the SEC Tournament. The California native picked up 12 of her 15 stolen bases versus SEC opponents.

Rachele Fico, a three-time All-SEC Second-Team honoree, has collected a 24-11 mark and twirled 10 shutouts, good enough for an eighth-place tie nationally. Her 24 wins are tied for third in the SEC, while her 222 strikeouts were second-most in the SEC. The senior right-hander was one of two pitchers to rank among SEC’s Top 4 in wins (11), ERA (2.27), Ks (94) & opponent average (.198) in league games.

Ashley Czechner has tallied a 10-1 record in the circle highlighted by victories over No. 4 Alabama and No. 12 Missouri during the regular season. She will look to bounce back from surrendering a career-high 10 runs versus Georgia on May 5.

Meghan Patterson has won six of her eight decisions on the season and compiled a staff-low 1.73 ERA. In her last outing, Patterson tossed 3.2 innings of relief where she allowed two runs on four hits at Georgia on May 3.

The Tigers wrapped up their NCAA Regional preparation with an hour of hitting in the batting cages followed by an hour of defensive work on the field.

“Today’s practice was mostly is just about reps,” Torina said. “We don’t try to accomplish a lot before the day of a game. We put in a lot of good work this past week in practice. Unfortunately, we got back from the SEC Tournament last week early, but it was to our benefit. We got in some really good work. Our players worked hard and got better. I think we are back to our old selves.”

Every game of the NCAA Baton Rouge Regional will have live video inside the Geaux Zone on www.LSUsports.net/live. The LSU games also will be carried live by the LSU Sports Network and Country Legends 104.9 FM in the Baton Rouge area.

All-session and single-season tickets for this weekend’s NCAA Baton Rouge Regional are on-sale at www.LSUtix.net.

Fans can follow every pitch of LSU softball via live in-game updates at the program’s social media outlets @lsusoftball on Twitter and www.Facebook.com/lsusoftball.