Softball Upended by Georgia at SEC's 7-0 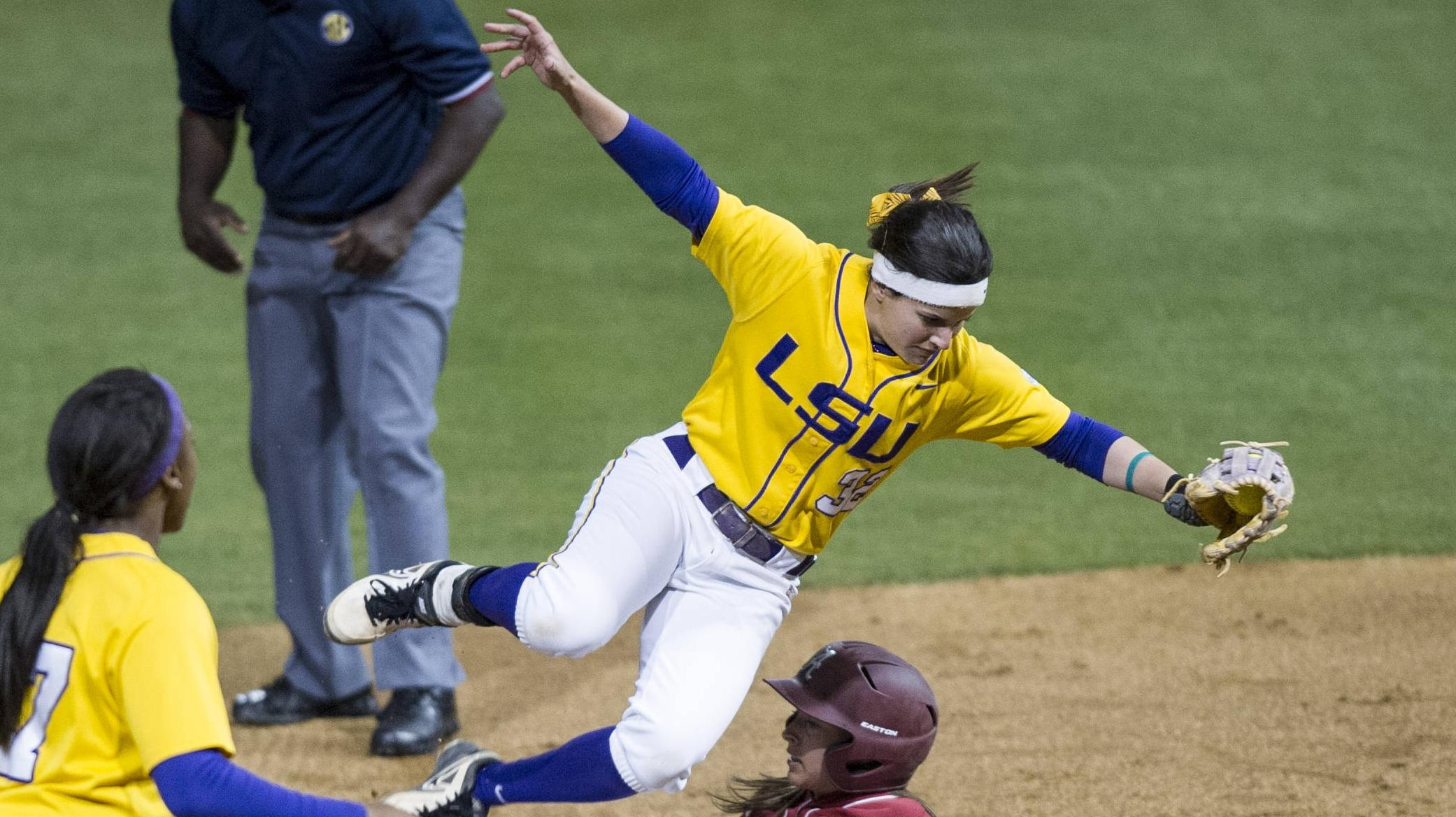 LEXINGTON, Ky. – The No. 10 LSU softball team was handed a 7-0 loss by Georgia during the quarterfinal round of the SEC Tournament Thursday at John Cropp Stadium on the University of Kentucky campus.

LSU (40-14) was shutout for only the second time on the season and dropped its third straight decision to the Bulldogs (38-18) over a six-day stretch. UGA advances to face top-seeded and No. 3 Florida in Friday’s semifinal round.

The Bulldogs received hits from eight of their nine starters fueled by multi-hit efforts from Kaylee Puailoa and Katie Browne. Chelsea Wilkinson was effective and efficient en route to a five-hit shutout in the circle. She recorded three strikeouts against one walk and improved to 8-4 on the season.

Trailing 4-0, LSU’s best opportunity to score came during the sixth inning when A.J. Andrews and Bianka Bell strung together a pair of singles two batters part. However, Sandra Simmons fouled out to right for the frame’s final out.

“Georgia definitely deserves a lot of credit,” head coach Beth Torina said. “Obviously, they have our number. I didn’t think my team played very well today. Of course, I’m not trying to take any credit away from Georgia, but I didn’t think we played our best game. I thought we got a better effort on the mound, but I thought we got a worse effort defensively and offensively. One positive about this is that we have a lot more time to prepare for next weekend and get some extra practice days. We’re at a point where we obviously need it.”

Georgia opened the scoring and took a 1-0 edge in the second inning courtesy of a Katie Browne solo home run to left field. The Bulldogs threatened for more and placed runners on the corners. LSU’s catcher Lauren Houston made a diving catch on a foul ball to keep the score at 1-0.

UGA pushed its lead to 3-0 during the fifth inning. With runners on second and third base, Puailoa smacked a two-run single that defected off the glove of LSU’s second baseman Allison Falcon and squirted into right field.

The Bulldogs took advantage of LSU’s third error of the game and scored an unearned run in the sixth inning. Tina Iosefa and Tess Sito tallied RBIs to spark a three-run UGA seventh to complete the 7-0 win.

LSU’s Rachele Fico was issued the loss and dropped to 24-11 for the season. The senior right-hander surrendered seven runs, six earned, on 10 hits. She registered seven strikeouts versus three walks.

With a RPI rating of No. 5 entering the week, LSU will receive an at-large berth in next week’s NCAA Tournament. The 64-team field with 16 four-team host sites will be announced Sunday at 9 p.m. televised by ESPNU.

“Honestly, we’re in the identical situation as last season,” Torina said. “We were swept in the last series of the year and lost the first game in the conference tournament, the identical scenario. We went back to the drawing board when we got back, and we used the extra practice days to our benefit to refocus our team. I have a team that’s talented enough to go to the College World Series. Without question, we have every aspect of what it takes to be there. We have offense, we have pitching and we have great defense. We’ve shown that throughout the year so that’s our plan.”

Opening statement …
“Georgia definitely deserves a lot of credit. Obviously they have our number. We have not played well against them in the past week, now three times. A lot of credit goes to their team. I didn’t think my team played very well today. Of course I’m not trying to take any credit away from them, but I didn’t think we played our best game. I thought we got a better effort on the mound, but I thought we got a worse effort defensively and offensively than we had in those series, the regular season series. One positive about this is that we have a lot more time to prepare for next weekend, get some extra practice days. We’re at a point where we obviously need it.”

On trying to repeat last year’s World Series run …
“Honestly in the identical situation, we were swept in the last series of the year and lost the first game in the conference tournament, the identical scenario. We went back to the drawing board when we got back. We used the extra practice days to our benefit, refocused our team. I think it would be a very odd scenario to do the exact same thing, but of course that’s what we’re going to hope for and I have a team that’s talented enough to go to the College World Series. Without question we have every aspect of what it takes to be there, we have offense, we have pitching, we have great defense, we’ve shown that throughout the year so that’s our plan.”

On not facing SEC competition next week …
“I sure hope we’re not going to play an offense like that. I think the key is to focus on ourselves and our strengths and get back some fundamental things, just get back to a better spot. It’s nice that we’re done with finals and these guys can just focus on softball and themselves and getting back to a good fundamental spot where we were earlier in the year.”

On what they saw at the plate …
“She (Georgia’s Chelsea Wilkinson) had a really good day today. She mixed it up and didn’t stay on one side of the plate. We could not put the hits together and make it happen. She definitely had a good day and we struggled.”

On Georgia’s offense …
“The offense is so talented one through nine. It has been hard every time. They are always aggressive. Things have just gone their way these past three games. I would like another chance at them. I don’t know if we will get it but I would like it. You can’t take anything away from them and they are great hitters.”

On how the SEC Tournament prepares them for post-season play …
“Every time you play in the SEC you are getting prepared in the post-season. This conference is so talented. Anybody can beat anybody on any given day. Anytime we are matched up with an SEC team you know you have to bring your best game. Everyone we play is so talented, which will help us in the long run.”

On the pitch she threw to Katie Browne …
“I missed. It was a curveball.”

Opening Statement …
“I am just so proud of the team. I thought they played with a lot of heart and passion today. Chelsea (Wilkinson), you just can’t say enough about her performance and the way that she held her composure and got outs for our defense. The defense played great behind her and wow I am so excited for Katie Browne, she got up there and got a hold of a pitch and did a great job with it.”

On the starting pitcher for tomorrow’s game against Florida …
“You can ask, but we haven’t discussed it yet. We just got off the field. It was a great game. I was so proud of Chelsea today.”

On playing Florida in the semifinals tomorrow …
“They are a great team with a great coaching staff and great players. It is going to be a fun matchup. I can’t wait to get out there and compete.”

On the SEC Tournament preparing them for the NCAA Tournament …
“The SEC is an amazing conference with so much support from the athletic administrations. Just looking at Kentucky’s new stadium it is absolutely beautiful. They did an “A” class job with it. The SEC Tournament definitely prepares you for the future. You are going to see great pitching, go against great hitters and have to play your “A” game to be successful.”

On Chelsea Wilkinson’s performance in the circle …
“She did a good job mixing up pitches and letting her defense make plays for her.”

On how she handled Rachele Fico’s pitching during the game …
“Before the game, our coaches just stressed, making adjustments, to us. I just thought about my at bats in the previous games we had against her this weekend and what pitches she threw to me, so I was just ready for that.”

On what they expect when they play Florida …
“I expect another great pitching staff, another great team, and another great hitting team. I expect my team to come out and play like we did today and have good results.”