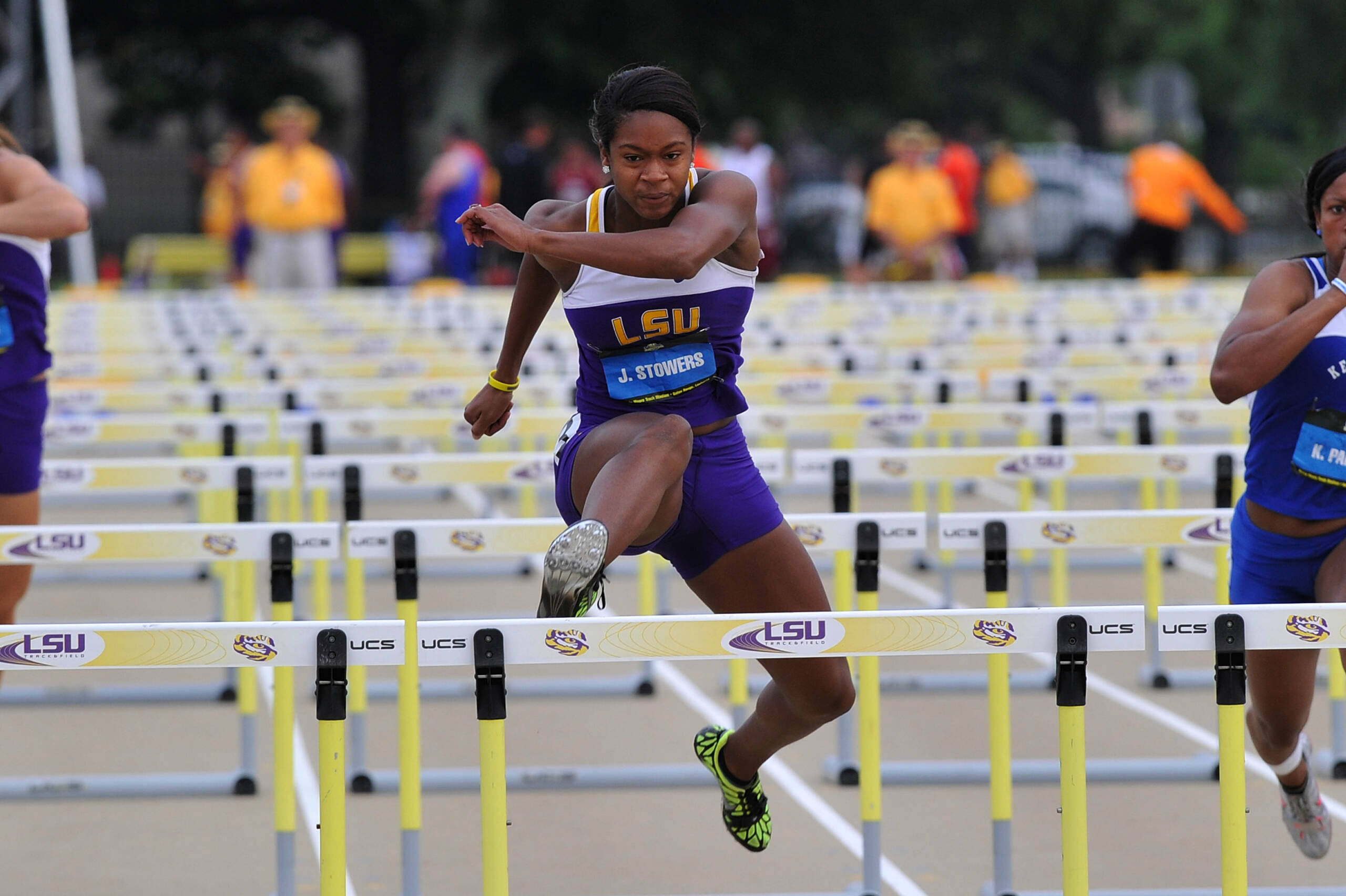 BATON ROUGE – With the regular season in the books and final exams now in the rearview mirror with Wednesday’s departure from Baton Rouge, members of the LSU Track & Field teams will kick off the postseason this weekend at the 2013 SEC Outdoor Track & Field Championships beginning Thursday at Audrey J. Walton Stadium in Columbia, Mo.

The University of Missouri will play host to the SEC Championships in their inaugural season in the league as the four-day meet runs through Sunday at Audrey J. Walton Stadium.

Thursday’s action at the 2013 SEC Outdoor Track & Field Championships features the start of the men’s decathlon and women’s heptathlon at 11:30 a.m. CT and the first open field events of the meet at 2 p.m.

Friday’s field events are slated for a 2 p.m. start followed by the first preliminary races on the track at 6:15 p.m. Final-round action continues Saturday and Sunday at 1 p.m. each day. This year’s SEC Outdoor Champions will be crowned in a special awards ceremony on Sunday at 6:45 p.m. following the running of the 4×400-meter relays.

ESPN3.com will feature a live video stream of the SEC Championships on Saturday afternoon from 3:40-6:45 p.m. CT and Sunday afternoon from 2:50-6:45 p.m. ESPNU will also air a 90-minute tape-delay broadcast from the championship as part of the network’s coverage of the Southeastern Conference on Thursday, May 23, beginning at 7 p.m. CT.

The University of Missouri will provide a link to live results for the 2013 SEC Outdoor Track & Field Championships on its official athletics website at www.mutigers.com/sectrack/results. Fans can also receive updates of the Tigers and Lady Tigers competing this weekend by liking LSU Track & Field on Facebook and following @LSUTrackField on Twitter.

The race for the SEC Outdoor Championship will prove even more difficult this weekend as it marks the debut of the Missouri Tigers and Texas A&M Aggies in the field for the NCAA’s premier conference.

But the No. 4-ranked Lady Tigers have an opportunity to cement their SEC dominance by taking home a sixth women’s team championship in seven seasons at the SEC Outdoor Championships as they look to defend a title they won on their home track at the Bernie Moore Track Stadium in Baton Rouge last spring. The LSU women are the three-time defending SEC Outdoor team champions and the winners of five of the last six titles after claiming the conference crown most recently in 2007, 2008, 2010, 2011 and 2012.

The Lady Tigers scored 161.5 points for a 23.5-point victory over the 138 points scored by the second-place Florida Gators in the final women’s team standings at the SEC Outdoor Championships in the 2012 season.

While the Lady Tigers have been crowned team champions on the women’s side in five of the last six years, the No. 12-ranked Tigers have nearly added to their trophy case with runner-up finishes in four of the last six seasons that includes a second-place performance in the men’s team race on their home turf last year. They also finished runner-up in 2007, 2008 and 2010.

The Tigers tallied 118 points while hosting the SEC Championships a year ago to finish runner-up to the 196 points piled up by the now two-time defending champion Arkansas Razorbacks in the men’s team standings.

As is the case each season, this year’s SEC Outdoor Championships will feature many of the premier program in collegiate track and field as seven men’s teams and five women’s teams are ranked among the country’s Top 25 programs in the latest U.S. Track & Field and Cross Country Coaches Association power rankings.

The 12th-ranked Tigers will battle such championship contenders as No. 1 Florida, No. 2 Texas A&M, No. 5 and defending champion Arkansas, No. 7 Georgia, No. 16 Ole Miss and No. 20 Alabama.

The fourth-ranked Lady Tigers must defend their SEC crown against four other Top 10 programs as they will join No. 2 Texas A&M, No. 3 Florida, No. 6 Arkansas and No. 10 Georgia in the competition this weekend.

LSU has enjoyed tremendous success at the SEC Outdoor Track & Field Championships over the years as the Lady Tigers lead the league with 13 women’s team titles in their history and the Tigers are second all-time of men’s programs with 22 team titles in their history as the most successful combined track and field program in the Southeastern Conference.

Three athletes will have an opportunity to defend their SEC titles won in Baton Rouge during the 2012 season as they look to lead the program into the championship season this weekend.

Senior Kimberlyn Duncan will be making her final SEC Championships appearance in a storied collegiate career as she is already a 10-time SEC event champion in four seasons with the Lady Tigers. That includes a historic sprint double in 2012 when she set an SEC Outdoor Championships meet record and personal best of 10.96 seconds to win the 100 meters and ran the fastest time in meet history under all conditions with a wind-aided 22.12 to win the 200 meters on her home track in Baton Rouge.

Duncan would make history with a successful defense of her 200-meter crown as she would become the first women’s sprinter in the history of the SEC Outdoor Championships to win three-straight titles in the event. She would also become the 10th two-time 100-meter champion by defending her sprint title in this year’s championship.

Lady Tiger junior Jasmin Stowers has been a dominant force in the sprint hurdles at the SEC Championships throughout her collegiate career as she has been crowned the conference champion in all five championships in which she has competed. That includes a three-peat of SEC Indoor titles in the 60-meter hurdles and back-to-back SEC Outdoor titles in the 100-meter hurdles.

By defending her SEC Outdoor crown in the 100 hurdles this weekend, Stowers would join LSU’s Lolo Jones as the only two sprint hurdlers in SEC history to sweep SEC Indoor and SEC Outdoor titles in the same year for three-straight seasons. Jones swept conference championships in consecutive seasons from 2002-04 with the Lady Tigers.

Stowers actually ran her wind-legal PR of 12.88 in her first career SEC Outdoor final in the 100-meter hurdles at Spec Towns Track in Athens, Ga., to highlight her freshman season in 2011.

Also looking to defend her SEC Outdoor crown in Sunday’s finale is Lady Tiger senior Charlene Lipsey, who claimed her first career SEC Outdoor gold medal in the women’s 800 meters as a junior a season ago.

Lipsey has proven herself as the SEC’s premier 800-meter runner over the past two seasons as she swept SEC Indoor and SEC Outdoor titles in 2012 before defending her SEC Indoor crown earlier this season. She looks to become LSU’s first back-to-back SEC Outdoor champion in the event since LaTavia Thomas won consecutive 800-meter titles in 2007 and 2008.

Other Lady Tigers entering this year’s championship as the SEC’s No. 1-ranked performer in their respective event include senior Laura Carleton at 15:44.41 in the 5,000 meters and juniors Natoya Goule at 2:00.76 in the 800 meters, Nikita Tracey at 56.51 in the 400 hurdles and Karen Henning at 201 feet, 0 inches in the hammer throw.

The Tigers will be led by the likes of sophomore Rodney Brown, who owns the SEC’s top mark in the men’s discus throw on the year with a personal best of 206-3 set at the Texas Relays on March 30.

After competing at the SEC Outdoor Track & Field Championships this weekend, the Tigers and Lady Tigers open up the NCAA Championship in two weeks with a trip to Irwin Belk Track on the campus of North Carolina A&T University in Greensboro for the NCAA East Preliminary Rounds being held May 23-25. They will then finish up the collegiate season with the semifinal and final rounds for the 2013 NCAA Division I Outdoor Track & Field Championships on June 5-8 at historic Hayward Field at the University of Oregon in Eugene.