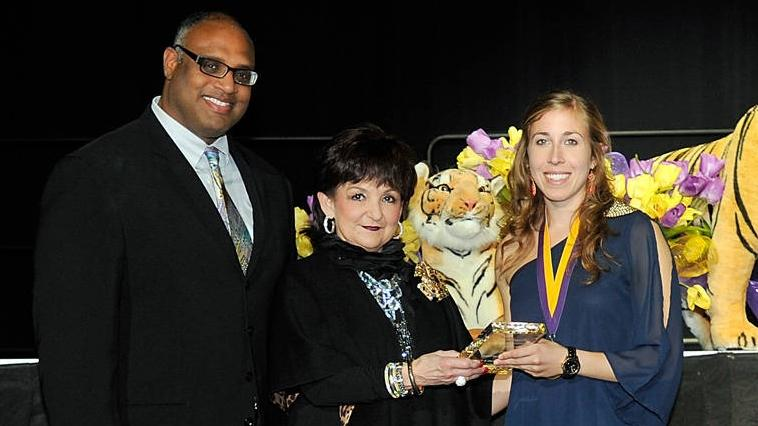 BATON ROUGE – Seniors Joseph Caraway and Laura Carleton are proven leaders of the LSU Track & Field program on and off the track, and they were honored Tuesday with a selection to the SEC Community Service Team for their coordination of the team’s community service efforts during the 2012-13 academic season.

This marks the first time in each of their collegiate careers that Caraway and Carleton have been honored as members of the SEC Community Service Team for track and field and cross country.

A native of Lacassine, La., Caraway has helped LSU’s student-athletes coordinate such community service projects as Read Across Louisiana and Live2Serve.

He joined other student-athletes in going to the Mall of Louisiana for its Read Across Louisiana campaign while reading Dr. Seuss books to children while promoting the broader Read Across America program. Caraway also volunteered on Wednesday nights at the Baranco-Clark YMCA in Baton Rouge for Live2Serve as a mentor to needy children in the community.

Caraway also helped spearhead an anti-bullying campaign with LSU’s Bateman team while joining with The Boys & Girls Club and Baton Rouge Recreation during the past season. He and his classmates joined with other schools across the country in organizing a public relations campaign to fight back against bullying.

Caraway has already been honored by the SEC this season for his efforts on and off the track during his collegiate career as LSU’s male nominee for the SEC H. Boyd McWhorter Scholar-Athlete Award in 2013. He is also a two-time selection to the SEC Academic Honor Roll and former all-academic selection by the U.S. Track & Field and Cross Country Coaches Association during his tenure.

Among Carleton’s community service efforts include assisting Friends of Animals, which exists to rescue and find homes for dogs and puppies that would other be euthanized at the East Baton Rouge municipal shelter.

Caraway and Carleton have also teamed with one another on a number of LSU’s community service initiatives this season, including frequent visits to Our Lady of the Lake Children’s Hospital in Baton Rouge and taking part in the school’s annual Halloween BOOzar and Thanksgiving with the Tigers events.

As part of the Halloween BOOzar, they helped coordinate the team’s game station while playing games and handing out candy to children attending the event. While organizing the annual Thanksgiving with the Tigers event, they helped provide Thanksgiving meals to needy families adopted by LSU’s student-athletes during the fall season.

Each is also a team representative on LSU’s Student-Athlete Advisory Committee as Caraway has served as a special event committee member and Carleton has served as secretary this academic year.

Both Caraway and Carleton are in the midst of their most successful seasons in competition as Caraway is one of the SEC’s premier pole vaulters and Carleton is an All-America contender in the distance events.

Carleton is LSU’s school-record holder in the 5,000-meter run after racing to a lifetime best of 15 minutes, 44.41 seconds in the event at the prestigious Mt. Sac Relays held April 19 in Walnut, Calif. That performance has her ranked No. 1 in the SEC and No. 9 in the NCAA rankings for the 2013 season as one of the nation’s premier distance runners. She is poised to complete the season sweep of SEC titles in the 5,000 meters after taking home the SEC Indoor championship in the event to highlight a historic senior season indoors in 2013.

After missing much of the indoor season with a back injury, Caraway has returned for his most successful season outdoors as an LSU Tiger as he has cleared a lifetime personal best of 17 feet, 5 inches for the pole vault to tie for the No. 8 position in the SEC rankings this spring. He is sure to make a fourth-straight appearance at the NCAA East Preliminary Rounds for his performance in 2013.