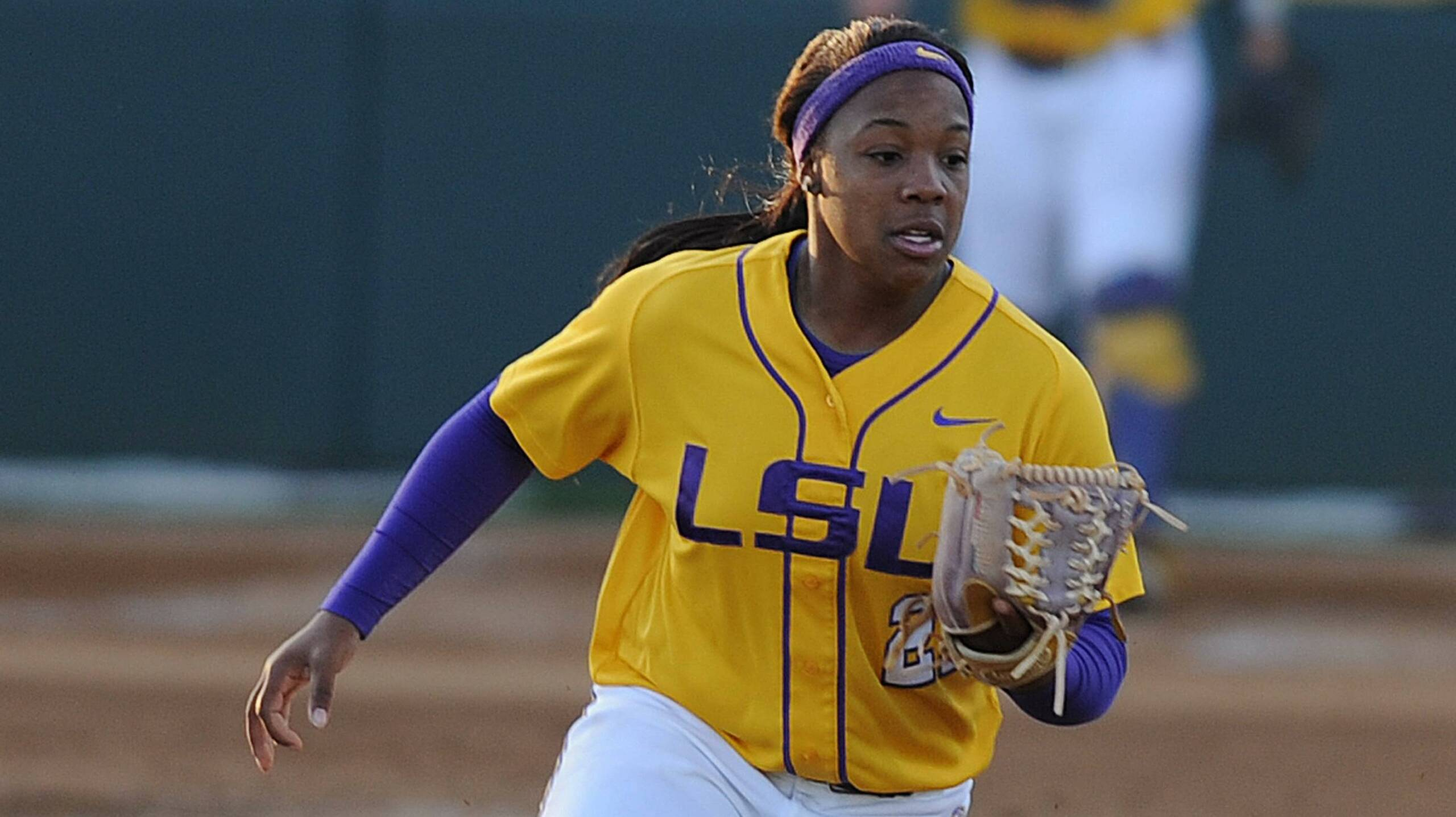 BIRMINGHAM, Ala. – A.J. Andrews, Jacee Blades, Bianka Bell, Rachele Fico and Kellsi Kloss represented the No. 10 LSU softball team on the All-SEC squads as announced Tuesday by the league office.

Andrews is the seventh outfielder in program history to garner All-SEC First-Team honors and first since former All-American Kirsten Shortridge accomplished the feat during both the 2009 and 2010 seasons.

Blades, Bell and Fico each took home All-SEC Second-Team selections. For Fico, it was her third time named to the All-SEC Second Team. Bell added to her memorable freshman campaign and became the second player in program history to earn a share of SEC Co-Freshman of the Year. The Florida native joins Fico who picked up SEC Co-Freshman of the Year in 2010. Bell also secured All-SEC Freshman accolades with Kloss.

Andrews recorded hits in 17 of her 23 SEC appearances and her 26 hits in conference action was tied for ninth place on the SEC leaderboard. She recorded 15 RBIs, third-most on the squad. Andrews’ also came away with six game-winning or game-tying RBIs during the fifth inning or later in SEC play, five of the six games were versus Top 25 teams. During SEC action, she was involved in 39 percent of LSU’s runs.

“It’s nice that the rest of the SEC coaches respect and see how valuable A.J. is to our team as much as we do,” head coach Beth Torina said. “She really jumpstarts our offense and has been a huge spark plug for us at the top of the lineup. She also makes spectacular defensive plays in the outfield. On top of it, A.J. is a hard worker and always is trying to make herself a better player. She has huge expectations and goals for herself.”

Blades hit safely in 17 of her 22 SEC which included hits in multiple games during seven of LSU’s eight SEC series. Her 25 hits were tied for 12th place, while her .329 batting average checked in at 15th place on the SEC leaderboard. The Baton Rouge native picked up a pair of game-winning RBIs during the fifth inning or later in SEC action highlighted by a RBI single to complete the Alabama sweep.

“Jacee is so much fun and a pleasure to be around on a daily basis,” Torina said. “I don’t know where we would be without her and A.J. at the top of the lineup. It’s really nice for Jacee to be recognized after she’s worked so hard all season long to earn her spot in the lineup after not being an opening day starter. I’m proud to watch her every day, and she makes some great defensive plays out there as well.”

“Bianka is extremely deserving of being the SEC’s Co-Freshman of the Year,” Torina said. “She will go down in the history of LSU as one of the most special hitters that we’ve had. She’s been a cornerstone of our offense all season. I’m so proud of her, and I’m so thankful the SEC coaches gave her this honor.”

Fico, a USA Softball Top 25 Player of the Year and Senior Class Award Top 10 finalist, was one of two pitchers to rank among the SEC’s Top 4 in wins (11), ERA (2.27), strikeouts (94) and opponent batting average (.198). The senior right-hander gave up two earned runs or less in 12 of her 18 SEC outings and matched a SEC single-game record previously held by Monica Abbott with 22 Ks at Mississippi State on March 8. Fico is one of six players to earn two complete game victories over Alabama during a single season since 2008.

“Rachele is not only a special pitcher but a great teammate,” Torina said. “We support her so much and are so proud to have her recognized. I know for her, the season starts right now with postseason play, this is how she plays. She did a great job for us all season going against the SEC’s best of the best.”

Kloss has hit safely in 10 of her 17 SEC appearances where she has received multiple at-bats and is coming off a career-high three hits versus Georgia on May 5. She garnered a .255 batting average, a home run and eight RBIs in SEC action. Her lone dinger was a two-run shot off of All-American Jackie Traina during the Alabama series opener.

“Kellsi is another player that’s really earned her way into lineup and has now found herself in the middle of our lineup because she’s done so well,” Torina said. “She’s a pleasure to coach and her hard work has enabled her to earn a spot on the SEC All-Freshman Team.”

LSU meets Georgia Thursday in the quarterfinal round of the SEC Tournament. First pitch is slated for 12:30 p.m. CT from John Cropp Stadium on the University of Kentucky campus. The game will be televised by ESPNU and www.WatchESPN.com with Pam Ward, Michele Smith and Holly Rowe serving as the announcing team.

Fans can follow every pitch of LSU softball this season via live in-game updates on LSU softball’s social media outlets at www.Facebook.com/lsusoftball and @lsusoftball on Twitter.