Men's Golf to Host NCAA Regional as No. 3 Seed 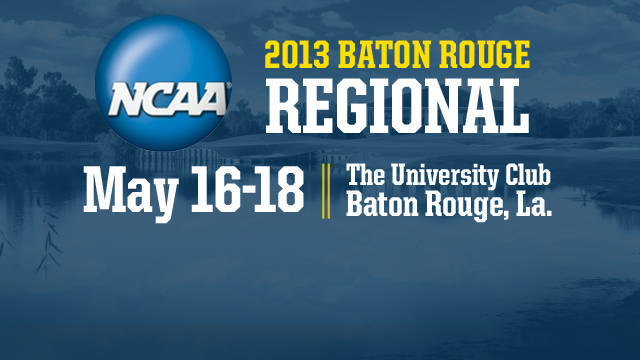 BATON ROUGE – The 17th-ranked LSU men’s golf team learned Monday night that it will compete as a No. 3 seed in NCAA Regional play next weekend as the Tigers will play host to 12 teams from across the country as part of the Baton Rouge Regional being held on May 16-18 at the University Club in Baton Rouge.

This marks the sixth-straight season in which the Tigers have been selected for NCAA Regional play and is the first time they will play host to an NCAA postseason championship on their home course.

The teams in the 13-team field at the Baton Rouge Regional will be competing for one of five qualifying spots into the 2013 NCAA Division I Men’s Golf Championships that will be held May 27-June 2 at Capital City Club in Atlanta.

LSU seeks its third trip to the NCAA Men’s Golf Championships in four seasons after advancing with finishes of fifth place at the 2010 NCAA Central Regional and fourth place in the 2011 NCAA Virginia Tech Regional.

“It is great for our program to have the opportunity to host an NCAA Regional for the first time,” said LSU head coach Chuck Winstead. “We look forward to a great event next weekend. We’re excited to welcome such a strong field to Baton Rouge in what should be a battle for the regional title and for those five spots advancing to the NCAA Championships.”

While the Tigers will play host to the Baton Rouge Regional as the No. 3 seed, they will be joined by a strong field that includes such NCAA hopefuls as No. 1 seed Alabama, No. 2 seed Florida, No. 4 seed Mississippi State and No. 5 seed Houston. Other seeded teams in the field looking to earn an NCAA Championships berth include No. 6 Northwestern, No. 7 Tennessee, No. 8 South Alabama, No. 9 Coastal Carolina, No. 10 UAB, No. 11 Wichita State, No. 12 Southeastern Louisiana and No. 13 Houston Baptist.

The NCAA will use six regional championships to determine its 30-team field that will tee off at the NCAA Championships later this month. A total of 81 men’s teams have earned selection to NCAA Regional play in 2013 with as many as 14 teams competing at each regional site.

The top five teams at each regional site will earn the right to tee it up at the 2013 NCAA Division I Men’s Golf Championships being held at the Capital City Club in Atlanta from May 27-June 2.

The Tigers have claimed an NCAA Regional selection again this year on the strength of a tremendous 2012-13 campaign in which they have won at least two tournament titles for the fifth-straight season as the reigning champions of the Shoal Creek Intercollegiate (Sept. 24-25) and David Toms Intercollegiate (Oct. 6-7) held in the fall.

LSU is also the consensus No. 17-ranked team in the country for the 2012-13 season according to the Golfstat Top 25, Golfweek Top 25 and Golf World/Nike Golf Coaches’ Top 25 polls released last week.