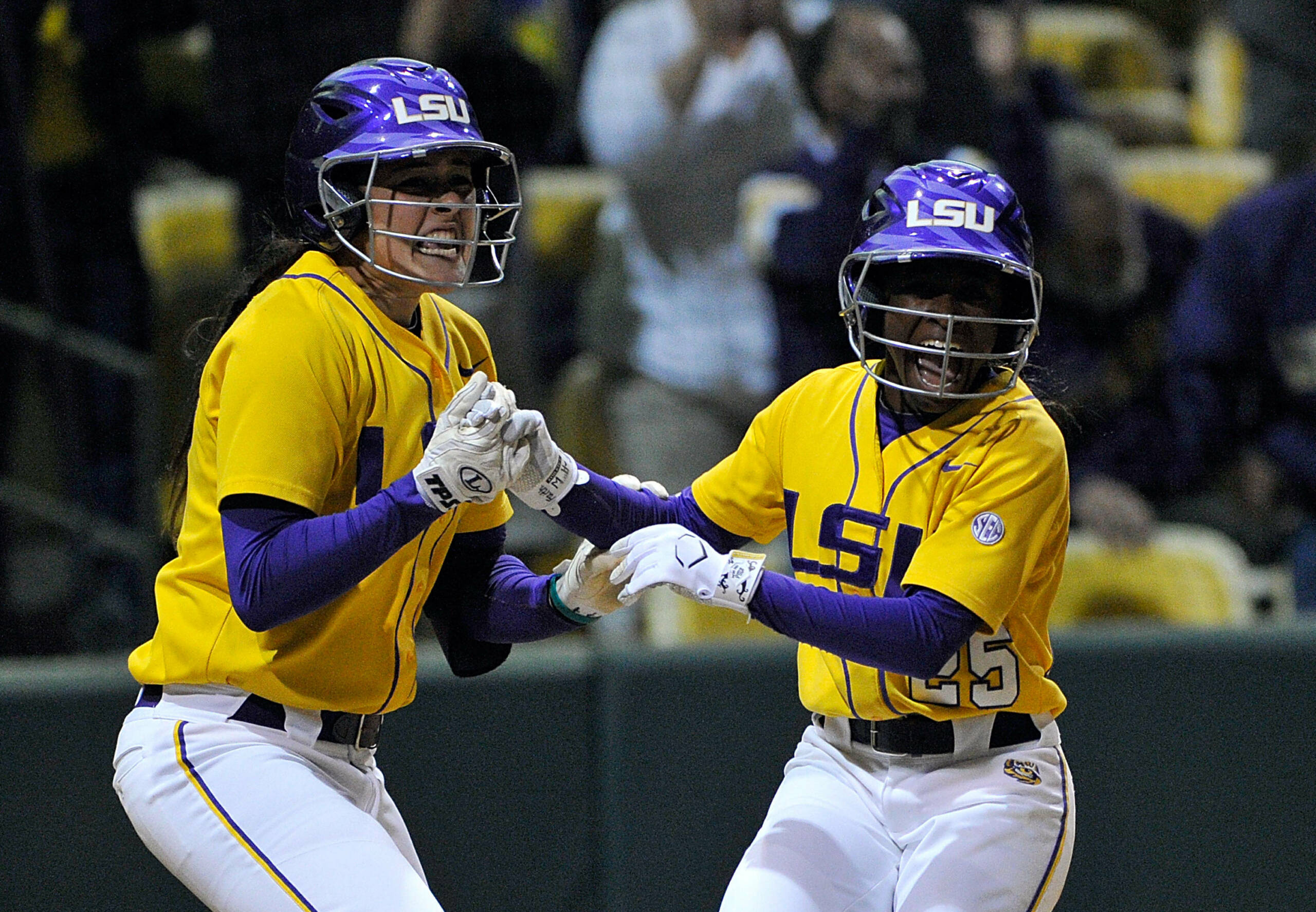 BATON ROUGE – For her achievements on and off the field, LSU softball’s Simone Heyward has picked up the Jesse Owens Athletic Award presented by the LSU Black Faculty and Staff Caucus in addition to the Love Purple Live Gold Unsung Hero Award awarded by LSU campus life.

Heyward was presented the Jesse Owens Athletic Award by the LSU Black Faculty and Staff Caucus last Sunday after LSU’s three-game sweep over Alabama. The LSU Black Scholars program recognizes African American students at LSU who have achieved a grade point average of 3.0 and above. The Jesse Owens Athletic Award, named for track athlete and trailblazer Jesse Owens, is given to a junior or senior student-athlete with the highest grade point average with the most earned hours at LSU.

LSU Campus Life will be naming Heyward its recipient of the Love Purple Live Gold Unsung Hero Award on Friday. The Unsung Hero Award is presented to a student who has made significant differences in their respective organizations, without holding executive positions. The student selected for this award is a role model who has made a positive impact on the entire organization by participating in events and demonstrating a commitment to develop rapport with others to utilize relationship-building skills to encourage them to become involved.

Heyward is an example of a student making significant differences in the LSU softball team and the LSU community. In February, Heyward was presented with the Eye of the Tiger at the 2013 Tiger Athletic Foundation Academic Excellence Gala. This award is presented to a current or former LSU student-athlete who has overcome great adversity to accomplish their academic and/or athletic goals with perseverance, dedication and determination. A year before her arrival at LSU, Heyward lost her mother to cancer. Since that day, Heyward has not sat around and felt sorry for herself; she has set out to make a difference.

Heyward has broadened her outreach beyond the scope of the softball team and even beyond LSU. She has started a program called Y.A.N.A. or “You are not alone.” In this program, she and other LSU student-athletes who have suffered a great loss in their life go and visit young kids who are dealing with similar situations.

In addition, Heyward is a key part of the LSU softball program. She has been a starting outfielder all three seasons and was named to the SEC All-Freshman Team in 2011. The California native was an integral part of the team’s run to the 2012 Women’s College World Series and provided a three-run double versus No. 9 national seed Missouri in the deciding game of the NCAA Columbia Super Regional.

During the 2012 season, Heyward suffered an injury very early in the season. She broke her hand which left her out of competition for a large part of the season. Heyward could have given up at this point but once again she preserved. She hit every day with only one hand and did all the defensive drills she could do.

Heyward’s postseason success as a 2012 NCAA College Station Regional and 2012 NCAA Columbia Super Regional All-Tournament pick was due to her fight, her ability to not quit and to preserver through anything that was in her way.

Heyward’s story is a shining example of perseverance of someone who has turned a difficult situation into something that could benefit the entire LSU community.

“It’s a complete honor to win these awards,” Heyward said. “I’m extremely blessed and so thankful. It’s awesome to be noticed for something other than my athleticism. Many student-athletes are stereotyped as only focusing on their sport and not trying in the classroom or the community. I’m a proof that the two are combined. I’m truly at a loss of words trying to describe how I feel. It’s just great that I can make my family proud once again.”

LSU wraps up its regular season schedule with a trip to Georgia for a three-game weekend series. Games times are slated for Friday at 5 p.m. CT, Saturday at 12 p.m. CT and Sunday at 2 p.m. CT.

Saturday’s contest will be carried by Cox Sports Television/Comcast Sports Southeast with Melissa Lee and Barbara Jordan on the call. Sunday’s finale will be televised to a national audience by ESPN with Pam Ward and Michele Smith serving as the broadcast team. The game also will be available on www.WatchESPN.com and the Watch ESPN app.