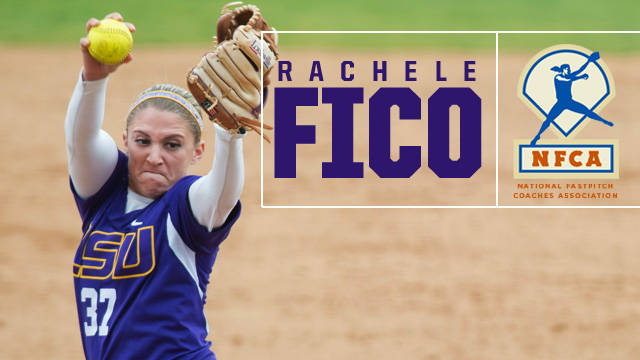 LOUISVILLE, Ky. – After a pair of high-profile victories over defending national champion and then No. 4 Alabama, LSU senior pitcher Rachele Fico was tabbed Louisville Slugger/NFCA National Player of the Week as announced Tuesday by the National Fastpitch Coaches Association.

“This is certainly a fabulous and well-deserved national honor for Rachele and our program,” head coach Beth Torina said. “She’s a special player and deserves every award she receives. Our games with Alabama are always a battle to the end. Being able to clinch a share of the SEC Western Division title and sweep on our senior weekend has provided Rachele memories for a lifetime not only for herself, but her teammates as well.”

Fico became the fifth pitcher since 2008 to notch a pair of complete-game wins in a single series versus Alabama. The other four are fellow LSU All-American Brittany Mack in addition to Arizona State’s Katie Burkhart, Missouri’s Chelsea Thomas and Michigan’s Jordan Taylor.

Fico set the tone early and retired 18 of the first 21 Crimson Tide batters she faced in the series opener. She left the bases loaded in both the seventh and eighth innings which allowed Sandra Simmons to belt a walkoff RBI single with two outs.

In her Senior Day start, Fico grinded out another complete game effort and retired the final four batters she faced sparked by two strikeouts to lock up a share of LSU’s first SEC Western Division title since 2007. Two of the four Alabama hitters she retired were Kayla Braud and Haylie McCleney, a pair of USA Softball Top 25 Player of the Year award finalists, to secure the 4-3 triumph.

“I’m extremely happy, humbled and honored to win a national award like this,” Fico said. “I couldn’t have done it without the support of my teammates, and the atmosphere provided by the Tiger fans. The Alabama series was so special and is something I’ll never forget for those reasons.”

LSU wraps up its regular season schedule with a trip to Georgia for a three-game weekend series. Games times are slated for Friday at 5 p.m. CT, Saturday at 12 p.m. CT and Sunday at 2 p.m. CT.

Saturday’s contest will be carried by Cox Sports Television/Comcast Sports Southeast with Melissa Lee and Barbara Jordan on the call. Sunday’s finale will be televised to a national audience by ESPN with Pam Ward and Michele Smith serving as the broadcast team. The game also will be available on www.WatchESPN.com and the Watch ESPN app.