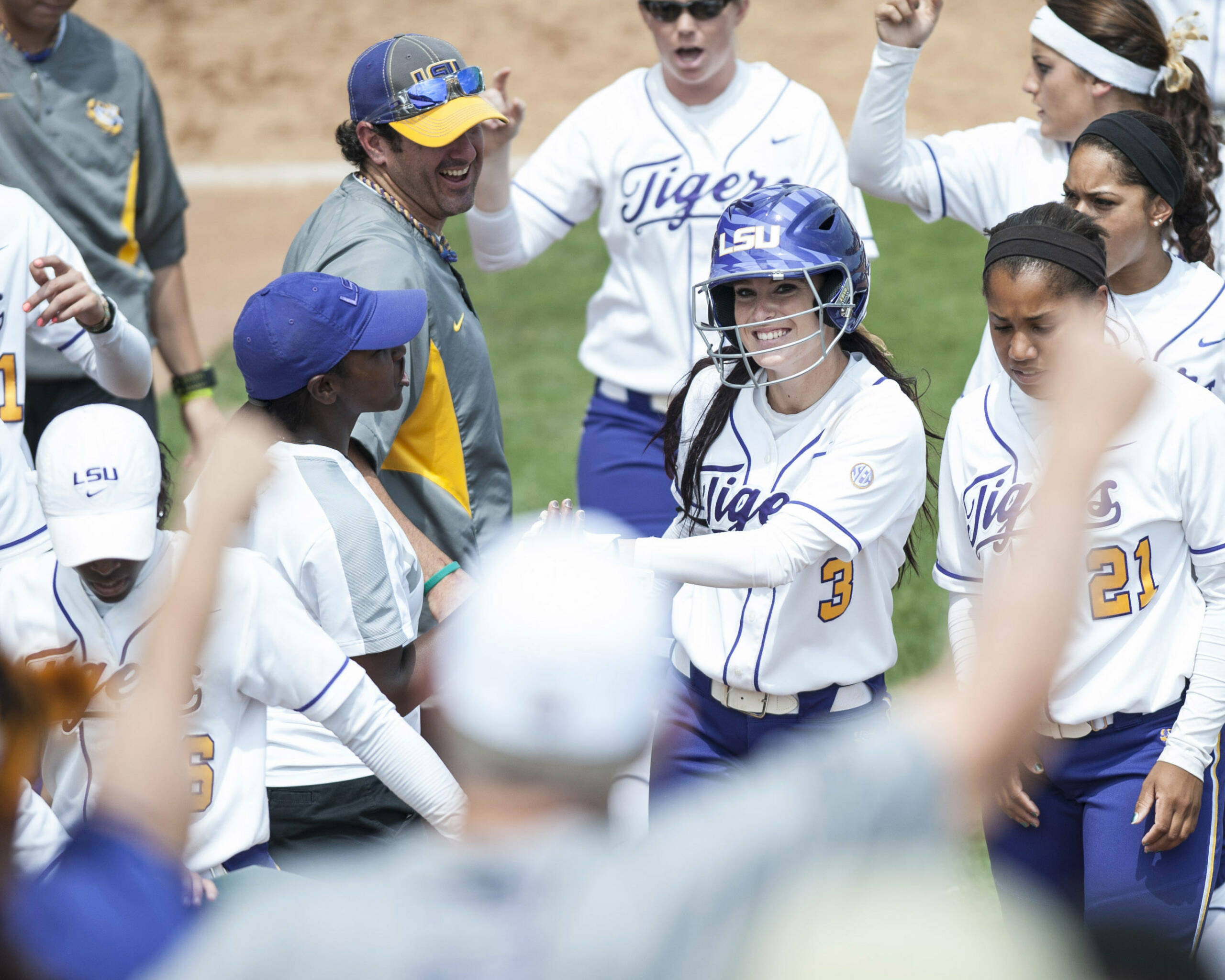 ATHENS, Ga. – The No. 8 LSU softball team finishes up its regular season and travels to Georgia for a three-game weekend set. Game times are scheduled for Friday at 5 p.m. CT, Saturday at 12 p.m. CT and Sunday at 2 p.m. CT from Jack Turner Stadium.

Saturday’s contest will be carried live by Cox Sports Television and Comcast Sports Southeast with Melissa Lee and Barbara Jordan serving as the broadcast team. Sunday’s finale will be televised to a national audience by ESPN with Pam Ward and Michele Smith set to call the action. Both games will be available on www.WatchESPN.com and the Watch ESPN app.

LSU (40-11, 15-6 SEC) has already claimed its 12th 40-win regular season and a share of the program’s conference-leading ninth SEC Western Division title after a sweep of then No. 4 Alabama. The No. 8 national ranking also is LSU’s highest mark since March 25, 2008.

Georgia (35-18, 12-9 SEC) has won seven of its last eight meetings with the Tigers dating back to the 2010 season. The lone exception was a 1-0 LSU victory last season when Rachele Fico fired a four-hit shutout, and Brittany Mack collected a RBI double on Senior Day.

“Georgia can always swing with the best of them, and we will expect nothing less from them,” head coach Beth Torina said. “We know we’re going to have to do a good job handling their offense and provide some of our own. We definitely have to make sure that our strengths are doing well. So, we’ve got to make sure that everybody’s swinging well, we’re fundamentally solid and that we’re doing a good job of just excelling at the things that we’re good at individually.”

LSU’s pitching staff of Rachele Fico, Ashley Czechner and Meghan Patterson has combined for 16 shutouts on the season, while coming away with a 2.02 staff ERA.

Fico, the reigning NFCA National Player of the Week, added two more wins to her ledger during last weekend’s Alabama series to bring her record to 24-9 for the season. Her 24 wins coupled with her 212 strikeouts are ranked second on the SEC.

Fico has secured 11 of LSU’s 15 SEC victories and become the fifth hurler since 2008 to earn a pair of complete game victories over the Crimson Tide. The senior right-hander heads into final weekend of the regular season two strikeouts shy of passing fellow All-American Emily Turner for third place on the program’s all-time list.

Czechner notched another win over a Top 25 opponent during game two of the Alabama series to improve her mark to an unblemished 10-0 on the season. The South Carolina native tossed a complete-game and allowed only one run on eight hits versus Alabama. The one run scored by the Crimson Tide equaled a season’s low.

Patterson has picked up a 6-2 record to go along with her staff-low 1.62 ERA. She went the distance and fired a strong complete game outing her last time out at McNeese State on April 17. The Destrehan native surrendered only one run on three hits and retired 11 of the final 13 batters she faced.

A.J. Andrews and Jacee Blades continue to fuel LSU’s offense from the top of the lineup. The duo has combined for 17 and 16 multi-hit efforts on the season, and both players are ranked among the Top 15 on the SEC hits leaderboard.

Andrews is one of only two players to start in all 51 games and has batted leadoff in every game for the Tigers. She has posted a .354 batting average, second on the squad behind Blades. Aside from having the team’s best batting average, Blades also collected her 100th career hit versus the Crimson Tide to become the 32nd player in program history to reach that feat.

Andrews and Blades are joined by Bianka Bell, Allison Falcon, Kellsi Kloss and Sandra Simmons as players who collected RBIs against Alabama.

LSU’s offensive firepower is largely due to the freshmen trio of Bell, Kloss and Simmons, who have accounted for 20 of the team’s 38 home runs. Bell has ripped a team-leading 11 homers and 45 RBIs to go along with a .340 batting average. She also has recorded RBIs in 15 of her last 18 games and her 45 RBIs are the third-most by a freshman in program history.

Having started in all 51 games this season, Falcon enters the Georgia series with a .262 hitting clip, five home runs and 27 RBIs on the season. Her seven multi-RBI efforts are tied for second on the team with Andrews and Simmons.

Kloss and Simmons collected all three RBIs in the series opening win over Alabama. Kloss cranked a two-run home run during the fourth inning followed by Simmons’ walkoff RBI single in the eighth inning.

Simone Heyward represented the game-winning or game-tying run in all three games of the Alabama sweep. She also contributed a pair of key outfield assists over the final two games of the season. For the season, Heyward has hit safely in six of her last nine appearances to enable her batting average to climb up to a .317 clip.