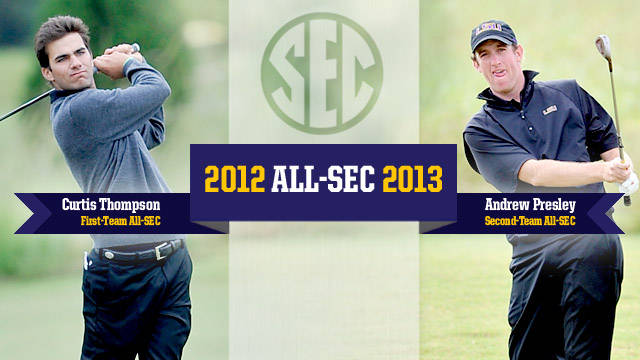 BATON ROUGE – As the 17th-ranked LSU men’s golf team awaits its NCAA Regional seeding to be announced next week, two Tigers have been honored with All-SEC selections as sophomore Curtis Thompson earned first-team honors and junior Andrew Presley earned second-team honors for their performance during the 2012-13 season.

This marks the fifth-straight season in which an LSU golfer has earned First-Team All-SEC recognition as Thompson follows former Tigers John Peterson (2009, 2011), Andrew Loupe (2010, 2011) and Sang Yi (2012) with a first career selection to the all-conference team as one of the emerging talents in college golf.

It also marks the second-straight season in which Presley has been tabbed a Second-Team All-SEC performer after earning his first career all-conference selection as a sophomore a year ago.

The duo has led the 17th-ranked Tigers to another successful season in 2012-13 as the squad is ranked No. 17 nationally in both the Golfweek/Sagarin Performance Index and Golfstat power rankings as they are getting set for another postseason appearance this spring. LSU has won two tournament titles while compiling a 94-37-5 as it awaits a selection to NCAA Regional play being held May 16-18.

The Tigers have won at least two tournament titles for the fifth year in a row as they are the reigning champions at the Shoal Creek Intercollegiate (Sept. 24-25) and David Toms Intercollegiate (Oct. 6-7) held this fall.

A sophomore from Coral Springs, Fla., Thompson is LSU’s 34th First-Team All-SEC selection since 1970 as he ranks as one of the premier performers in all of college golf for the 2012-13 campaign.

Thompson is the No. 8-ranked golfer in the Southeastern Conference and the No. 39-ranked player in the country this season in the latest Golfweek/Sagarin Individual Player Rankings released on Monday evening. He also ranks No. 10 in the SEC and No. 66 in the latest NCAA in the Golfstat Cup rankings published Tuesday morning.

Thompson is LSU’s leading scorer for the season as he has posted a career-low scoring average of 72.9 strokes per round while appearing in all 10 tournaments for the Tigers in 2012-13. He has earned two top-five, four top-10 and nine top-20 finishes in his 10 starts, including his first collegiate victory at the Shoal Creek Intercollegiate with a career-best tournament score of 6-under par 210 in leading the Tigers to the team crown.

The Floridian most recently guided the Tigers at the SEC Championships by tying for 15th place on the leaderboard in his first career appearance at the conference tournament.

A junior from Fort Worth, Texas, Presley is the team’s second-leading scorer with a 73.0 scoring average while also earning the start in all 10 tournaments for the Tigers this season. He leads the program with three top-five and five top-10 finishes this year, while he trails only Thompson with eight top-20 finishes on the campaign. Presley won his second collegiate championship this season at the David Toms Intercollegiate while even leading the Tigers to the team title, while he posted a seasonal-best tournament score of 8-under par 208 in a runner-up finish at the Argent Financial Classic.

By earning his second career Second-Team All-SEC honor this season, Presley becomes the 20th LSU Tiger to receive at least two All-SEC selections during his collegiate career dating back to the 1969-70 campaign.

Both Thompson and Presley will lead the Tigers into NCAA Regional play in two weeks as LSU is set to play host to the 2013 NCAA Baton Rouge Regional being held at the University Club in Baton Rouge from May 16-18. The Tigers will learn their seeding when regional announcements are made on Monday, May 6, at 8 p.m. CT.