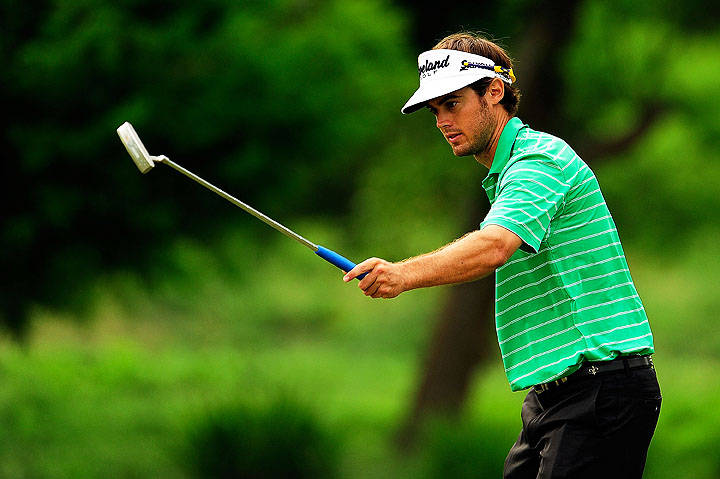 BATON ROUGE – Three members of LSU’s talented Class of 2011 enjoyed strong finishes on the professional circuit this past weekend as John Peterson and Ken Looper were among the top performers at the PGA Tour’s Zurich Classic of New Orleans and Andrew Loupe competed at the Web.com Tour’s South Georgia Classic.

Peterson followed his first appearance at The Masters with a second-straight appearance at the Zurich Classic of New Orleans where he earned his second career Top 10 finish in a PGA Tour event.

After making the cut with rounds of 1-under 71 in Thursday’s opening round and 5-under 67 in Friday’s second round, Peterson catapulted himself into the Top 10 of the leaderboard on the weekend with his scores of 2-under 70 in the third round on Saturday and 5-under 67 in the final round on Sunday to tie for eighth place with a 72-hole score of 13-under par 275.

And Peterson’s impressive birdie-birdie-birdie finish on the back nine Sunday proved to be the difference as picking up those three shots are what earned LSU’s 2011 NCAA Champion not only a $165,000 paycheck this weekend, but also an invitation to compete at the PGA Tour’s Wells Fargo Championship on the strength of his Top 10 finish The Wells Fargo Championship begins Thursday at Quail Hollow Club in Charlotte, N.C.

Peterson carded nine birdies during Sunday’s final round with seven coming after a double-bogey 6 at the par-four fourth hole where his tee shot found the water.

The Fort Worth, Texas, native finished seven shots off the pace as Billy Horschel fired an 8-under 64 in the final round to claim his first PGA Tour victory with a winning 72-hole score of 20-under 268 at TPC Louisiana.

Peterson has now earned $194,354 in his three PGA Tour starts during the 2013 season as Sunday’s finish marked the first time in his career to break par for 72 holes in his 12 PGA Tour appearances. Sunday’s finish also marked his second career Top 10 finish in a PGA Tour event after tying for fourth place at the 2012 U.S. Open Championship in his major championship debut as a rookie a season ago.

“After that (double-bogey), it was good the way I came in,” Peterson told The Advocate’s Sheldon Mickles after Sunday’s events. “It told me a lot about myself and how I can play there after a double-bogey. So, it was good to see that. The car is packed up and ready to go (to Charlotte).”

Looper certainly made the most of his PGA Tour debut at this year’s Zurich Classic of New Orleans as he not only made the cut, but finished on the cusp of the Top 20 in a tie for 21st place on the final leaderboard with a tournament score of 11-under par 277. He posted rounds of 1-over 73, 6-under 66, 5-under 67 and 1-under 71 at TPC Louisiana.

Looper, who teed off in Sunday’s final round at TPC Louisiana in a tie for seventh place and four shots back of the 54-hole leaders, climbed to within two shots of the lead early in Sunday’s round before earning a tie for 21st place in his first PGA Tour start. That performance earned Looper a payday of $58,740 in the first of what he hopes is many PGA Tour starts in his professional career.

Looper earned his spot in the field for the Zurich Classic of New Orleans by winning the Monday qualifier last week with a round of 10-under par 62 at La Tour Golf Club in nearby Mathews, La.

“I was playing well the whole week, up until the back nine today,” Looper told The Advocate’s Sheldon Mickles. “Moving forward, it gives me a lot of confidence that I can play out here. I can compete. Hopefully, I can get another opportunity to show it.”

While Peterson and Looper were among the top performers at the PGA Tour’s Zurich Classic of New Orleans, Loupe claimed his best career finish as a member of the Web.com Tour as he tied for fifth place on the final leaderboard at the South Georgia Classic Presented by First State Bank and Trust held this past weekend at Kinderlou Forest Golf Club in Valdosta, Ga.

Loupe was strong throughout the weekend as he fired rounds of 3-under 69, 4-under 68, 1-under 71 and 2-under 70 to finish in a three-way tie for fifth place on the leaderboard at 10-under par 278 for the weekend. It was five shots off the pace set by champion Will Wilcox, who won the South Georgia Classic title with a score of 15-under par 273.

The Baton Rouge native earned his first career Top 10 finish in 14 career Web.com Tour starts while taking home a paycheck of $23,725 for his efforts. Loupe’s previous best finish on the Web.com Tour was a tie for 13th place at the 2012 Chitimacha Louisiana Open held at Le Triomphe Country Club in Broussard, La., where he fired his career-best 72-hole score of 13-under par 275.