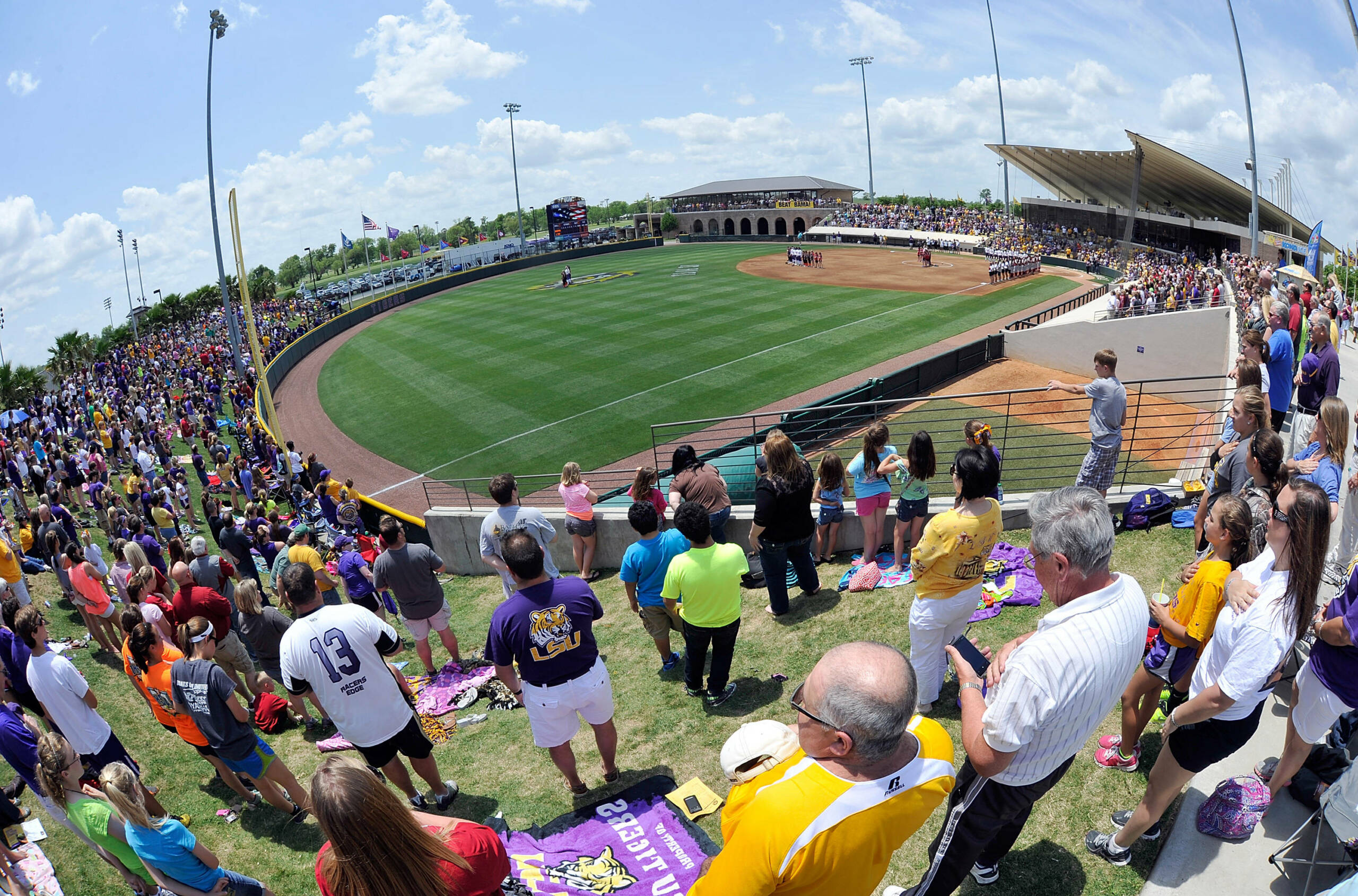 The majority of 3,200 fans had left Tiger Park Saturday afternoon after the final game of the amazing series with Alabama when our softball team reestablished its position in the SEC Western Division with a sweep of the Crimson Tide.

I found myself alone in the LSU Sports Network Radio Booth watching the senior players and their parents on the field and also marveling at the people still on the berm waiting for autographs from the players.

I took a seat and just surveyed what was in front of me and what had just happened this past weekend.

I also reflected on what I’ve been fortunate to be a witness to when it comes to the sport. Has it really been 17 years since Patrick Wright and I found our way into a ground level press box and tried to see anything we could. LSU had its erector-set stadium Tiger Park I, but other SEC teams were playing their first seasons in rec parks, so I guess it wasn’t so bad.

Teams would get hot for a season or two or three, but then things would change. There would be a downward spiral that was hard to get out of and in many cases it meant a coaching change. Some of those changes proved beneficial for the school and for the league. Sometimes it took a couple of changes for success.

One thing that soon became noticeable was that fans were starting to pay attention to this big grapefruit colored ball sport. Like me, they began to understand the multitude of strategies that can be implemented. They began to love strikeouts, long balls clearing fences and that’s not a bunt it’s a slap.

And, most importantly, schools and athletics directors began to understand that facilities for softball teams needed to be really good. Suffice it to say in much of this conference, softball is played in some outstanding facilities. Like Tiger Park II.

What is most amazing is that despite changes in coaching and philosophies and a few issues that seem long ago for both teams, when you talk softball in the SEC Western Division, you only mention two teams – LSU, Alabama.

No one else has won the West – going into this year 8 times LSU, 8 times Alabama. You can already make it 8.5 for LSU after three three-game sweep this past weekend. But this weekend at Tiger Park had so many implications that it’s hard to know where to start.

First of all, for whoever at the Southeastern Conference office that realized it is pretty smart to put some of your best matchups at the end of the season, thanks very much.

For years, that’s where you would find the LSU-Alabama series, but then someone got to monkeying with the schedule and it would turn up at the first of April or worst of all, a mid-week doubleheader to start the conference season. Whose mind went into brain lock that year when making the dates?

But this was the time when it should be played and softball fans at LSU had been waiting to give a nice wonderful “boo” salute to the head coach of Alabama. In case you don’t remember, that Alabama coach was for somewhat less than 72 hours in June of 2011, the head coach of LSU.

Joe Alleva did exactly the right thing when he went after said coach. But what he did was even more impressive. He found a lady named Beth Torina. Ask Yvette Girouard about the state of our softball program. Ask people like Jessica Mendoza, Cheri Kempf and others in the know. Beth Torina has put together a coaching staff that covers all facets of the program from pitching to fielding to hitting to slapping and the players have bought into her system likes ducks to water or in this case Tigers to Habitat.

The system went through a few bumps in 2012 as Torina and the players tried to feel each other out. LSU struggled at times to score and pitchers found themselves pitching great but losing hard-luck games. Look you and I both know the worst thing that could have happened after the “other coach thing” would have been for LSU to have a bad year.

But one thing LSU players do know is NCAA playoffs and suddenly a trip to Texas A&M resulted in the return of timely hitting to support the pitching and hey nice job the Tigers won a regional. Then all of a sudden people in Missouri were asking “Beth who?” as the perennial World Series participants were going down. LSU was in Oklahoma City. What other coach?

This past weekend was for once one of those weekends when a huge amount of hype lived up to its billing. As I said on the broadcast Saturday, “Patrick, who would believe the berm wasn’t big enough?” Patrick remarked there were a few spots of green showing through that people could still find a seat. I quickly pointed out that you would have to step on about 30 or 40 people to get to those spots.

There were 2,600 Friday night to take down all the attendance marks at Tiger Park and then the next day, the number goes up 600 more. I won’t call it shocking, but if it was a referendum on our players and their coaches, the voting is closed and the exit polls show we have a winner.

There is something special when two good softball teams get together. Throw in our rowdy fans and the fact that the stands are right on top of the field and it is an atmosphere that is tough to beat. I’m not really sure what the capacity of Tiger Park is anymore after these three games.

LSU and Alabama are good teams, two in the best of the nation. There is every reason to believe that with the breaks falling the right way, they could both be in Oklahoma City in late May. That coach is happy where he is. I’m glad. He’s a good guy and a good coach; I’ve known him for years.

But let me tell you what everyone saw this weekend at Tiger Park – they saw an LSU team that is very good indeed. They also saw a coach in Beth Torina who knows how to manage a game in a way that gives her team a heck of a chance for her Tigers to go a long way.

In 17 years (in this modern era of LSU softball), there have been some great players and great teams to wear the Purple and Gold at LSU. The book isn’t quite written on the 2013 team yet, but the three games last weekend against Alabama are games that will always be remembered in the history of the program.

Funny thing about this sport – Northwestern State comes to town Tuesday night. They are pretty good. There’s not a lot of time to celebrate. There’s always someone waiting to knock you off the pedestal. So game faces back on folks … there are games to be played.  Geaux Tigers!