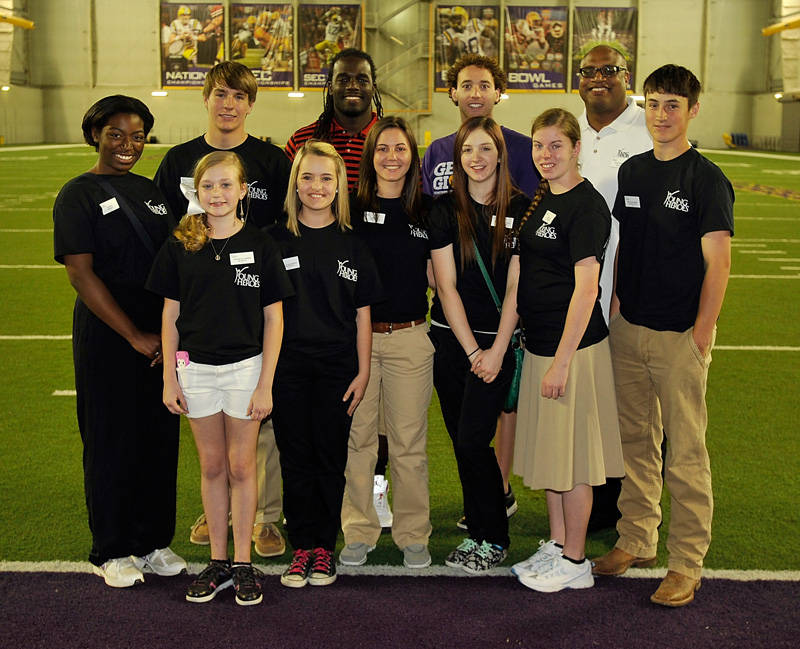 “The opportunity to serve the greater community is the mantra of Rotarians and one of the goals of the Cox Communications Academic Center for Student-Athletes,” Kenneth Miles, Assistant Vice Chancellor and Executive Director of the Cox Communication Academic Center for Student-Athletes, said. “The synergy between these two organizations are a natural bond.”

“As a Rotarian, I was truly honored to serve as a Young Heroes mentor. It is the one times of the year that we learn so much about what it means to overcome adversity. Our young heroes are truly an inspiration. I only wish that I, too, have the strength and fortitude to do as they do every day.”

Craig Loston and James Hairston of football, Timmy Dasinger, Kyra Jones and Andrew Muller of Swimming and Diving, John Michael Busch and Eric Perez of Tennis and Morgan Ruhl of Soccer were paired with one of the young heroes for the event.

“The 2013 Young Heroes event was made even more special this year with the presence of LSU’s Geaux Givers,” Jude Barbier, Baton Rouge Rotarian and 2013 Young Heroes Co-Chair said. “These student athletes unselfishly gave of their free time to spend it with our Young Heroes. Through their mentorship, our honorees were able to get to know the athletes and build goodwill and better friendships that they will cherish forever.”

Now in their 18th year, the awards honor students in grades 7-12 who excelled in the classroom, served their communities, overcame adversity and inspired everyone around them. The winners and their families were honored with ceremonies at the Governor’s Mansion and the Crowne Plaza Hotel in Baton Rouge.

“It was such an honor to spend the day with the Young Heroes,” Dasinger said. “Each hero has an inspiring story of overcoming an obstacle in his or her life. I had a great day with them, and I look forward to keeping in touch my hero.”

Acadian Ambulance, Blue Cross and Blue Shield of Louisiana and ExxonMobil have provided underwriting support for this year’s awards.

This year’s winners were:

The student-athletes met the young heroes at the Crown Plaza Hotel and were each paired up. The event was kicked off with a welcome introduction and proclamation address from Baton Rouge Mayor Kip Holden.

Following the visit to LSU, the group had lunch at the Governor’s Mansion. Lt. Governor Jay Dardenne participated in the recognition ceremony. The event was capped off with a Young Heroes Ceremony following dinner.