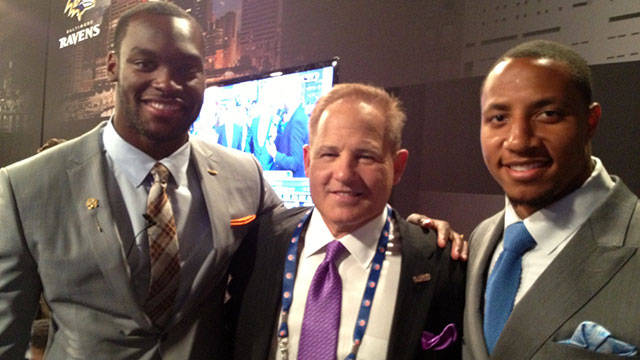 NEW YORK — For the second time in as many years, two LSU football players were taken in the first round of the NFL Draft. On Thursday night at Radio City Music Hall, defensive end Barkevious Mingo was the sixth overall pick by the Cleveland Browns and safety Eric Reid was the 18th pick by the San Francisco 49ers.

Mingo, a 6-foot-5 junior defensive end from West Monroe, La., gave the Tigers the No. 6 pick for the second-straight year – Morris Claiborne was Dallas’ first-round pick last year at No. 6.

“It was just an exciting moment,” Mingo said after his selection. “It snuck up on me. I can’t wait to get to Cleveland. It is such a loyal fan base with hard-working people. They love their Browns – rain, sleet or snow. I am focused on the next chapter in my life and ready to get to work.

“The past week has been one to remember, especially having my family here. I would like to thank all of the LSU Tiger fans who cheered me on the last three years. I am very thankful. I’ll never forget the crowd noise and everything about ‘Death Valley’. Going to LSU helped me reach my dreams of playing in the NFL.”

“I am ecstatic to be a 49er,” Reid said. “It’s a privilege to go to an organization as well respected as San Francisco. It’s definitely a dream come true. When I met with Coach (Jim) Harbaugh at the (NFL) Combine, he was very confident in my knowledge of the game. We chit-chatted after that. I want to be a jack-of-all trades at the next level. Whether that is covering the slot or blitzing, I am willing to do whatever coach wants me to do. When I think of the 49ers, I think of great players. I have followed them for a long time.”

LSU Tigers in the Draft

As many as 14 LSU players may be drafted in 2013 including Mingo and Reid, who were invited to New York City for the draft.

The LSU record for players taken in a single draft is eight, which was set in 1948. Twice under Miles, in 2006 and 2008, LSU has had seven players selected. Tennessee holds the SEC mark for number of players taken in the modern era of the draft with 10, while Ohio State has the national mark of 14.

Check back throughout the night for updates, or join the conversation below or on www.Facebook.com/LSUfootball.