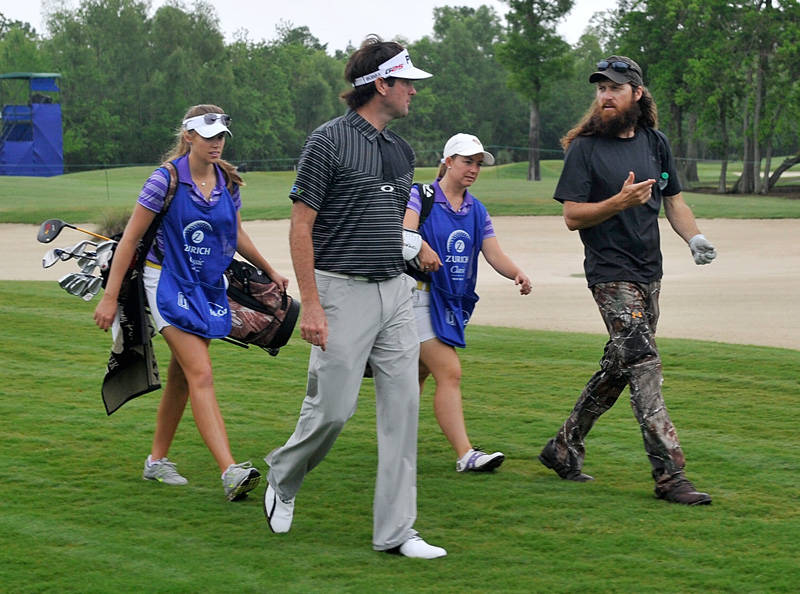 AVONDALE, LA. – Although the date was rain shortened, the LSU women’s golf team continued its annual tradition of caddying for one of the main celebrity groups on the day before the PGA Zurich Classic of New Orleans stop at the TPC of Louisiana.

This year, after caddying for such celebrities as comedian Bill Murray and the Manning family, the LSU Lady Tigers and coaches Karen Bahnsen and Alexis Rather spent the day caddying for 2012 Master’s Champion Bubba Watson, PGA star Ricky Fowler and they stars of “Duck Dynasty” – CEO Willie Robertson, brother Jase and associate Justin Martin.

Also in the group were Farmers Insurance CEO Jeffrey Dailey and Dick Kearn with the presenting Zurich Insurance Company. CEO Martin Senn announced the company will continue to sponsor the event through 2019.

The bad weather came through after about nine holes, forcing a lengthy delay in which the Duck Dynasty stars and Bubba Watson played to the local and national media.

“He’s the greatest,” Jase said on PGATour.com of Watson, the 2012 Masters champion and winner of the 2011 Zurich Classic. “He’s a legend,” Willie added.

“I didn’t say it this time,” Watson responded. “They said it.”

The brothers apparently met Watson on social media and have been fast friends ever since, acknowledging that they have similar likes and dislikes.

“We share a lot of the same values,” Willie said.

The classic tees off on Thursday and features three former LSU golfers – major champion David Toms, former NCAA champion John Peterson and Monday qualifier Ken Looper. The event will be telecast on Thursday and Friday on the Golf Channel and on CBS Sports Friday and Saturday.