No. 12 Softball Readies for No. 4 Alabama 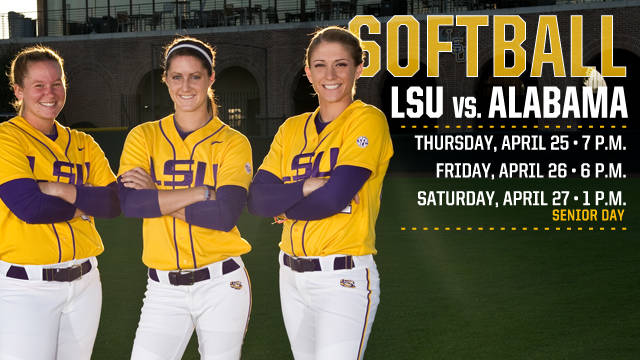 BATON ROUGE – The No. 12 LSU softball team squares off with its third straight SEC ranked opponent and plays host to No. 4 Alabama for a three-game weekend series which could potentially determine the SEC Western Division title at Tiger Park. Games times are slated for Thursday at 7 p.m., Friday at 6 p.m. and Saturday at 1 p.m.

All three games of the series will be broadcasted by the LSU Sports Radio Network on Country Legends 104.9 FM in Baton Rouge and can be accessed by Geaux Zone subscribers at www.LSUsports.net/live with Patrick Wright and Kent Lowe set to call the action.

Thursday’s contest will be televised to a national audience by ESPN2 with Beth Mowins and Jessica Mendoza serving as the broadcast team. The game also will be available on www.WatchESPN.com and the Watch ESPN app. Saturday’s finale will be carried by Cox Sports Television with Lyn Rollins and retired LSU softball coach Yvette Girouard set to call the action. Friday’s game will have live video available inside the Geaux Zone at www.LSUsports.net/live.

LSU will pay tribute to Rachele Fico, Katie Guillory and Lauren Houston as part of Senior Day festivities after Saturday’s game. The first 500 fans will receive a LSU foam claw.

“Rachele, Katie and Lauren have been a huge part of this program,” head coach Beth Torina said. “It is always a sad day on Senior Day. These three definitely have a special place in my heart, and they have done so many things. Lauren and Katie really get the crowd going. They always keep us going and focused at practice. Rachele has been such a presence in this program for four years. It will be a sad day, but it will be a fun day to honor these three players that deserved to be honored.”

LSU (37-11, 12-6 SEC) and Alabama (40-7, 12-6 SEC) head into this weekend’s action tied for first place in the SEC Western Division standings. Both programs have won five of its six SEC series. The Tigers dropped two of three to then-No. 12 Missouri, while the Crimson Tide won two of three versus Mississippi State last weekend.

Alabama, the defending national champions, are being led by Kayla Braud, Kaila Hunt, Haylie McCleney and Jackie Traina, all Top 25 finalists for the USA Softball Player of the Year award. Braud, Hunt and McCleney have each posted over .400 batting averages on the season, while Hunt has ripped 12 home runs and a team-leading 51 RBIs. McCleney’s 69 hits and Braud’s 64 hits are ranked tied for second and fifth on the SEC leaderboard.

Traina is a dual threat for the Crimson Tide and has collected a 17-4 mark in the pitcher’s circle. The reigning Women’s College World Series MVP has recorded 176 strikeouts, fifth-most in the SEC, over her 151.2 innings of works. She also boasts a .368 hitting clip, 13 home runs and 44 RBIs.

“We are excited to host Alabama and are excited to have another challenging SEC weekend,” Torina said. “They are extremely talented and have a fantastic pitcher in Jackie Traina. She is definitely going to be tough on our offense all weekend. We will try to adjust as the game goes on, be prepared for her as much as we can and see what our offense can do.”

LSU’s pitching staff of Rachele Fico, Ashley Czechner and Meghan Patterson have combined to fire 16 shutouts of the season, while the staff has come away with a SEC-low 2.00 ERA during league play.

Fico has turned in a 22-9 mark and racked up a SEC-leading 206 strikeouts over 186.1 innings. The senior right-hander enters the Alabama series eight Ks away from eclipsing fellow All-American Emily Turner for third place on the program’s all-time list. Her 10 shutouts are tied for fifth nationally. In SEC action, Fico ranks in either first or second place among the league leaders in wins (9), ERA (1.78), strikeouts (85) and opponent batting average (.182).

Czechner has won all nine of her decisions and tossed a two-hit shutout versus No. 12 Missouri during the program’s second annual “Strikeout Ovarian Cancer” event on April 20. It marked the first time on the season that the potent Mizzou offense had been shutout.

Patterson has picked up a 6-2 record to go along with her staff-low 1.62 ERA. She went the distance and fired a strong complete game outing her last time out at McNeese State on April 17. The Destrehan native surrendered only one run on three hits and retired 11 of the final 13 batters she faced.

“Ashley did a great job, and I thought that was one of the better games that she has thrown,” Torina said. “Every pitcher wants to pitch with that kind of offensive support. She worked ahead, and it was fun watching her pitch this weekend. Missouri has one of the best offenses by the numbers in the conference right now. Knowing that, I think Rachele held her own. I know that she will continue to do that throughout the season. She will continue to lead us and carry this team without question.”

A.J. Andrews and Jacee Blades continue to spark LSU’s offense from the top of the lineup. Both players are ranked among the SEC’s Top 15 hits list. Andrews has driven home 28 RBIs, second-most on the squad whereas Blades goes into the Alabama series two hits shy of becoming the 32nd player in program history to reach 100 career hits.

Allison Falcon has checked in with a .277 hitting clip, five homers and 26 RBIs. She has recorded hits in eight of her last 13 outings, while her seven multi-RBI efforts are tied for second on the squad. Rikki Alcaraz has chipped in a .351 batting average, three home runs and 18 RBIs.

LSU’s freshmen trio of Bianka Bell, Kellsi Kloss and Sandra Simmons have accounted for 18 of the team’s 36 home runs. They also have racked up 40.1 percent of the team’s RBIs for the season. Bell has headlined the Tigers with 11 dingers and 43 RBIs. The 43 RBIs for Bell are the third-most by a freshman in program history.

“The future of this program is bright with those guys,” Torina said. “They have really led the offense and done so many good things for us. Kellsi was good all weekend and stepped up her play as of late. Sandra has been good all season, and Bianka has really come into her own lately.”

The Tiger Park Ticket Office will open 90 prior to the first pitch. Fans can purchase tickets on-site starting at $5 for adult general admission and $3 for youth ages 3-12.