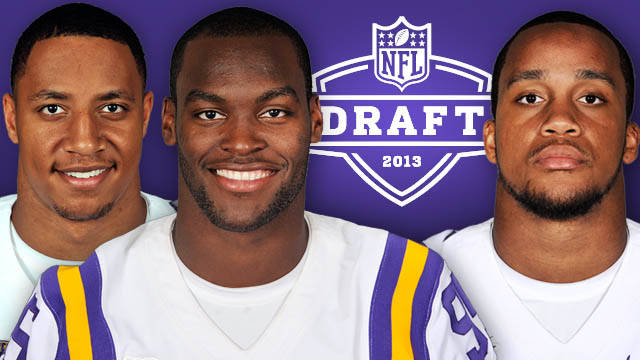 BATON ROUGE – The next three days could be historical for the LSU football program as the Tigers may see as many as 14 former players selected in the NFL Draft, which starts on Thursday and runs through Saturday at Radio City Music Hall in New York City.

The first round starts at 7 p.m. CT on Thursday and can be seen live on ESPN and the NFL Network. Rounds two and three will be held starting at 5:30 p.m. CT on Friday with rounds four through seven taking place on Saturday beginning at 11 a.m. CT.

Two former Tigers – defensive end Barkevious Mingo and safety Eric Reid – have been invited to New York and will be on hand at Radio City Music Hall for the first round on Thursday. They will be joined by head coach Les Miles, who will be making appearances each day on the NFL Network.

Mingo, one of LSU’s school-record 11 early departures, has been projected as high first round draft pick, while Reid, along with linebacker Kevin Minter, are expected to be picked late in the first round.

LSU has had 35 first round NFL draft picks, including 10 under Miles. Last year, cornerback Morris Claiborne (No. 6 overall) and defensive tackle Michael Brockers (No. 12 overall) were the latest LSU players to be taken in the first round.

The LSU record for players taken in a single draft is eight, which was set in 1948. Twice under Miles, in 2006 and 2008, LSU has had seven players selected. Tennessee holds the SEC mark for number of players taken in the modern era of the draft with 10, while Ohio State has the national mark of 14.

As far as Miles is concerned, he will make appearances on the NFL Network for three straight days beginning with a college football roundtable at 4:45 p.m. CT on Thursday. Miles will be joined for the roundtable discussion by Notre Dame head coach Brian Kelly, Texas A&M head coach Kevin Sumlin and Stanford head coach David Shaw.