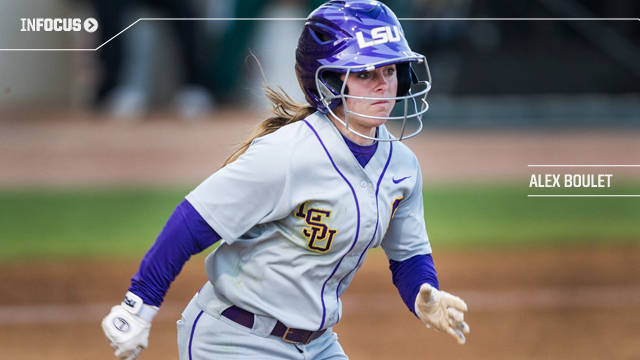 The crowd at Tiger Park anticipates the moment.

Even the videoboard has the screen ready to recognize what is about to happen.

The crowd erupts in a chorus of “boos” as she puts her helmet on and leaves the dugout to take her place at first base.

Tiger Park newcomers might think the crowd is annoyed, but Tiger softball fans are celebrating Alex Boulet’s arrival into the game.

“It helps knowing that I have so many people behind me and so many people who believe in me,” Boulet said.  “It just makes me more on my toes, and it gets me ready for what I’m going to do.”

Torina knows exactly what Boulet is about to do: be a game-changer on the base paths. She makes sure that Boulet comes into the game in the most important of situations.

“What she does is so significant,” Torina said. “I want to make sure I don’t waste her.”

Boulet may not be in the game for long, but she understands the impact her pinch running has on the outcome.

“I know everybody counts on me as a game changer,” Boulet said.  “Entering the game gives me an opportunity to make things happen.  I can catch the other team off guard because they haven’t seen me yet.”

Last week at No. 10 Texas A&M, the Tigers lost the series opener by a 6-2 score. In game two, the Aggies rallied to tie score at 6-6 to force extra innings.

Tammy Wray started LSU’s eighth inning and drew a leadoff walk. Enter Boulet, who would eventually score the game-winning run on A.J. Andrews bunt single. The Tigers went on to score three runs and ultimately won the series finale by a 10-2 margin.

“I feel so confident that we are going to score a run when she is out there,” Torina said. “She’s definitely the best base runner I’ve ever gotten to coach. She just has great instincts on top of being extremely fast.”

Boulet understands that being a good base runner takes more than speed.

“To be a good base runner, you have to take intelligent risks,” Boulet said. “You have to keep in mind what the other team’s weaknesses are and play to your strengths.”

Over her career, Boulet has scored 33 times as a pinch runner which includes an impressive 10-for-14 clip this season. She also has added 38 career stolen bases.

Boulet’s presence is felt in the dugout as much as it is on the playing field.  She is one of the most energetic players and helps lead the cheers to pump the Tigers up in the dugout.

“I’m just so thankful that she’s part of this program,” Torina said.  “She raises the level of everyone around her because she works so hard.”

Boulet not only works hard on the field, but also in the classroom.  As a math major, she won the NCAA Elite 89 Award given to the player with the highest GPA among the eight teams that qualified for the 2012 Women’s College World Series.

“It was really exciting to hear my name called at the World Series banquet; I had no idea it was coming,” Boulet said.  “I was really glad because I do work really hard.”

For many people, college is a chance to get away and experience something new.  The Crowley, La., wanted to stay in the state she has loved for her entire life.

“There’s no better state than here in my opinion” Boulet said.  “I’ve always loved where I grew up and where I came from, especially having so many teammates from far away. It has really made me realize how lucky I am to grow up here.”

Boulet has been shown how to “Love Purple, Live Gold” for many years.  Not only did she grow up in Louisiana, but she also had former Tiger Lauren Delahoussaye as her high school softball coach.

“Coach Delahoussaye had such a passion for LSU and for the Tigers,” Boulet said. “It really made me have that same passion too.”