No. 11 Softball Returns Home for No. 12 Missouri 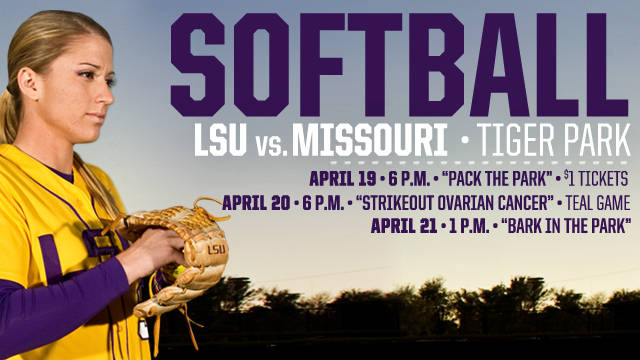 BATON ROUGE – The No. 11 LSU softball team continues its challenging April slate and returns home to meet another ranked SEC opponent as No. 12 Missouri visits Tiger Park for a three-game weekend series. Games times are scheduled for Friday at 6 p.m., Saturday at 6 p.m. and Sunday at 1 p.m.

Sunday’s game will be carried live by Cox Sports Television with Lyn Rollins and retired LSU softball coach Yvette Girouard set to call the action. Friday and Saturday’s contest will have live video available inside the Geaux Zone at www.LSUsports.net/live.

Promotions for the Missouri series include “Pack the Park” and “Student Point Night” for Friday’s opener where the first 1,000 fans will receive koozies. Tickets are available for $1 at www.LSUtix.net.

Saturday’s contest marks the program’s second annual “Strikeout Ovarian Cancer” event where the Tigers will wear teal jerseys in support of the cause. The first 1,500 fans can pick up a “Strikeout Ovarian Cancer” teal rally towel. Leading into the game, LSU softball will celebrate survivors as part of a pregame recognition ceremony. Tickets also are available for $1 at www.LSUtix.net

Sunday’s series finale is the program’s annual “Bark in the Park” game. Always a favorite, fans can enjoy the game with their furry friends. All dogs are required to be on a leash at all times and not allowed to go into the seating areas. There will be a “Canine Cabana” located by section 206 on the third base side concourse.

“We are excited to host Missouri this weekend,” head coach Beth Torina said. “This one has been marked on our calendar because of all of the promotions that go with having a huge SEC series at Tiger Park. Our players are looking forward to wearing teal and raising awareness to help promote education of this disease.”

LSU (36-9, 11-4 SEC) and Missouri (24-6, 9-5 SEC) will meet as conference rivals for the first time after LSU won the 2012 NCAA Columbia Super Regional to secure its spot in the Women’s College World Series. The Tigers have won all five of their SEC series and enter this weekend’s action in sole possession of first place in the SEC Western Division standings.

Last time out, Mizzou dropped two of three games versus Arkansas but has collected a SEC-leading .316 team batting average during league games. Kelsea Roth and Angela Randazzo have driven home 22 and 20 RBIs, respectively, to account for 46.1 percent of the team’s RBIs in SEC play. The duo also ranks 1-2 on the conference leaderboard. For the season, Roth has tallied a .354 hitting clip, 12 home runs and 33 RBIs, while Randazzo checks in at .375 average, eight dingers and 39 RBIs. Nicole Hudson has chipped in a .333 hitting ratio, 10 homers and 28 RBIs.

Chelsea Thomas, a two-time All-American, has logged a majority of the innings for the Tigers in the circle. She has produced a 15-4 mark, a stout 1.46 ERA and held opponents to a .166 batting average. The senior right-hander recorded 146 strikeouts over her 120.1 innings of work. Hudson also has won six of her seven decisions during her 40.1 innings tossed.

“Obviously, it is a big series,” Torina said. “There’s no doubt we’re ready for it, and we know we’re facing a very quality opponent in Missouri. They do a lot of things extremely well and are going to bring their ‘A’ game. Chelsea Thomas is a special pitcher, and I know she will be very tough for our offense to deal with. Hopefully, we can execute well and continue to play our game.”

LSU has won eight of its last 10 games since March 30 and is coming off a 7-1 victory over McNeese State on Wednesday. The Tigers racked up 13 hits as A.J. Andrews, Jacee Blades, Simone Heyward, Kellsi Kloss and Sandra Simmons each garnered multi-hit performances.

Andrews has totaled a team-leading 57 hits for the season and equaled a career-best with three runs scores versus McNeese State. LSU has won all 23 games this season when she crosses the plate. Over her last 10 games, Andrews has notched .486 hitting clip with 11 RBIs. Her .363 batting average and 28 RBIs are both second on the team.

Blades has more than doubled her career hit total entering the 2013 season and has compiled a team-leading .367 hitting clip. She enters the Missouri series four hits shy from becoming the 32nd player in program history to collect 100 career hits. The Baton Rouge native has secured six of her 14 multi-hit efforts over her last 15 games.

“A.J. and Jacee are capable of doing some many things,” Torina said. “They are so versatile. They can bunt, and they can swing away. They can create so many different things with all of their options and speed. When A.J. is on-base, it is just so tough to throw her out. They just make so many things happen at the top of the lineup and create so much pressure on defense.”

Bianka Bell continues her powerful offensive pace and has belted eight of her team-leading 11 home runs during an 18-game stretch going back to March 17. She also has registered 27 of her team-high 42 RBIs which include RBIs in a program-record 12 consecutive games.

Rikki Alcaraz has started 23 of LSU’s last 30 games as the primary option at designated player. She has tallied an impressive .347 hitting ratio, three home runs and 17 RBIs.

Allison Falcon and Sandra Simmons are tied for third on the squad with 25 RBIs apiece. Falcon has hit safely in six of her last 10 appearances, while Simmons has added RBIs in four consecutive games.

Tammy Wray has had 13 of her 24 hits on the season produce RBIs for the Tigers. She is second on the team with seven homers and has collected a team-leading 25 walks.

Simone Heyward, who cranked a three-run double during LSU’s 3-1 triumph in the deciding game of the 2012 NCAA Columbia Super Regional, has been catalyst from the bottom of the order with a .310 batting average. She has swiped nine of her 12 stolen bases versus SEC opponents.

LSU’s pitching staff continues to be solid and has fanned 314 strikeouts over its 309.1 innings of work. The 314 Ks is second-most in the SEC rankings.

Rachele Fico has turned in 22-7 record and added a pair of wins to her ledger last weekend at Texas A&M. Her nine wins, 1.54 ERA and 77 strikeouts during SEC action hold the top spot in each category. The senior right-hander has picked up a SEC-best 198 strikeouts over 172.1 innings and heads into the Missouri series 16 Ks away from passing fellow All-American Emily Turner (2004-07) for third place on the program’s all-time list.

Meghan Patterson made the most of her first start since the Southeastern Louisiana game on March 26 and tossed a strong complete game outing last time out at McNeese State. She surrendered only one run on three hits and retired 11 of the final 13 batters she faced. The Destrehan native is 6-2 with a staff-low 1.62 ERA for the season.

Ashley Czechner has won all eight of her decisions on the season. In her last start, she went six-plus innings en route to a no decision during game two of the Texas A&M series.