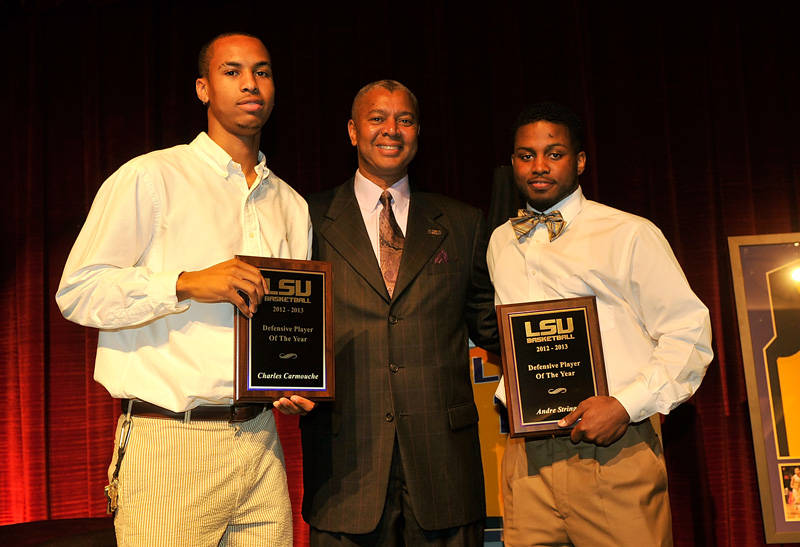 A nice crowd of LSU Tipoff Club Members and basketball fans, including over a dozen former players turned out to salute the Tigers after their 19-win season overall and their breakeven 9-9 record in the Southeastern Conference after starting league play 0-4.

Inside LSU Basketball host Jordy Hultberg emceed the banquet and he was joined on stage by Head Coach Johnny Jones, who completed his first year back at LSU as head coach of the Tigers by winning the second most games of any first-year coach in the last 60 years. He also guided LSU to just the seventh non-losing season in the league in the last 20 years (the first with an 18-game league schedule in that time period).

Among the awards presented by Coach Jones were the following:

Coach Jones invited former LSU coach Dale Brown on stage to present the first Dale Brown award – an award for the player that has demonstrated positive attitude, a strong work ethic and a commitment to excellence – to Jackson, Miss., junior Andre Stringer.

Hultberg would interview LSU’s four seniors (Carmouche, Del Piero, Eddie Ludwig and Mychal Williams) and later Coach Jones had the chance to present the jerseys to the four players. Fans also enjoyed a video featuring individual highlights of the LSU players and some of the important games from the past season.

In looking back at the season, Coach Jones told the gathering that there were several defining moments of his first year at LSU. The first he cited was the Seton Hall game in which LSU came from 16 down in the second half to win its SEC-Big East Challenge game before a raucous crowd in the Maravich Center.

“It was a big moment for us; a turning point,” Jones said.

He also mentioned starting 0-4 in the league. “They came to practice every day after each of those losses trying to get better. They continued to fight and got things back on the right track.”

Coach Jones emphasized two other season defining moments when LSU was able to beat No. 17 Missouri in the Maravich Center and a late-season home win in triple overtime against Alabama when LSU for the third time in the season had to come from a double-digit deficit to get the win. In all LSU won eight games decided by five points or less.