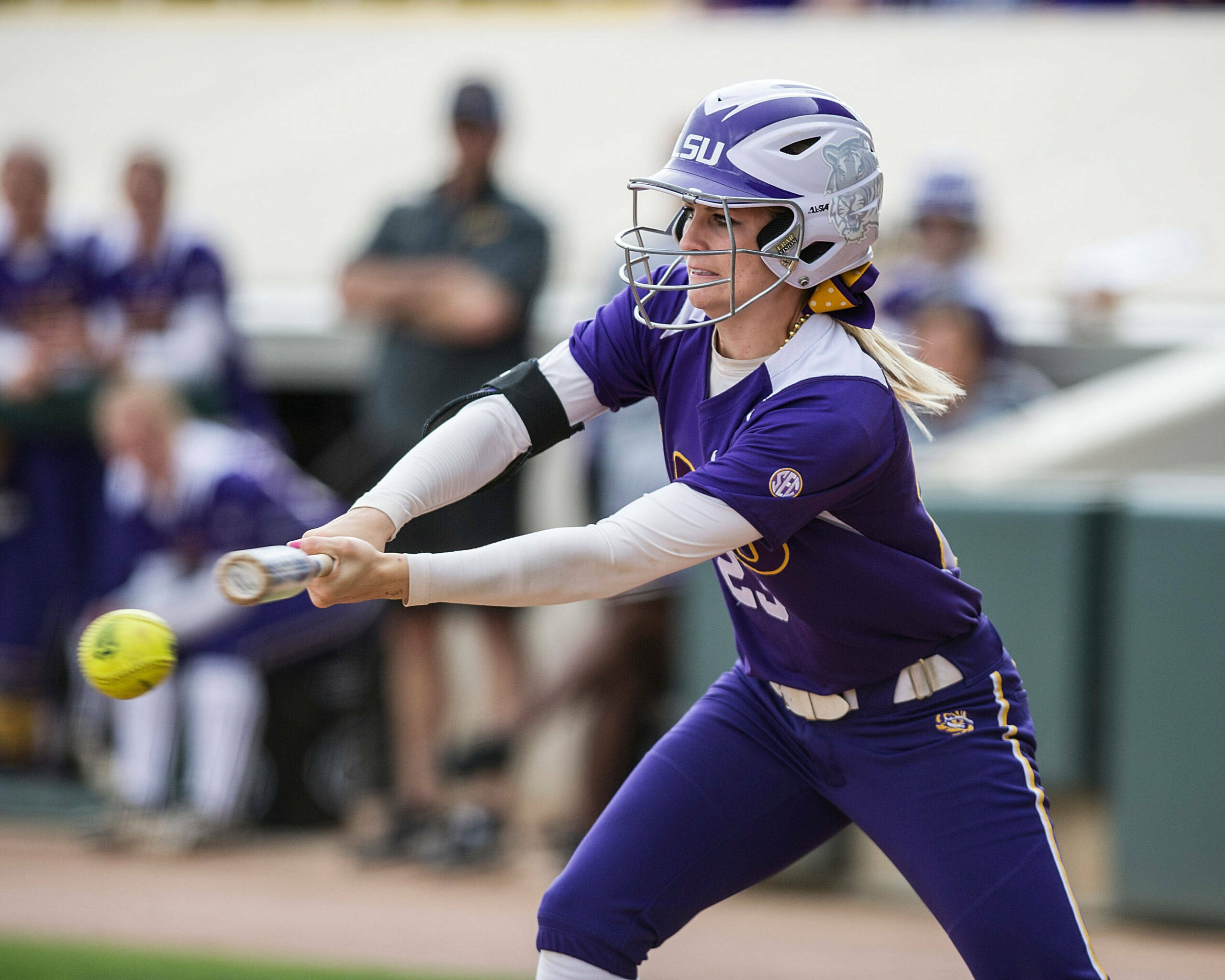 Nominee for SEC Offense Player & Freshman of the Week

Bianka Bell, Fr., Tampa, Florida
Bianka Bell continued her strong play and has picked up RBIs in every game of LSU’s series victory over No. 10 Texas A&M. She now has RBIs in 11 straight games, a program record, previously held by Sara Fitzgerald and Stephanie Hill during the 2003 and 2004 seasons, respectively. The Florida native turned in a 3-for-4 effort and belted her team-leading 10th home run of the season in the series opener. Bell ignited LSU’s seven-run third inning during the rubber game with a leadoff walk. Later in the frame, she added a RBI single.

Rachele Fico, Sr., Oxford, Connecticut
Rachele Fico battled to a pair of road victories as LSU won its fifth straight SEC series versus No. 10 Texas A&M to remain in sole possession of first place in the SEC Western Division. Outside of a five-run first inning during the series opener, Fico was touched up for only one earned run over her last 12 innings of work against a potent A&M offense. She retired six of seven batters she faced in relief, four via the strikeout, as LSU earned a 9-6 eight-inning win in game two. The senior right-hander limited the Aggies to two hits during the Tigers 10-2 run-rule victory to clinch the series.

Notes on the Tigers
No. 13 LSU claimed its fifth straight SEC series and won its last two games at No. 10 Texas A&M. After six weeks of conference play, the Tigers have collected an 11-4 league record to maintain sole possession of first place in the SEC Western Divisions standings. LSU’s offense turned in a balanced effort as 10 players picked up RBIs over the weekend. Bianka Bell led the way with a .364 batting average and ripped her team-leading 10th home run of the season during the season opener. She added RBIs in all three contests to bring her streak to 11 consecutive games with a RBI. The 11 straight games with a RBI is a program record previously held by Sara Fitzgerald and Stephanie Hill’s nine-game runs during the 2003 and 2004 season, respectively. LSU won a dramatic 9-6 decision in game two. The Tigers struck for three runs during the eight inning after the Aggies tallied a four-rally of their own in the home half of the seventh. A.J. Andrews and Jacee Blades smacked back-to-back RBI singles, while Sandra Simmons added another run courtesy of a bases loaded walk. In Sunday’s rubber game, Allison Falcon cranked a two-run homer, her fifth of the season, during the first inning. It was Falcon’s first dinger since the Mississippi State finale on March 10. Tammy Wray added a pair of hits which included a RBI single as part of LSU’s seven run fourth inning. Rachele Fico garnered both victories in the circle for the Tigers and improved to 22-7 on the season. She limited the powerful A&M offense to only one earned run after she was touched up for a five-run first inning during the series opener. The senior right-hander retired six of the seven batters she faced, four via the strikeouts, in a relief win during game two. Fico carried that momentum into Sunday’s series finale where she allowed only two hits. LSU travels to McNeese State [Wednesday – 7 p.m.] before welcoming No. 8 Missouri [Friday – 6 p.m.; Saturday – 6 p.m.; Sunday 1 p.m.] to Tiger Park for a three-game weekend series. Saturday’s marks the program’s second annual “Strikeout Ovarian Cancer” event.