Toms 13th at Masters After Final Round 67 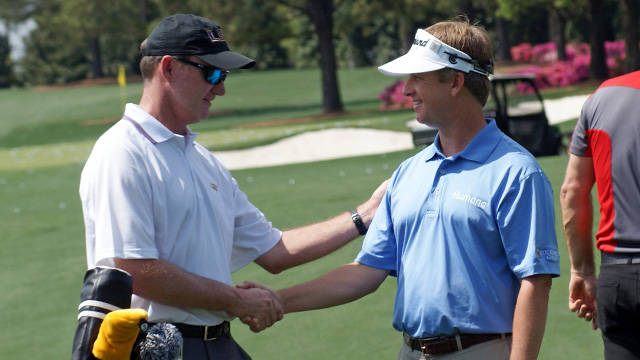 AUGUSTA, Ga. – While carding six birdies on the day, including four birdies in a five-hole stretch on the back nine, LSU alum David Toms fired the lowest score in the field during Sunday’s final round with a 5-under par 67 at Augusta National Golf Club to tie for 13th place on the final leaderboard at the 2013 Masters Tournament.

Toms catapulted himself 25 spots up the leaderboard in the final round while matching PGA Tour veteran Michael Thompson with the lowest score of the day among the 61 players in the field.

The LSU great broke par for 72 holes at The Masters with a tournament score of 1-under par 287 to finish in a tie for 13th place overall along with Fred Couples, Ernie Els, Dustin Johnson and Nick Watney.

After tying one another for first place with matching 72-hole scores of 9-under par 279, Australia’s Adam Scott defeated Argentina’s Angel Cabrera in a sudden-death playoff to win his first major championship and the honor of wearing the green jacket in 2013. Scott drained a 20-foot birdie putt on the 72nd hole to close out his round of 3-under 69 and force a playoff with Cabrera to decide the winner.

Scott clinched the victory by holing a 12-footer for birdie on the second playoff hole – the par-four 10th hole – to win his first career major championship. The Australian came close a season ago when he earned second place at The Open Championship held at Royal Lytham & St. Annes Golf Club in Lancashire, England.

It marks the fifth time in 15 career appearances at The Masters that Toms has finished among the Top 15 of the final leaderboard while tying for 13th place following Sunday’s action.

Toms also tied for sixth place in 1998, tied for eighth place in 2003, finished in ninth place in 2007 and tied for 14th place in 2010 for his best finishes in one of the iconic events in golf. He has actually claimed 10 career Top 10 finishes in major championships, including a victory at the 2001 PGA Championship for his one and only major victory on the PGA Tour.

While Toms made his 15th career appearance at The Masters this week, LSU’s 2011 NCAA Champion John Peterson finished in 60th place in his Masters debut with a 72-hole score of 14-over 302 after making the cut.

Peterson wrapped up the weekend by carding an 8-over 80 in Sunday’s final round after posting rounds of 1-under 71 in the first round, 5-over 77 in the second round and 2-over 74 in the third round. He has made the cut in each of his two major championship appearances as he earned the right to compete at The Masters after tying for fourth place at the 2012 U.S. Open Championship in his major championship debut last summer.