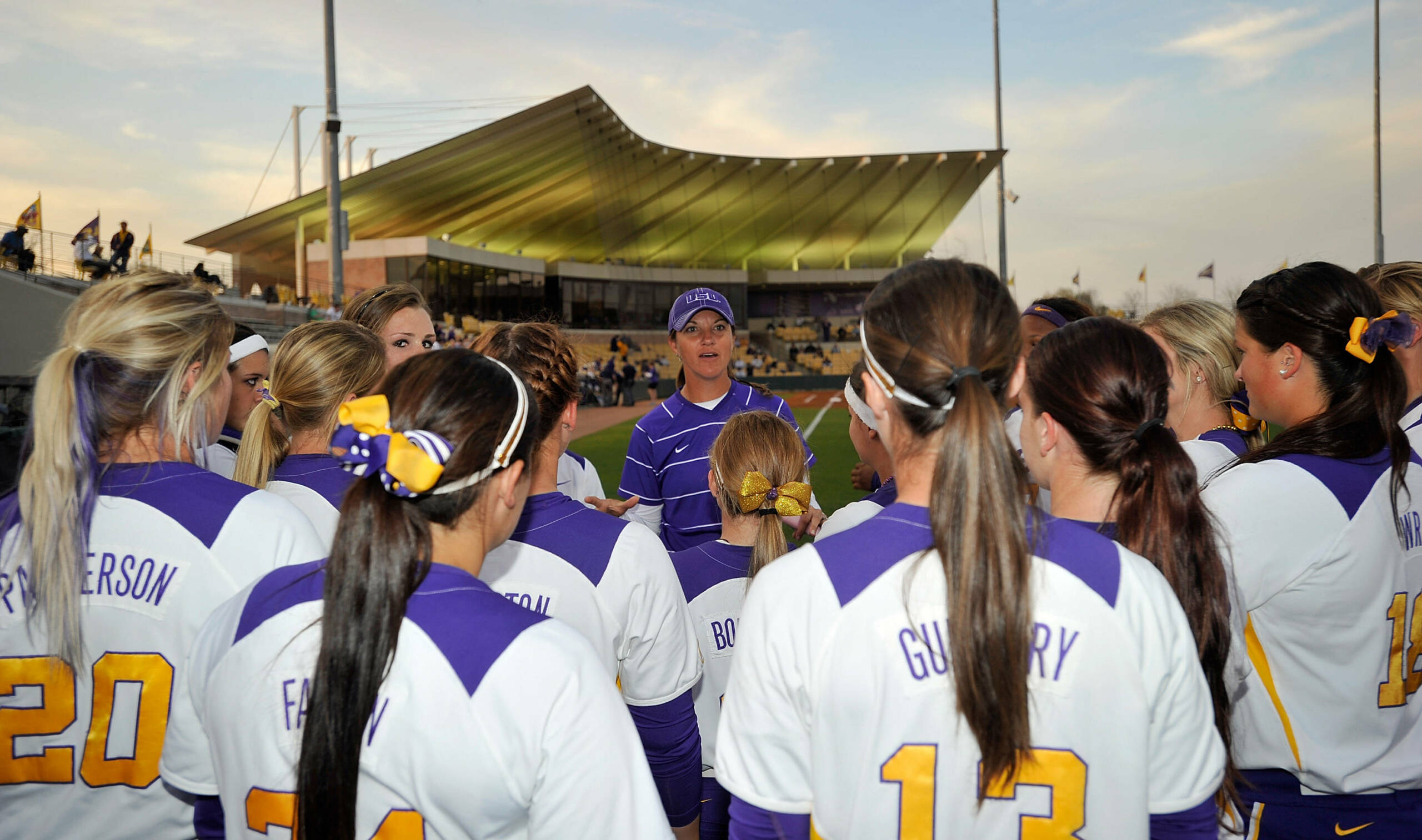 COLLEGE STATION, Texas – The No. 13 LSU softball team will face its toughest SEC challenge of the season to date and continues an eight-game road with a critical three-game weekend set at No. 10 Texas A&M. Game times are slated for Friday at 7 p.m., Saturday at 4 p.m. and Sunday at 12:30 p.m. from the Aggie Softball Complex.

The Saturday and Sunday contests will be televised by ESPN and FSN. Both games will be available online at www.WatchESPN.com and via the Watch ESPN app. The series opener also will have live video courtesy of 12th Man Television and is available to Geaux Zone subscribers at www.LSUsports.net/live.

LSU (33-8, 9-3 SEC) and Texas A&M (33-7, 5-6 SEC) have met in each of the last three NCAA postseasons with the Tigers winning the 2012 NCAA College Station Regional on their way to a Women’s College World Series berth. This weekend’s marks the first meetings between the two programs as SEC rivals.

LSU has won all four of its previous SEC series on the season versus Mississippi State, then- No. 17 Kentucky, South Carolina and and Arkansas to sit in sole possession of first place in the SEC Western Division standings. The Tigers have emerged with wins in 15 of their last 18 games since March 10 which includes a pair of 5-4 comeback road victories over Florida State and Arkansas last week.

Texas A&M has strung together five straight wins to start April and tallied a .317 team batting average fueled by 68 home runs on the season. The Aggies have four players who have already connected for double digit dingers.

Nicole Morgan leads the way with a .394 batting average, 13 homers and 44 RBIs, while Cali Lanphear has turned in a .351 hitting clip to go along with 14 longballs and 38 RBIs. Meagan May, the program’s all-time home runs leader, and Cassie Tysarczyk have chipped in 10 roundtrippers each and a combined 56 RBIs.

In the circle, Mel Dumezich has collected 22 of the team’s 33 victories. She has recorded 176 strikeouts, third-most in the SEC, over her 160.2 innings of work. Dumezich also has tossed six shutouts, earned three saves and limited opponents to a .190 batting average. Lauren Ainsley has come away with a 10-2 mark and a 1.99 ERA over her 74.0 frames of action.

“We definitely understand what a great atmosphere and what great fans Texas A&M has,” head coach Beth Torina said. “There’s no doubt it’s a tough place to play, and we know we have our work cut for us. I’m sure they’re going to want to take us out and get us back from winning the regional there last year. We know that they’re a really quality team. They have a fantastic offense, and have put up huge power numbers. They have a solid pitcher on the mound with Mel Dumezich. We have our work cut out for us, and we’re looking forward to the trip.”

LSU’s pitching staff is sparked by Rachele Fico’s 20-6 record and SEC-leading 185 strikeouts over her 159.1 innings of work. She has already tossed 10 shutouts, tied for third-most nationally.

During SEC play, Fico has won seven of her nine decisions and her 1.17 ERA paces the league leaderboard. The senior right-hander also was named one of 25 finalists for the 2013 USA Softball Player of the Year award earlier in the week.

Meghan Patterson has secured a 5-2 mark with a staff-low 1.69 ERA. She collected a win over Southeastern Louisiana during her last start on March 26 and struck out the side in a relief appearance following Czechner against Samford.

Ashley Czechner has picked up wins in all eight of her decisions and was handed a no-decision during her last start at Arkansas. She hasn’t given up a run in three of her last five starts going back to March 15 and equaled a season’s best eight strikeouts during five innings of three-hit ball versus Samford.

“Ashley has done some great things the last few times we’ve put her out there in SEC play,” Torina said. “She competes with the best of them, and I think that she’s still continuing to improve every time she goes out. I’m confident in what she’s going to be able to do in the next few weeks as well.”

The LSU offense has registered a .292 team batting average, 45 points higher than the unit’s clip through 41 games a season ago. The Tigers also are averaging a full run better over 41 games this season as compared to last season.

Bianka Bell, the reigning two-time SEC Freshman of the Week, has racked up a .328 hitting clip and provided a team-leading nine home runs to go along with 36 RBIs. She has tallied a RBI in eight consecutive games, the last time a LSU player accomplished the feat was Vanessa Soto in 2005.

A.J. Andrews and Jacee Blades have continued to pace the Tigers with .364 and .362 batting averages, respectively. The duo are ranked inside the SEC’s Top 15 in total hits and have combined to rack up 26 multi-hit performances from the top of the order. Andrews has crossed the plate a team-leading 32 times, and LSU has won all 20 games this season when Andrews scores.

Allison Falcon has hit safely in three of her last six games. She is hitting .281 with four home runs and driven home 23 RBIs. Her 23 RBIs and six multi-RBI performances are tied for second on the squad.

Rikki Alcaraz has started 20 of LSU’s last 26 games at the designated player spot. She has garnered 22 hits en route to a .349 hitting clip, three home runs and 16 RBIs.

Simone Heyward played a major role in LSU’s 5-4 comeback wins versus Florida State and Arkansas. During the Arkansas rally, she fought for a pair of walks and scored key runs after she fell behind 0-2 in the count. Heyward scampered home with the game-tying run on Andrews’ RBI-triple.

Tammy Wray and Sandra Simmons have produced 21 and 20 RBIs for the season. Like Falcon, Simmons has notched six multi-RBI efforts. She recorded three RBIs during the Arkansas opener and made a pair of spectacular defensive in the late innings of the comeback win in the Arkansas finale.

“Sandra is a tough, gutsy and knowledgeable player,” Torina said. “She’s always one step ahead and really understands the game. I think she’ll do anything it takes to win and to get the out at first base. She was fantastic for us on defense and had some key moments offensively as well.”