Fico Among USA Softball Player of the Year Finalists 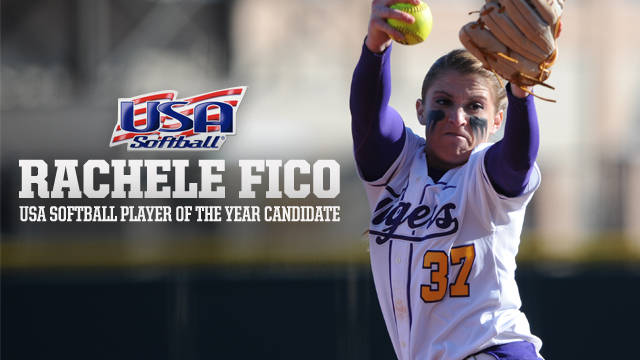 OKLAHOMA CITY, Okla. – LSU pitcher Rachele Fico was chosen as one of 25 finalists for the 2013 USA Softball Collegiate Player of the Year award Wednesday as announced by the Amateur Softball Association [ASA] of America and USA Softball.

The award, which is considered the most prestigious honor in Division I women’s collegiate softball, is designed to recognize the outstanding athletic achievement by female players across the country.

Fico has been a Top 25 finalist for the honor in each of the last two seasons and remains among fellow All-Americans Britni Sneed, Leslie Klein, Kristin Schmidt and Kirsten Shortridge as the only LSU players to be named as USA Softball Top 25 finalists. Sneed and Schmidt were among one of 10 finalists for the award during the 2002 and 2003 seasons, respectively.

“Rachele is very deserving of every honor and every accolade she receives,” head coach Beth Torina said. “We’re extremely pleased that she has once again been recognized among the nation’s elite as a Top 25 finalist for USA softball’s prestigious award.”

Fico has turned in a 20-6 record and amassed a SEC-leading 185 strikeouts. She is one of only three pitchers to post a trio of 20-win seasons in their LSU career. During SEC play, the Connecticut native has won seven of her nine decisions and her 1.17 ERA paces the league leaderboard.

Fico has fired 10 shutouts, tied for third-most nationally, highlighted by her second career no-hitter versus Ohio State earlier this season. Over her career, 32 of her 74 victories have come courtesy of the shutout.

Fico has already passed fellow All-American Brittany Mack and Dani Hofer on the program’s strikeout list during the 2013 season. The senior right-hander has racked up 750 career strikeouts and enters the Texas A&M series 28 Ks from tying fellow All-American Emily Turner (2004-07) for third place.

The USA Softball Collegiate Player of the Year award is voted on by coaching representatives from 11 Division I Conferences in the 15 ASA Regions as well as members of the media who consistently cover Division I Softball across the country.

LSU continues its eight-game road swing and meets No. 10 Texas A&M for the first time as SEC rivals. The three-game weekend set begins Friday at 7 p.m. followed by a 4 p.m. start on Saturday and a 12:30 p.m. first pitch on Sunday. The Saturday and Sunday contests will be televised by ESPN and FSN in addition to being available at www.WatchESPN.com and on the Watch ESPN app.

All three games of the series will be broadcasted by the LSU Sports Radio Network on Country Legends 104.9 FM in Baton Rouge and can be accessed by Geaux Zone subscribers at www.LSUsports.net/live.