Two Men's Golfers to Compete in The Masters 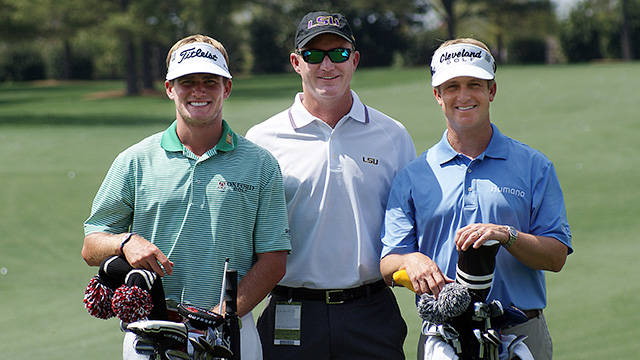 AUGUSTA, Ga. – Two LSU greats are set to compete in the first major championship of the PGA Tour season this weekend as former Tiger All-Americans David Toms and John Peterson tee it up on Thursday’s morning in the first round of the 2013 Masters Tournament being held at historic Augusta National Golf Club.

An invitation-only field of 93 of the best players in professional golf will compete for the right to wear the coveted green jacket as the championship runs through Sunday at one of the iconic venues in all of sport.

Both Peterson and Toms earned their invitational into this year’s field by tying one another for fourth place at the 2012 U.S. Open Championship held last June at The Olympic Club in San Francisco. This weekend marks the 15th time in his professional career that Toms will tee it up at Augusta for The Masters, while Peterson is set to make his Masters debut in the first round on Thursday.

Peterson is actually scheduled to tee off in the very first group of the championship on Thursday morning at 7 a.m. CT alongside Sandy Lyle of Scotland and Nathan Smith of the United States.

Toms will follow in the fourth group of the opening round as he tees off at 7:33 a.m. CT with Richard Sterne of South Africa and Ted Potter, Jr. of the United States.

Toms has enjoyed tremendous success in his 14 previous appearances at The Masters Tournament as he has claimed three top-10 finishes in the event, including a tie for sixth place in 1998, a tie for eighth place in 2003 and a ninth-place finish in 2007. He will look to improve upon his finish from a year ago when he tied for 50th place on the final leaderboard.

Peterson, the 2011 NCAA Champion during his senior season at LSU, is actually in a unique position as the first ever exempt Web.com Tour without any PGA Tour status to secure an invitation to The Masters.