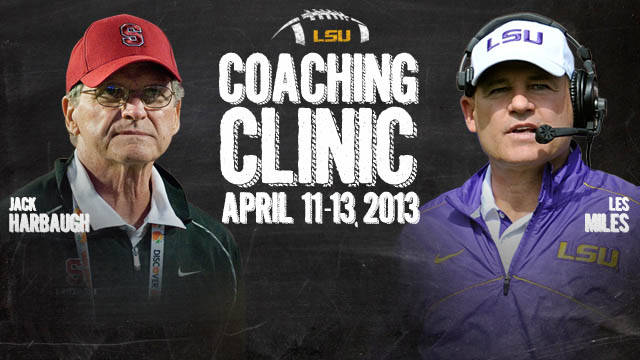 BATON ROUGE – Jack Harbaugh, the father of the only pair of brothers to coach against one another in the Super Bowl, will serve as the headline speaker at this year’s LSU Football Coaches Clinic, which  starts on Thursday and runs through Saturday’s football scrimmage on the LSU campus.

Registration for the clinic remains open at a cost of $50 per coach, which includes meals on Thursday and Friday. Interested coaches should contact Lois Stuckey in the LSU football office at (225) 578-1151 or visit www.LSUsports.net for more information.

The LSU Football Coaches Clinic, which annually features one of the top coaches in the game as the headline speaker, will also feature presentations from first-year LSU offensive coordinator Cam Cameron and one of the nation’s top strength and conditioning coordinators in LSU’s Tommy Moffitt.

Jack Harbaugh was also part of the coaching staff during Les Miles’ playing career at Michigan, coaching defensive backs for the Wolverines from 1973-79. Miles earned two letters as an offensive lineman for Michigan in 1974 and 1975. Jack Harbaugh last coached in 2009, serving as running backs coach at Stanford.

“It’s a tremendous honor to have Jack be a part of our coaches clinic this year,” Miles said. “The Harbaugh family, in particular Jack, has meant so much to me and my coaching career that being able to spend time with him during these three days will be a big thrill. I know that our coaches will benefit a great deal from his presence.”

The clinic starts at 2:30 p.m. on Thursday with registration and LSU football practice that day. Clinic participants are to use the west side entrance of the LSU Indoor Football Facility to register. Following LSU football practice, there will be a barbeque social at 5:30 and the official welcome by Miles. At 7:15, the coaches will take part in breakout sessions by position with members of the LSU coaching staff.

The clinic resumes on Friday at 8:30 a.m. when Moffitt presents to the group of coaches on LSU’s strength and conditioning program. Jack Harbaugh will address the group of coaches at 1:15 p.m. Friday will conclude with the annual crawfish boil social at 6:30 p.m. at the LSU Indoor Facility.

The clinic concludes on Saturday, April 13 at 1 p.m. when the coaches will get to see the Tigers scrimmage in Tiger Stadium.