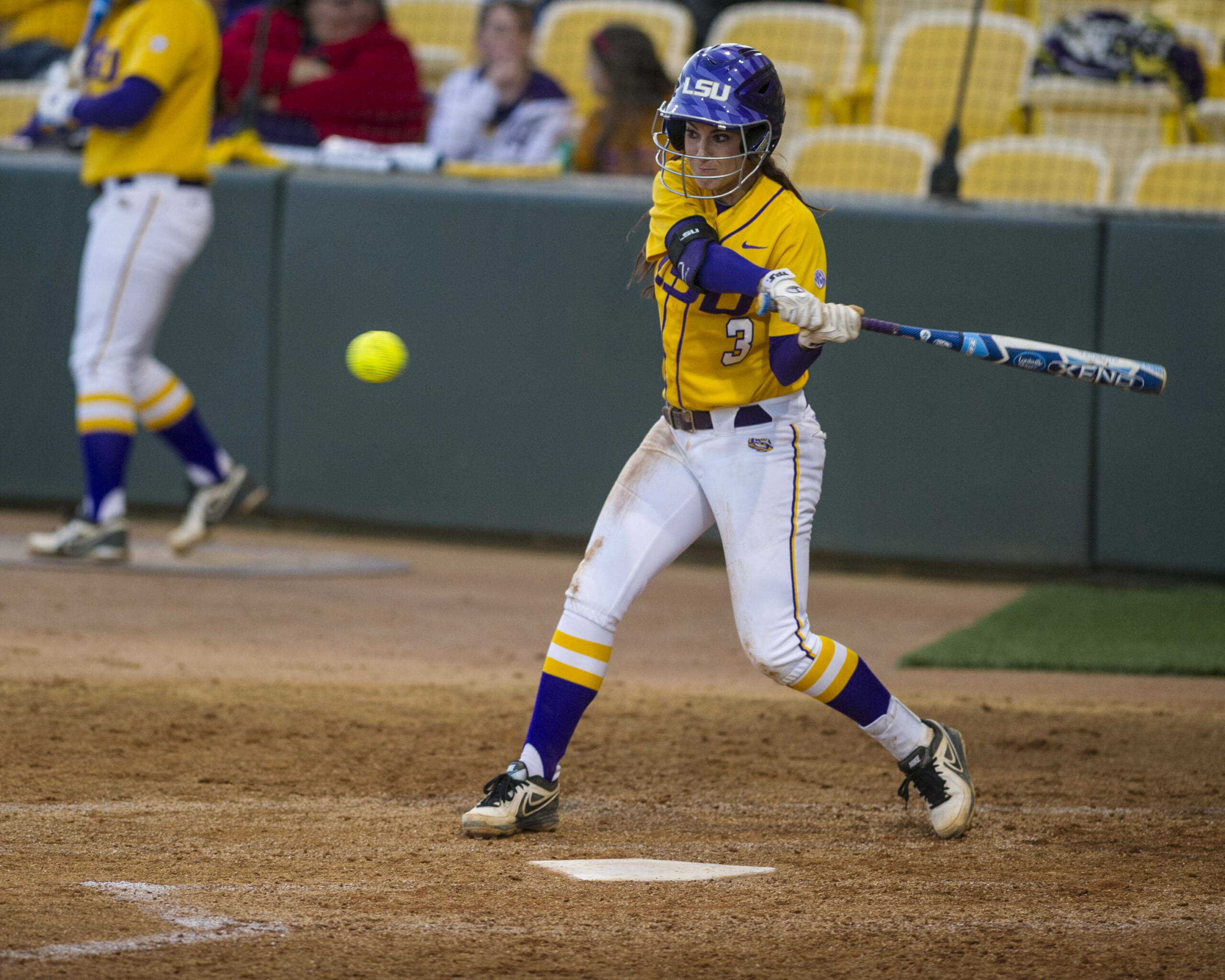 FAYETTEVILLE, Ark. – The No. 13 LSU softball team heads back into SEC action and moves into the heart of its eight-game road swing to start the month of April with a three-game weekend series at Arkansas. Game times are scheduled for Friday at 6 p.m., Saturday at 1 p.m. and Sunday at 1 p.m. from Bogle Park.

All three games of the series will be broadcasted by the LSU Sports Radio Network on Country Legends 104.9 FM in Baton Rouge and can be accessed by Geaux Zone subscribers at www.LSUsports.net/live with Patrick Wright and Matt Dunaway set to call the action. Saturday’s game will be carried live by Cox Sports Television.

LSU (31-7, 7-2 SEC) has won 13 of its last 15 games since March 10 which includes a 5-4 comeback win over Florida State on Wednesday. The Tigers have won their first three SEC series over Kentucky, Mississippi State and South Carolina to sit in sole possession of first place in the SEC Western Division standings entering this weekend’s action.

Arkansas (25-13, 3-6 SEC) is coming off a weekend sweep of then No. 22 Georgia and being fueled by Devon Wallace, the reigning SEC Player of the Week. She homered during all three games versus the Bulldogs which included a walkoff grand slam in the middle game. For the season, Wallace has a .429 batting average to go along with 12 home runs and 26 RBIs. Stephanie Canfield has garnered a team-leading .460 hitting clip whereas Chloe Oprzedek has driven home a team-high 30 RBIs.

In the circle, the Razorbacks are led by Chelsea Cohen’s 12-6 record and 117 strikeouts over 108.2 innings of work. Hope McLemore and Kelly Young have combined for a 9-2 mark and both possess ERA’s of under 2.00 for the season.

“Arkansas has a solid offense, and I know they’ve been swinging the bats really big,” head coach Beth Torina said. “Devon Wallace has been doing some unbelievable things for them at the plate, and their pitching staff has gotten stronger as the season has gone on. As always, we have our work cut out for us every time we take the field in the SEC. This weekend is no exception, and we’ll have to show up with our best to be successful.”

LSU’s offense is sparked by A.J. Andrews and Jacee Blades at the top of the order. Andrews’ team-leading 45 hits are ranked eighth, while Blades’ 43 hits are tied for 12th in the SEC rankings. Blades has garnered a team-best .371 batting average followed by Andrews’ .352 hitting clip.

Andrews turned in a 3-for-3 performance with two stolen bases and equaled a career-high three RBIs during LSU’s 5-4 win over Florida State. For the season, Andrews has tallied 22 RBIs to rank second on the team and is a perfect 14-for-14 in the stolen base department.

Bianka Bell has totaled a .318 average and paced the squad with eight home runs to go along with 31 RBIs. She has picked up a RBI in each of her last five games.

Allison Falcon and Tammy Wray are tied for third on the team with 21 RBIs. Wray is right behind Bell with seven dingers, and Falcon has smacked a team-best eight doubles for the season.

Sandra Simmons has hit safely in 13 of her last 17 outings going back to March 10 en route to a .277 batting average whereas Kellsi Kloss has tallied a .268 hitting clip with nine of her 15 hits on the season producing RBIs. Both players are tied for fifth on the team and have chipped in 17 RBIs for the season.

Simone Heyward and Lauren Houston accounted for all five of LSU’s runs during Wednesday’s 5-4 victory over Florida State. With a pair of hits versus the Seminoles, Heyward has upped her average to the .315 mark. She has registered seven of 10 stolen bases versus SEC opponents.

The Tigers have relied heavily on Rachele Fico in the pitcher’s circle. The senior right-hander has started 20 of the team’s 38 games fueled by 10 shutouts. She is 18-5 with a 1.83 ERA and her 173 strikeouts headline the SEC. She finished Wednesday’s win over Florida State on a strong note and was touched up for only one run after the second inning.

Ashley Czechner has won all eight of her decisions and hasn’t surrendered a run during three of her last four starts dating back to March 13. She matched a season’s best eight strikeouts and fired five innings of three-hit ball in game two of the Samford doubleheader.

Meghan Patterson has tallied a 5-2 mark with a staff-low 1.69 ERA. She collected a win over Southeastern Louisiana during her last start.