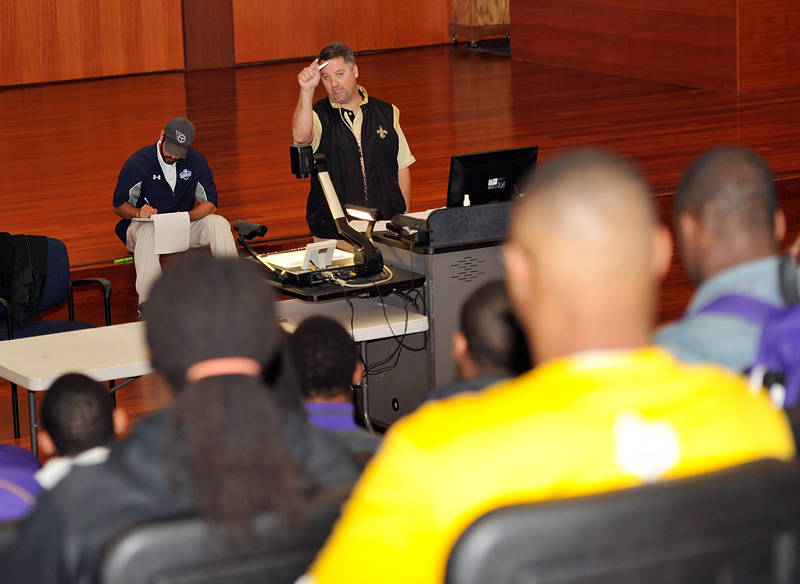 “We have been fortunate to have these dedicated professionals come in and discuss the intricacies of life within the NFL and the scouting process to the NFL,” said CCACSA Director of Academic Affairs, Walt Holliday. “It continues to be well received and a key component to our ‘ladder of success’ program which focuses on the total development of our students with one goal in mind: changing attitudes, changing behaviors, and changing lives.”

Each year an NFL scout starts with a list of over 14,000 senior football players and possibly 60 juniors who decide to leave for the draft early from all divisions of collegiate play. This list gets narrowed down to about 900. The combine only invites 330 players, 60 of which are juniors, and only around 260 people get drafted in eight rounds.

Gorscak explained that the lifespan of a person playing in the NFL was around 3.5 seasons.

Gorscak, who has been with the Steelers organization for 18 seasons, showed the student-athletes one hand with his Steelers Super Bowl ring and said, “This is what you get when you do everything right.”

Gorscak explained the ones who make it in the NFL are the ones who as student-athletes were committed all the time. The student-athletes who go to class, go to tutoring appointment, show up on time, go to practice, go to the training room, getting in extra film and staying home after a major game on Saturday nights are the ones who make it. He stressed the importance of everything that happens on and off the field especially when you think no one is looking.

Baugh, who has been a scout for 22 years, wrote out NFL on the projector and asked the student-athletes if they knew what it stood for.

“NFL stands for not for long,” he said. “Football will let you down. I want to congratulate you on beating the odds already. You are at one of the top football schools in the country.”

At the NFL combine, each team has a room on this long hallway in the hotel. Each team has its banner hanging and one-by-one players come in to talk to the 32 general managers and the scouts. If their paper stayed clean through their college career, then they will have a good time at the combine, but if not it will be a tough day which can ultimately effect your workouts and your chances of making money in the NFL. The scouts work along side retired FBI agents who track and attain information on each athlete.

Salge told the student-athletes that they need impress everyone especially when no one is looking. If coaches or support staff are not willing to give glowing endorsements on a player that is a major red flag to scouts.

“We know that your coaches will give you a glowing endorsement,” Salge said. “But we are looking at what the people on the support staff and the people you should be impressing when you think they aren’t looking.”

“It was very humbling to speak with those coaches. I was happy to learn about what is to be a pro,” said LSU freshman safety, Corey Thompson.

LSU freshman cornerback, Dwayne Thomas said, “It was a great meeting them. I learned that if you don’t do what you have to now, later you will be broke and out of a job.”