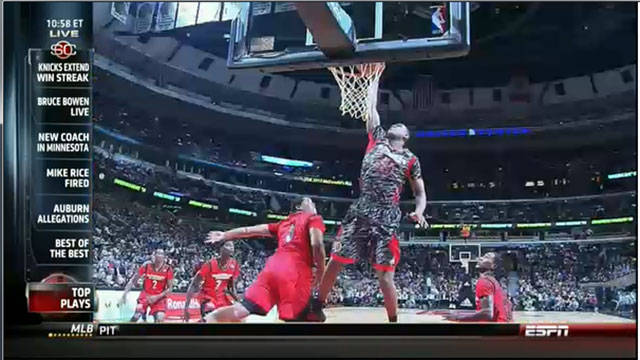 CHICAGO — LSU men’s basketball signee Jarell Martin scored in double figures and had the No. 3 Play of the Day on ESPN SportsCenter Wednesday night in the annual McDonald’s All-American Game at the United Center.

Martin’s play that earned hourly showings on SportsCenter came in the first half on his first field goal of the game. Martin took a pass off a screen on a baseline inbounds play and caught a lob pass for a one-handed slam that drew a big ovation from the large crowd on hand for the annual contest that was nationally-televised on ESPN.

Martin’s West squad won the game by a score of 110-99 as six players, including the local Madison Prep star, posted double figure numbers.

Martin hit 4-of-7 field goals and 2-4 at the free throw line to tally 10 points with three rebounds and one assist.

Martin was drawing some comments from some of the national analysts on hand. Evan Daniels, hoops recruiting analyst for Fox Sports tweeted: “How about Jarell Martin? Aggressive on O. Efficient. Has mid-range J and great scoring touch. Going to be a difference maker for LSU.”

Dave Telep, the senior college basketball recruiting analysis for ESPN tweeted: “Jarell Martin playing as if he’s intent on manning that No. 10 spot in the rankings permanently. LSU has itself a player.”

Reggie Rankin of ESPN.com wrote about @Martin in a preview of all the players in the game:

“Coach Johnny Jones hit the jackpot with this local product. Martin is a long, athletic and skilled big who can make shots and clear the glass, especially offensively; he is a threat to contribute with a timely tip-in. Martin has steadily improved but has yet to scratch the surface of his potential.”

Martin will again showcase his skills in the Kentucky Derby Festival Basketball Classic in Louisville, on April 19. He will be joined in the Derby Classic with fellow LSU signee Jordan Mickey of Prime Prep Academy in Dallas.