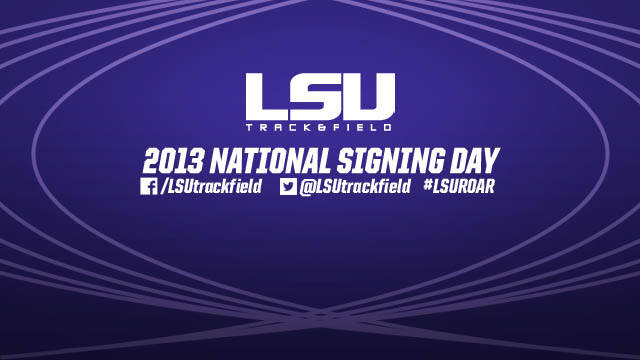 BATON ROUGE – After announcing the signing of six men’s recruits to National Letters of Intent on Tuesday morning, LSU Track & Field officially welcomed the addition of nine future Lady Tigers into the program on Wednesday afternoon as they will help strengthen the women’s squad in each of the event areas beginning in the 2014 season.

The Lady Tigers have continued their pursuit of SEC and NCAA championships in nine seasons under head coach Dennis Shaver, and the Class of 2013 will provide a strong foundation for future success as nine recruits will join the nation’s most decorated women’s program as true freshmen during their rookie campaign in 2014.

That includes three Louisiana natives and six standouts from across the country who will continue their academic and athletic careers at LSU for the next four years.

Friar, Martin, Richardson and Wales have each ranked among the nation’s Top 10 performers regardless of high school classification in their respective events during the 2012 and 2013 seasons.

“We are very pleased with the balance we have with the class of recruits that will be joining our women’s program next season,” Shaver said. “This group will give us a great foundation going forward as we look to be a great track and field team. That’s the expectation each season at LSU. You must be strong in each event area to be in that position, and that’s what this class provides our program.

“We will continue to recruit multi-talented young women with great character to help us finish off the strongest class we’ve signed in our time at LSU. The future is very bright with this group.”

Friar joins the Lady Tigers as a two-time USA Track & Field Junior Olympics champion in the triple jump as one of the nation’s top prep prospects in the event.

A product of Wentzville Holt High School, Friar jumped a wind-legal personal record of 40 feet, 9 ¾ inches to win the young women’s gold medal at the 2012 USATF Junior Olympic National Championships to wrap up an outstanding junior season as the No. 10-ranked triple jump nationally regardless of class and the No. 5-ranked performer in the Class of 2013. That followed a sophomore season in which she won the triple jump crown in the intermediate girl’s division at the 2011 USATF Junior Olympic National Championships while jumping 39-11 ¼ in the final.

Friar was also one of the nation’s leading triple jumpers in limited action during the 2013 indoor season as she posted an indoor PR of 40-4 as the No. 6-ranked senior nationwide this year. She is even a three-time Class 4A state champion in the state of Missouri during her prep career at Wentzville Holt High School.

Martin recently wrapped up the indoor as one of the nation’s top performers in her own right as the No. 2-ranked 55-meter sprinter at the prep level while running a personal best of 6.94 during her senior season.

Martin emerged as one of the top young talents in the United States with a brilliant sophomore season at Martin Luther King, Jr. High School as arguably the top sprinter nationally in the Class of 2013. She was crowned the USATF Junior Olympic 200-meter champion and 100-meter silver medalist in the intermediate division at the 2011 USATF Junior Olympic National Championships.

Two future Lady Tigers have already opened their senior season outdoors in 2013 among the national leaders in their respective events as Richardson and Wales will soon continue their careers at LSU.

Wales has developed into one of the country’s premier javelin prospects during her prep career at West Monroe High School as she is currently the No. 1-ranked thrower in the high school ranks nationally for the 2013 season. She opened her senior season by throwing a personal best of 158-3 at West Monroe’s Van Leigh Relays on March 9, which still stands as the nation’s top mark this spring.

After smashing the Louisiana Class 5A state meet record with a top throw of 152-6 to win the Class 5A state title a year ago, Wales wrapped up her junior season by taking home the silver medal in the javelin final at the USATF Junior Olympics National Championships while earning her first career All-America honor in the event. Wales actually set a seasonal best of 157-2 to defend her District 2-5A crown for a Top 5 national ranking last spring. She ranked No. 5 among all classifications nationally and No. 3 among the Class of 2013 in the javelin throw.

Like Wales, Richardson is off to a fast start to her senior season outdoors as the top hurdle prospect in the state of Louisiana and one of the premier prospects in the United States in the Class of 2013.

A three-time Class 3A and Class 4A state champion during her prep career at Helen Cox High School, Richardson opened her senior season in 2013 by breaking her personal record by nearly two seconds in capturing the 300-meter hurdles in 42.73 at the Sugar Bowl Track Classic held at Tad Gormley Stadium in New Orleans. That performance currently ranks Richardson as the nation’s No. 6-ranked 300-meter hurdler among all classes in the high school ranks and the No. 4-ranked performer among her senior class.

Joining Martin to strengthen LSU’s sprint squad in 2014 are three talented athletes from the state of Texas as Brown, Harvey and Jones have signed their National Letters of Intent to join the Lady Tigers.

Brown has earned international experience as a member of Team USA as a finalist in the 200-meter dash at the 2011 IAAF World Youth Championships held in Lille, France. That’s where Brown sprinted to a wind-legal personal best of 23.80 in the semifinal round before claiming an eighth-place finish in the World Youth final featuring the premier 200-meter sprinters worldwide under the age of 17.

Harvey looks to follow a breakout indoor season in 2013 with a strong season outdoors during her senior campaign at Fort Bend Bush High School. She wrapped up her senior season indoors by sprinting to a new PR for the 60-meter dash at 7.49 in a seventh-place finish at the Brooks PR Invitational, which ranked No. 11 among all classifications and No. 9 among high school seniors nationally for 2013.

Jones also captured a Texas Class 5A bronze medal with her performance at the state meet in 2012 as she raced to a lifetime PR of 54.53 in a third-place finish in the 400-meter dash running for Rowlett High School.

By signing Avery to a National Letter of Intent, the Lady Tigers will welcome one of the top middle distance prospects in the state of Florida as she claimed the Class 3A bronze medal in the 800-meter final at the Florida Class 3A Outdoor State Championships with a run of 2:15.09. She owns a lifetime PR of 2:14.94 in the event that was set at the 2012 Golden South Classic held in Orlando.

Like Wales, Brasuell is one of the leading javelin prospects in the state of Louisiana for the Class of 2013 as she signed with Lady Tigers with a personal best of 137-7 in the event. Brasuell actually finished in second place to Wales at the Louisiana Class 5A Outdoor State Championships a year ago while throwing her PR of 137-7 in the state final en route to the silver medal.

“We’re very excited about the potential of this class that will be joining our women’s team next season,” Shaver said. “We will be counting on this group to make an immediate impact for our program following the loss of a strong senior class like we have this season. We believe this is actually one of the deepest classes we’ve signed in the impact it will make across all of the event areas.

“We look forward to the opportunity to recruit the very best athletes in the United States and around the world as we welcome the next generation of Lady Tigers that will help us win a national championship.”