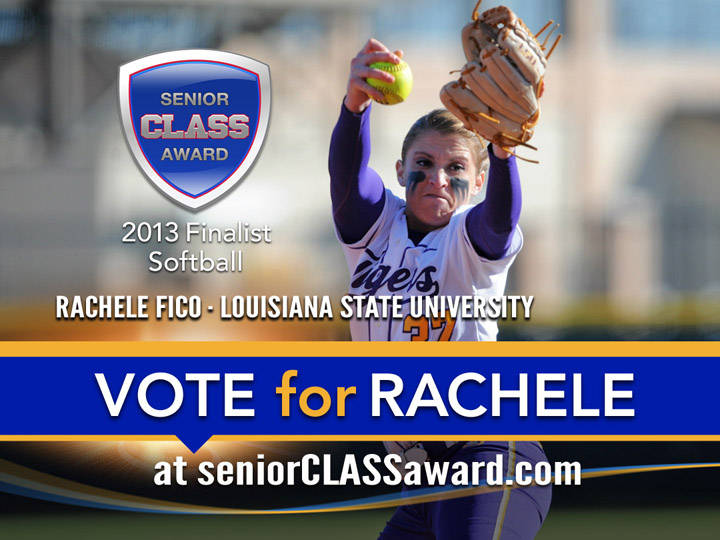 OVERLAND PARK, Ks. – LSU pitcher Rachele Fico was selected as one of 10 finalists from across the country for the prestigious 2013 Senior CLASS Award announced Wednesday.

An acronym for Celebrating Loyalty and Achievement for Staying in School, the Senior CLASS Award honors the attributes of senior student-athletes in four areas: community, classroom, character and competition.

The award program is designed exclusively for college seniors who are utilizing their complete athletic eligibility, remaining committed to their university and pursuing the many rewards a senior season can bring. Premier Sports Management owns and manages the award.

Earlier this week, Fico was chosen as the No. 1 overall pick by the Akron Racers in the 2013 National Pro Fastpitch College Senior Draft. She has come away with a 71-35 record, a 1.57 ERA and 32 shutouts over her three-plus seasons with the Tigers.

Fico was a 2012 NFCA All-America First-Team honoree and is also currently a finalist for the 2013 USA Softball Player of the Year. She has racked up 733 strikeouts, fourth-most in program history.

Fico is a two-time member of the SEC’s Academic Honor Roll and was selected as one of three team captains for the 2013 season. She is majoring in sports administration with a commerce concentration and is scheduled to graduate in May 2014.

The 10 finalists were chosen by a media committee from the list of 30 candidates that were announced in February. Nationwide fan voting begins immediately to help select the winner.

Fans are encouraged to vote at www.SeniorClassAward.com or on the award’s Facebook page at www.Facebook.com/seniorclassaward through May 13. Fan votes will be combined with media and Division I head coaches’ votes to determine the winner.

The Senior CLASS Award winner will be announced during the 2013 NCAA Women’s College World Series held in Oklahoma City May 30 through June 5.