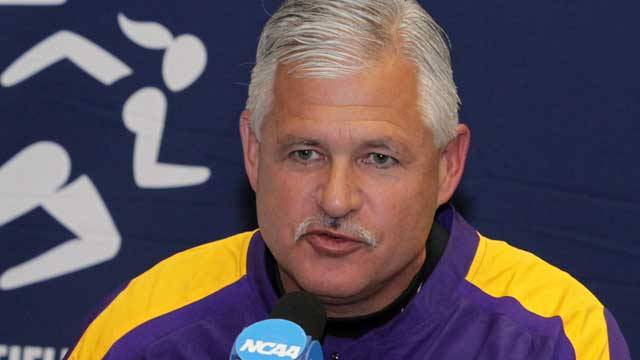 BATON ROUGE – LSU’s eighth-year head coach Dennis Shaver has been recognized for guiding the No. 1-ranked Lady Tigers to the program’s 32nd national championship as the NCAA Division I Women’s Outdoor National Coach of the Year by the U.S. Track & Field and Cross Country Coaches Association.

The Lady Tigers are just five days removed from winning the 32nd national championship in the history of the LSU Track & Field program as they had 76 points in four days of action at the 2012 NCAA Division I Outdoor Track & Field Championships held at Drake Stadium in Des Moines, Iowa.

The Lady Tigers have now claimed 26 national championships all-time with 15 NCAA Outdoor titles and 11 NCAA Indoor titles in their history. The Tigers have won six national titles of their own.

This marks the second time in eight seasons as head coach of the LSU Track & Field program that Shaver has been honored as the NCAA Division I Women’s Outdoor National Coach of the Year. He also earned the honor in 2008 when guiding the Lady Tigers to their last NCAA crown.

Shaver, who serves as LSU’s primary sprints and hurdles coach, coached the Lady Tigers to three NCAA event titles and 15 All-America honors with their performance at the NCAA Outdoor Championships. His group accounted for 68 of the team’s 76 points en route to claiming the national crown.

Junior sprinter Kimberlyn Duncan led the way as the team’s leading scorer with 20.5 points as the NCAA champion in the 200-meter dash, the NCAA silver medalist in the 100-meter dash and anchoring the Lady Tigers to the national title in the 4×100-meter relay. She also broke her own low-altitude collegiate record in the 200 meters while running a personal best of 22.19 seconds in the national semifinal.

Alexander finished as the national runner-up in the 400-meter dash last weekend as she raced to a new PR of 51.20 in the final while claiming the NCAA silver medal and scoring eight points for the team.

Alexander also ran the second-fastest split in the history of the NCAA Championships with a 49.5-second split on the second leg to help lead the Lady Tigers to a national runner-up finish in the 4×400 relay. They also ran with a team featuring junior Latoya McDermott, senior Cassandra Tate and senior Jonique Day to set a new school record of 3 minutes, 24.59 seconds in Saturday’s final.

Shaver also coached Tate to the NCAA title in the 400-meter hurdles as she established a personal record of 55.22 in the final for the No. 15-ranked time in the world this season. Tate was the fourth Lady Tiger in program history to be crowned NCAA champion in the 400 hurdles. She joined the likes of such greats as Schowonda Williams, Debbie Parris-Thymes and Nickiesha Wilson as national champions.

The awards continue to roll in for Shaver in 2012 as he was recognized before the NCAA Championships as the USTFCCCA Women’s South Central Region Head Coach of the Year.