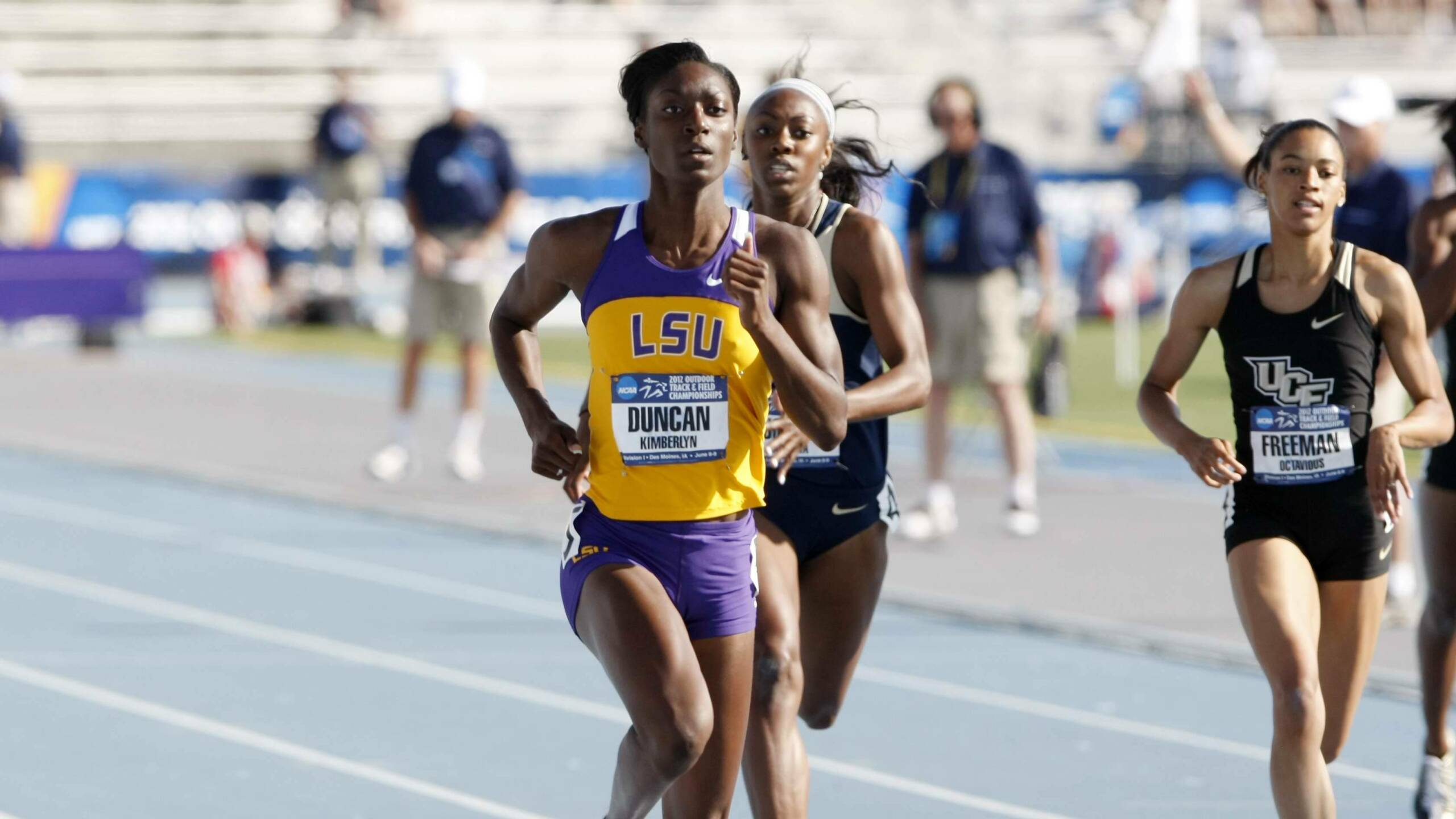 BATON ROUGE – After leading the No. 1-ranked Lady Tigers to the 32nd national championship in the history of the LSU Track & Field program, junior sprinter Kimberlyn Duncan was honored Wednesday as the recipient of two major national awards as the NCAA’s premier track and field athlete.

Duncan has been honored as this year’s recipient of both the Honda Sports Award for collegiate track and field by the Collegiate Women’s Sports Awards and the NCAA Division I National Women’s Track Athlete of the Year award by the U.S. Track & Field and Cross Country Coaches Association.

The reigning SEC Women’s Outdoor Track Athlete of the Year is also the leading contender to take home The Bowerman later this year, which is track and field’s equivalent to the Heisman Trophy.

Duncan’s selection comes within days of leading the Lady Tigers to the 2012 national championship with her performance at the NCAA Division I Outdoor Track & Field Championships in Des Moines, Iowa.

Duncan is the third Lady Tiger track and field star to take home the Honda Sports Award as D’Andre Hill (1995-96) and Keisha Spencer (1999-2000) were honored during their senior seasons with the program. LSU also features two other winners of the Honda Sports Award with Seimone Augustus for the women’s basketball program in 2004-05 and 2005-06 and Susan Jackson for gymnastics in 2009-10.

As the winner of this year’s Honda Sports Award for women’s track and field, Duncan will be considered for the Honda-Broderick Cup presented annually to the Collegiate Woman Athlete of the Year. This is the 36th year in which the Collegiate Women Sports Awards honors the top female athlete in 15 college sports with one of the elite individual honors in all of NCAA athletics.

Duncan is the first Lady Tiger to be honored as the NCAA Division I National Women’s Track Athlete of the Year by the USTFCCCA since its inaugural announcement after the 2006 season.

The Katy, Texas, native was the top scoring athlete of the NCAA Championships for the second season in a row with 20.5 points for her performance in defending her NCAA crown in the 200-meter dash, running the anchor leg for LSU’s NCAA champion 4×100-meter relay team and capturing the NCAA silver medal in the 100-meter dash in the national final for the second year in a row.

That helped propel the LSU women to a dominating 76-62 victory over the Oregon Ducks in the women’s team standings to win their first NCAA Outdoor team title since the 2008 season.

“I’m certainly honored that I would even be considered for these kinds of awards,” Duncan said following her selection as the winner of each award. “This has been an amazing season for our team as our total focus has been on winning a national championship. I’m proud of everyone on this team in how we really stepped it up to achieve that goal last week at Drake (University). That’s what our program is most known for, and we’re proud to continue the tradition of winning national championships at LSU.”

It has been a record-breaking junior season for Duncan as she twice broke her own low-altitude collegiate record in the 200-meter dash as one of the world’s leading sprinters.

After setting a wind-legal personal record of 22.22 seconds in the national quarterfinals held at the NCAA East Preliminary Rounds in Jacksonville, Fla., on May 26, Duncan eclipsed her own record for the second time in as many races with a wind-legal 22.19 clocking in the national semifinal en route to defending her NCAA 200-meter crown on Saturday afternoon at Drake Stadium in Des Moines.

Her personal-record time of 22.19 stands No. 2 on the NCAA’s all-time list as it trails only the recognized collegiate record of 22.04 set at altitude by LSU great Dawn Sowell at the 1989 NCAA Championships in Provo, Utah, on the campus of Brigham Young University.

Duncan’s time of 22.19 also ranks her No. 2 on the world list for the 2012 outdoor season. She also set an indoor PR of 22.74 for the world’s fastest run indoors while defending her NCAA Indoor crown.

Duncan has made history as the first collegiate sprinter to sweep NCAA Indoor and NCAA Outdoor titles in the 200-meter dash in back-to-back seasons with her performance in 2011 and 2012. She’s also the first Lady Tiger to win back-to-back NCAA Outdoor gold medals in the event in team history.

She also extended one of the more impressive streaks in collegiate history with her 18th-straight victory in 200-meter finals against collegiate competition dating back to the Tyson Invitational indoors in 2011.

Not to be overshadowed is Duncan’s performance in anchoring the Lady Tigers to a national crown in the 4×100-meter relay and finishing as the NCAA silver medalist in the 100-meter dash for the second year in a row. She anchoring the Lady Tigers to a winning time of 42.75 in the sprint relay final, while she posted a time of 11.16 into a strong headwind of 1.7 meters per second for second in the 100-meter final.

Duncan teamed with Takeia Pinckney, Semoy Hackett and Rebecca Alexander for a seasonal-best time of 42.68 in the national semifinal for the ninth-fastest time in collegiate history.

Duncan propelled herself to a dominant postseason with a record-setting performance at the SEC Outdoor Championships as she shattered the meet record with a wind-legal PR of 10.96 to take home her first ever SEC title in the 100-meter dash. Her time not only broke the previous meet record of 11.03 set in 2006 by Olympic silver medalist Kerron Stewart of Auburn, but also shattered her own personal record and Bernie Moore Track Stadium record of 11.07 set earlier in the 2012 season.