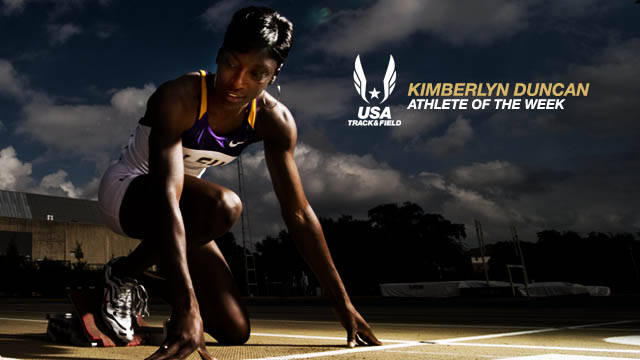 BATON ROUGE – Lady Tiger sprinter and Bowerman Award favorite Kimberlyn Duncan continues to be recognized for her record-setting and world-leading performance last weekend as she has been selected the USA Track & Field Athlete of the Week while preparing for her run at a national championship.

Duncan is the fifth athlete with LSU Track & Field ties to be named the USATF Athlete of the Week with a total of eight selections by the Tigers and Lady Tigers since the 2005 season.

Now in its 11th year, USATF’s Athlete of the Week program is designed to recognize outstanding performers at all levels of the sport. USATF names a new honoree each week and features the athlete on www.usatf.org. Selections are based on top performances and results from the previous week.

Duncan catapulted herself to the top of the 2012 world list in the 200-meter dash while shattering her own low-altitude collegiate record as she sprinted to the finish line in 22.22 seconds in Saturday’s quarterfinals at the NCAA East Preliminary Rounds held at Hodges Stadium in Jacksonville, Fla.

While running with only the slightest of tailwinds at 0.1 meters per second, Duncan also became the 2012 world leader in the 200-meter dash, surpassing the previous world-leading 22.31 (+1.5) by Carmelita Jeter at the Rafer Johnson/Jackie Joyner-Kersee Invitational in Westwood, Calif., on April 14.

Duncan has been a revelation as one of the world’s leading 100-meter sprinters this spring as her personal record and SEC Championships meet record of 10.96 ranks No. 5 on the world list for 2012. She has even run a wind-aided 10.94 in the event this spring as an NCAA title favorite.

Both the semifinal and final rounds of the 2012 NCAA Division I Outdoor Track & Field Championships will run June 6-9 at Drake Stadium on the campus of Drake University in Des Moines, Iowa.

Duncan is the first LSU Track & Field athlete to be selected as the USATF Athlete of the Week while still a member of the program since former Tiger national champion Xavier Carter on June 14, 2006, in the wake of his historic performance at the 2006 NCAA Outdoor Championships in Sacramento, Calif. There he became the first collegiate athlete since Ohio State’s Jesse Owens in 1935 and 1936 to win four NCAA gold medals with his wins in the 100 meters, 400 meters, 4×100 relay and 4×400 relay.

Former LSU standout Walter Henning claimed three USATF Athlete of the Week honors before he joined the program as a sophomore in 2009. Tiger great Walter Davis earned two awards during the 2005 and 2006 seasons, while former Lady Tiger standout Lolo Jones was honored during the 2008 season.