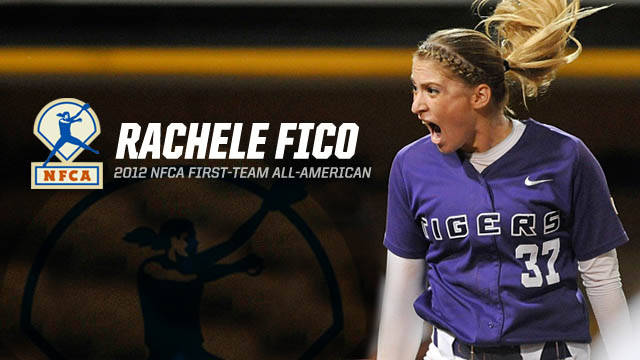 STARKVILLE, Miss. – LSU junior pitcher Rachele Fico was selected among the nation’s elite and became the sixth player in program history to come away with Louisville Slugger/NFCA All-America First-Team accolades Wednesday as announced by the National Fastpitch Coaches Association.

“It’s an honor to have Rachele be a part of this elite group of quality softball players,” head coach Beth Torina said. “She’s very deserving and has worked extremely hard to get to this point in her career. Rachele is the backbone of our team and is a huge reason why our program has made it to the Women’s College World Series. As a coach, I’m truly blessed to come to work every day and work with a pitcher like her.”

Fico has garnered a 20-11 record to go along with the nation’s best ERA at 0.92. Her 13 shutouts also were tied for fifth nationally. In those 11 setbacks, Fico has received only seven total runs of support. The junior right-hander has limited opponents to a .177 hitting clip and notched 213 strikeouts to rank third and fourth, respectively, in those catego¬ries among the SEC leaders.

Fico has won all four of her NCAA postseason appearances as LSU has qualified for the program’s first Women’s College World Series since the 2004 season and third overall. She fired consecutive two-hitters versus Texas State and No. 8 national seed Texas A&M to claim the NCAA College Station Most Valuable Player.

Fico followed that up with a pair of stellar efforts en route to two victories over No. 9 national seed Missouri, highlighted by a one run, two hit performance in the rubber game of NCAA Columbia Super Regional.

During the regular season, Fico became the seventh hurler in program history to reach the 50-win plateau. The six-time Louisiana Pitcher of the Week reached that feat with a four-hit gem versus No. 12 Georgia in the regular season home finale.

LSU meets No. 1 national seed California Thursday at 2:30 p.m. to open WCWS action. The game is televised on ESPN2/ESPN3.com with Pam Ward, Michele Smith and Holly Rowe serving as the broadcast team.

Fans can follow every pitch of LSU softball this season via live in-game updates on LSU softball’s social media outlets at www.Facebook.com/lsusoftball and @LSU_Softball on Twitter.