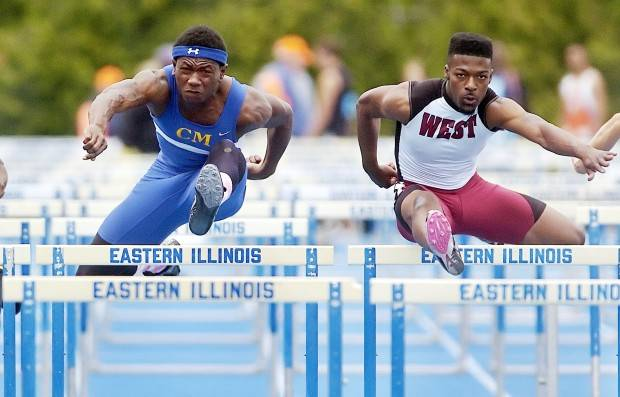 CHARLESTON, Ill. – Future LSU Tiger hurdler Rashad Hulbert wrapped up his prep career at Crete-Monee High School on the weekend by defending his Illinois Class 3A state title in the 300-meter hurdles while cracking the Top 10 of the national rankings for the 2012 outdoor season with his personal record.

Hulbert nearly made a clean sweep of hurdle titles as he also won the Class 3A silver medal with the 110-meter hurdles at the 2012 Illinois High School Association Boys State Championship on Saturday.

Hulbert first stepped onto the track for the final of the 110 hurdles for what proved to be the most exciting race of the afternoon. He battled Rock Island High School junior Derrick Willies to the finish line, as each raced to a wind-aided time of 14.02 seconds in a photo finish. Hulbert won the silver medal by only a few thousandths of a second as Willies was announced as the state champion.

But Hulbert avenged his defeat in the final of the 300-meter hurdles when he raced to the finish line in his personal-best time of 36.91 to finish more than eighth tenths of a second ahead of Willies (37.75). Hulbert defended the Class 3A state crown he won as a junior in 2011 with a winning time of 37.60.

That performance catapulted Hulbert into the Top 10 of the national rankings as the No. 10-ranked runner in the 300 hurdles among all classifications and No. 8-ranked performer in the Class of 2012.

“This shows me just how far good work ethic will take me,” Hulbert said. “Hard work and dedication will bring success. It all starts in the classroom. I won’t go far at all without good grades. I also wake up every morning and go to the track to work hard. I’ve had a good year because I listen to my coach and just work hard every day. This shows me just how much my hard work has paid off and how much I can improve in going to LSU. I’m really excited about joining the team and continuing to work hard when I get there.”

But before Hulbert arrives in Baton Rouge, he will go compete in the USA Track & Field National Junior Olympic Championships being held July 23-29 at Morgan State University in Baltimore, Md. He won the USATF Junior Olympics silver medal in the 400-meter hurdles in 2011.