Blogging from the Berm: Juliana Santos 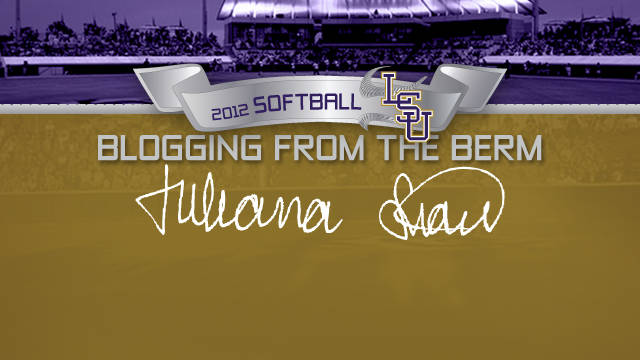 OKLAHOMA CITY, Okla. – Juliana Santos provides the latest installment of LSU softball’s “Blogging from the Berm” as the Tigers look back on the clinching a spot in this week’s Women’s College World Series.

LSU meets No. 1 national seed California Thursday at 2:30 p.m. to open WCWS action. It marks the Tigers first WCWS appearance since the 2004 season. The game is televised on ESPN2/ESPN3.com with Pam Ward, Michele Smith and Holly Rowe serving as the broadcast team.

We did it! After four years at LSU, all of the hard work, dedication, and relentless effort have finally paid off. We are very excited to be going to the Women’s College World Series. Words cannot even begin to describe what it was like out on that field yesterday.

Coming into the super regionals we knew that it was going to be a FIGHT, but we were ready. We knew that we were well prepared. Taking that first game was HUGE for us. Honestly, I think that the dugout deserves most of the credit for the first win. We were our loud, crazy and were able to shake the opposing pitcher up. Our dugout really threw her off her game, there was no doubt that we were in her dome.

Once we established ourselves and our presence in the first game, we capitalized and took care of business. As always, Rachele Fico did her thing on the mound, and we came out victorious. The feeling of that first win was exhilarating, but nothing like the overwhelming feeling we had the next day when we won the series in a deciding third game.

Sunday was intense. We knew that Missouri’s ace Chelsea Thomas was going to come out better and stronger. I think we all would agree that she did just that. This was the point where we showed our heart and fight. We never gave in. After 12 innings of wearing her down, we knew that the final game was ours.

To be honest, Brittany Mack‘s 17-strikeout performance was absolutely clutch. She matched Thomas pitch-for-pitch. Extending Thomas in the first game meant that she would tire out during the second game. There was never a doubt in our minds that we were not making this trip to the Women’s College World Series. It feels so great just to say that phrase. After Lang caught that final out, we went nuts. The feeling and emotion is indescribable.  It’s an accumulation of sweat, pain, tears, hard work, dedication and triumph.

We have had IT during these first two weekends of postseason. You better believe we’re keeping IT.  Not only did we have IT, but our fans had IT as well. No double our fans were heavily outnumbered, but let me tell something, the entire State of Missouri knew that LSU was there. You all were unbelievable. I will never forget the passion and pride that our fans exuded in the stands this past weekend. They put IT all on the line, and we appreciate all of them so much.

Tiger Nation, we truly appreciate this opportunity we have all been blessed with. We are truly the lucky ones. We are so humbled to play and represent such a prestigious university. We certainly recognize that IT is an honor and a privilege to wear the purple and gold.

I hope to find a sea of purple greeting us at ASA Hall of Fame Stadium on Thursday afternoon. Now, let’s geaux win IT all, whatever IT takes. We’re going to the ship, whaaaatttt?