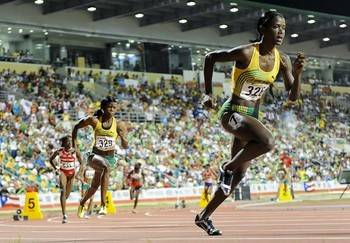 She was a catalyst in the Bison scoring 101.5 points in three days en route to a national championship win on Saturday as they finished 20.5 points clear of the 81 points by runner-up Concordia University.

“My teammates and I worked really hard throughout the season because we wanted to make history so we did it,” Tracey said. “Everyone did what they were expected to do. That’s why we won it in the end. It’s a great experience. It’s been a good two years for me at OBU, and it ended well. Now, I’m looking forward to joining the LSU family and helping our team win a national championship.”

After winning the NAIA title in the 400-meter hurdles as a freshman with a run of 58.11 in the event final last spring, Tracey raced to a 2012 seasonal best of 57.33 on Saturday afternoon to defend her crown in an exciting race to the finish line. She took control of the race through the 200-meter mark and cruised to the finish line ahead of Embry-Riddle’s Crystal Bardge (57.91) and Indiana Tech’s Zalika Dixon (57.93).

Tracey eclipsed her previous seasonal best of 57.89 set in a third-place finish at the Drake Relays on April 28, and marked her fastest 400-meter hurdles performance in her two seasons with the Bison.

A native of Clarendon, Jamaica, Tracey signed with the Lady Tigers in February with a personal record of 56.89 as a 19-year-old in winning the bronze medal in the 400-meter hurdles at the 2010 North American, Central American and Caribbean Under-23 Athletics Championships.

“Winning the hurdles was great. I wanted to finish my NAIA career as a national champion,” Tracey said. “I had a good race. I didn’t PR like I wanted, but I still ran a season’s best and am happy with that. I had a great start and passed everyone by the 200-meter mark. I wasn’t thinking about anyone in the race, only to cross the finish line first. I did that and scored some really good points for my team.”

She teamed with sophomore Stacey Warrior, junior Jura Levy and senior Verone Chambers in earning the 4×400-meter relay title in Saturday’s finale in a school-record time of 3 minutes, 35.46 seconds. The team finished nearly seven seconds ahead of the 3:42.20 run by Shorter University.

Tracey also led off a squad featuring freshman Halie Herbert, senior Shondia Drew and freshman Hannah Helker that took home the 4×800-meter relay crown on Friday with its winning time of 8:52.49. The team finished nearly six seconds ahead of the 8:58.26 by the University of British Columbia.

With her two-year NAIA career now in the books, Tracey is set to transfer to LSU for summer school and will continue her training as she prepares to run the 400-meter hurdles at the Jamaican National Olympics Trials beginning June 24 at the National Stadium in Kingston. She is currently the No. 7-ranked Jamaican performer in the women’s 400 hurdles for the 2012 outdoor season.