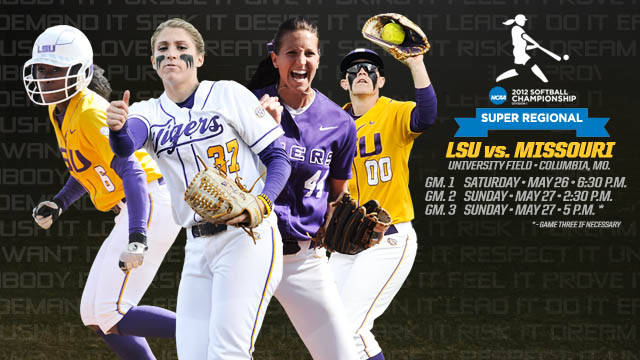 COLUMBIA, Mo. – The LSU softball team will appear in the program’s first super regional since 2007 when the Tigers meet a second-straight future SEC rival and No. 9 national seed Missouri as part of a best of three-game series held Saturday and Sunday at University Field.

Game times are slated 6:30 p.m. [Saturday] along with 2:30 p.m. and 5 p.m. [Sunday] with the winner securing one of eight spots for next week’s Women’s College World Series in Oklahoma City. All three games of the NCAA Columbia Super Regional are televised on ESPNU and ESPN3.com with Cara Capuano and Garland Cooper serving as the broadcast team.

LSU (37-22) picked up 1-0 victory over Texas State followed by 2-0 and 2-1 triumphs over No. 8 national seed Texas A&M to capture the NCAA College Station Regional championship.

“We are really excited to be one of the 16 teams still playing softball,” head coach Beth Torina said. “It is a big honor and big accomplishment for our team. We have our work cut out for us without question. Missouri has been in this situation a lot more than we have. They are experienced and have some talented players. There’s no doubt that we will be as prepared as we can, and we will be ready to go on Saturday night.”

Missouri (46-12) has garnered three consecutive Women’s College World Series trips. The Tigers have pieced together seven straight victories and swept through its regional with 6-0 and 2-1 wins over Illinois State sandwiched between a 1-0 nine-inning victory versus DePaul.

Chelsea Thomas has compiled a 26-7 record and a stifling 1.00 ERA in the circle. The junior right-hander has racked up 290 strikeouts, second-highest for a single-season in Mizzou history. She has notched 12 shutouts and limited her opponents to a .159 batting average.

The Missouri offense is fueled by Ashley Fleming, who has secured a .377 batting average in addition to 16 home runs and 51 RBIs. Kelsea Roth and Nicole Hudson also has chipped in seven homers apiece to go along with 39 and 36 RBIs, respectively.

The Fico-Mack duo held the opposition to one run on seven hits, a paltry .101 hitting clip and racked up 19 strikeouts. Both are NFCA All-South Region selections, totaled a combined 380 strikeouts and tallied 33 of LSU’s 37 wins on the season.

Fico has put together an 18-11 mark with a blistering 0.92 ERA, which is the second-lowest ratio in the nation. She fired consecutive two-hit shutouts over Texas State and Texas A&M to keep LSU in the winner’s bracket en route to the regional’s unanimous MVP selection.

Mack picked up right where Fico left off and punched LSU’s ticket to the super regional. She navigated her way through six scoreless frames and limited the high-octane Aggies to three hits. The senior right-hander is 15-11 for the season with a 2.38 ERA.

Falcon paced LSU’s offense with a .375 batting average and provided a RBI single to put LSU on the scoreboard during Saturday’s winner’s bracket tilt with Texas A&M. She also scored the game’s first run after reaching on an error in the fourth inning of Sunday’s regional final.

Heyward returned to the starting lineup for the first time since April 17 during LSU’s NCAA postseason opener versus Texas State. She provided the spark with a leadoff single and came around to score on Juliana Santos‘ walk-off RBI single.

“We definitely played LSU softball last weekend,” Torina said. “We pitched really well and played defense, which is what we have prided ourselves in all season long. We also came up with some big hits. I thought the offense swung really well. They were able to scratch and claw out some runs for us. We did a great job of scoring when we needed it.”

Ashley Langoni posted hits in two of LSU’s three regional contests and has hit safely during five of her last nine outings. For the season, Langoni is the Tigers triple-crown leader with a .270 batting average, six home runs and 29 RBIs. The senior left fielder also ranks among the program’s top 10 in homers and RBIs.

Ashley Applegate has reached base in six of her last eight outings highlighted by a 2-for-3 effort against Texas A&M during Sunday’s regional championship.

In her lone plate appearance at the NCAA College Station Regional, Kailey McCasland lifted a sacrifice fly to break a 0-0 tie in the fourth inning in Sunday’s regional final.

“I do think that is important this time of year, knowing your role and really excelling in your role,” Torina said. “When you are called on to do a job, you get the job done. That is exactly what Kalley McCasland did, that is what Simone Heyward did. Having Simone and A.J. Andrews at the top of the lineup is something that we’ve wanted all season. It’s nice that it’s happening right now.”