BATON ROUGE – LSU fans have a chance to experience one of the unique periods in the school’s illustrious athletics heritage as the Olympic medals of the great Glenn “Slats” Hardin are on display at the Jack & Priscilla Andonie Museum adjacent to the Lod Cook Alumni Center on campus.

Hardin remains the most accomplished Olympian in the history of the famed LSU Track & Field program as the 1932 silver medalist and 1936 gold medalist in the 400-meter hurdles.

After winning a silver medal in the 400-meter hurdles at the 1932 Olympic Games in Los Angeles, Calif., Hardin won the gold at the infamous 1936 Olympic Games in Berlin, Germany. He remains the only LSU Track & Field athlete to win an Olympic gold medal in an individual event. 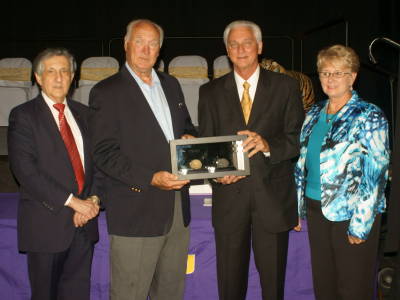 The LSU Track & Field program celebrates Hardin’s legacy each year with the presentation for the Glenn “Slats” Hardin Award named in honor of the greatest athlete to wear the purple and gold. It is presented to LSU’s Most Outstanding Male Performer of the Year as part of its team banquet each spring.

Hardin was a four-time NCAA champion and six-time All-American during his brilliant collegiate career at LSU from 1933-35. Hardin was a member of LSU’s first national championship team in 1933 where he captured individual NCAA titles in the 440-yard dash and 220-yard low hurdles.

The Jack & Priscilla Andonie Museum is open Monday through Friday from 8:30 a.m.-4:30 p.m. CT, and is located at 3828 West Lakeshore Drive adjacent to the Lod Cook Alumni Center on the LSU campus.