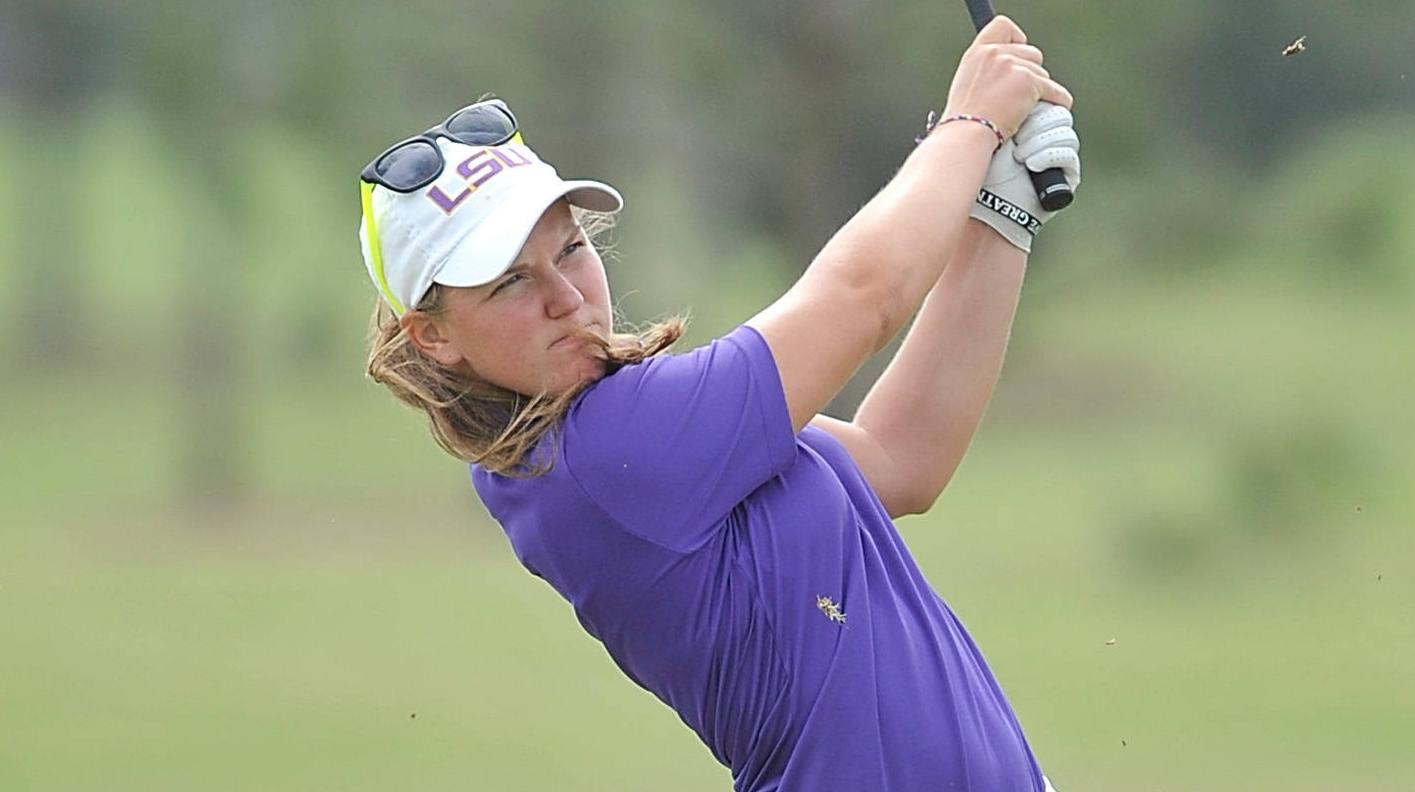 FRANKLIN, Tenn.  – The sixth-ranked Lady Tigers played nine holes on Tuesday to complete their preparations for the 2012 NCAA D1 Women’s Golf Championship which begins on Wednesday morning at the Vanderbilt Legends Club just outside Nashville.

Last year in the Championships at Bryan, Texas, LSU freshman Austin Ernst became the first freshman since 1998 to capture the individual title with a four-round total of 7-under par 281 after posting 6-under rounds of 66 in the second and fourth rounds. Ernst used a hole-in-one on the second hole and a long birdie putt on the third to propel her to the lead.

LSU as a team was also near the top of its game, finishing in third place in the event, just eight strokes behind winner UCLA, the best finish for the Lady Tigers in their 11 previous appearances.

For the second straight year, the Lady Tigers did outstanding in the regional, advancing to the NCAA Championships for the fourth time in five years. After finishing second to UCLA in the Central Regionals in 2011, this time LSU and UCLA tied for the title in 2012 in the West Regional in Erie, Colo.

UCLA and LSU were 1-2 this year in tournament wins among the top 25 teams in the Golfstat performance charts with UCLA winning seven events and LSU four. It was the second best season for the Lady Tigers in terms of team wins, topped only by the 1985-86 team which captured five team titles.

It’s all about peaking at the right time,” said Bahnsen, in her 28th year at LSU. “I feel like we are in a good place. It’s a really, really good championship layout and a good test.”

LSU went through a full practice round on Sunday and played the front nine on Monday and Bahnsen declared her team ready to go in the longest test of women’s college golf.

“They were very businesslike (Sunday), took some great notes and got a great feel for the course,” she said. “(Monday) they were business like but more relaxed which is what you want to have. We just played nine. We came out early and practiced before we played in case some bad weather moved in. They are just ready to get this show on the road. It’s a long week and you just want to keep yourself emotionally and mentally on an even keel.”

Ernst also was showing her old form, finishing in second at 6-under 210 and freshman Madeline Sagstrom continued her consistently strong season with a plus-1 217, tying for eighth.

In all, seven teams from the 11 from the Southeastern Conference that advanced to regional play got through as one of the 24-team field.

Ernst will play in the No. 1 spot for LSU when the final wave of the first day goes off at 12:55 off the first hole. The Seneca, S.C., sophomore comes in with a 73.3 stroke average with three career wins and nine career top 10s.

“I think after last week (at the regional) our confidence is about as high as it can get,” Ernst said after finishing her practice. “We were right there last year. I think we have a very good chance. I’ve always been good with my irons so I feel that the course sets up well for me. It’s just getting the putter rolling.”

Of her year as champion, Ernst said: “It’s been great. Winning this tournament obviously opened up a lot of doors for me. This win gave me confidence to know that I can play with anybody. I’m been really grateful and really blessed with what I have been able to do this past year.”

Sagstrom, from Sweden, will play second with a 73.4 stroke average and three top 5s in her first year at LSU, while senior Tessa Teachman comes in off one of her best LSU seasons with a 73.8 stroke average. Rounding out the lineup will be Swedish senior Jacqueline Hedwall at 75.6 strokes a round and sophomore transfer Lindsay Gahm who is averaging 76.4 shots a round.

GOLF NOTES: The teams had a unique welcome event Sunday night as following dinner, country music star and avid golfer Vince Gill entertained the golfers and coaches with a 45-minute concert … What will be the low score this year for an LSU player after Megan McChrystal shot 64 in 2011 and Ernst shot two 66s in last year’s competition … Ernst and Teachman have both shot 67 this season, while Sagstrom has a 68 on her sheet for the year … LSU shot seven rounds under par as a team this year, highlighted by the school record 11-under 277 to come from behind in the final round to win the Cougar Classic last September in the opener of the Fall Season.

After the first two rounds in which the pairings remain the same, the pairings for the third and final rounds are based on score. This year, the tee times have been moved up 30 minutes to start at 7:30 a.m. each morning to hopefully avoid what happed last year in Bryan, Texas, when the third round was halted by darkness after a lightening delay, forcing the fourth round to finish in near total darkness.

The weather forecast for the opening round shows a high of 77 for the afternoon with a 30 percent chance of rain in the afternoon when LSU is on the course.

In their annual picks for the championship, Golfweek’s Julie Williams picks LSU to win the team title. “The Tigers show up every week thinking they can win, and tying UCLA for the West Regional title made me look at them a little differently. LSU has won four times this year, and with its very best game for the next four days, has the potential to knock off the favored Bruins. I may be alone in this pick, but then again, how many people pegged LSU’s Austin Ernst to win last year’s individual title.”

There will be live webcast coverage of play on the 9th and 18th holes on the final two days of competition on www.NCAA.com. Live scoring for the event can also be found on NCAA.com. Updates throughout the round from out of the course will be available on Facebook at www.Facebook.com/LSUwomensgolf and on Twitter @LSUWomensGolf and @NCAAWGolf12.