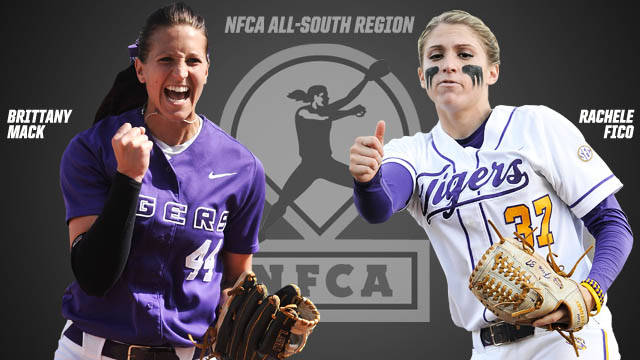 Fico collected a first team selection, while Mack came away with second team honors. It marked the fourth consecutive season that the Tigers have had a pitcher selected to the first team. LSU was one of seven programs to have two pitchers garner NFCA All-Region status.

Fico joined the illustrious list of Lauren Castle along with former NFCA All-Americans Ashlee Ducote, Stephanie Hastings, Kirsten Shortridge and Britni Sneed as the only players in program history to secure two NFCA All-South Region First-Team selections during their careers.

The Fico-Mack duo has totaled 30 of LSU’s 34 victories on the season. They also have racked up a combined 361 strikeouts.  In its 22 setbacks, the pair has received only 20 total runs of support.

“We’re extremely excited to have Rachele and Brittany honored with these awards,” head coach Beth Torina said. “Both pitchers are very deserving and have been key components to our success this season. They have truly worked together, pulled for each other and been a nice compliment to one other. It’s an amazing honor to have one pitcher named all region. It’s a great achievement and testament to Rachele and Brittany’s hard work to have both of them earn this award.”

Fico has amassed a 16-11 record and her 0.98 ERA is second-lowest in the nation. She is one of four hurlers to defeat No. 2 national seed Alabama at Rhoads Stadium. The junior right-hander fired in a season’s best 13 Ks versus No. 10 national seed Georgia on April 27. Her 11 shutouts fueled by a quartet of one-hitters are tied for 10th nationally.

Mack has produced a 14-11 mark to go along with a 2.44 ERA. The 2011 NFCA All-America Third-Team recipient turned in a signature performance with a four-hit shutout and eight strikeouts during a 1-0 triumph over No. 5 national seed Florida on April 24. Five days later, she also provided the game’s only run with her first career hit, a RBI double, in a 1-0 victory against No. 10 national seed Georgia.

Below are the complete NFCA All-South Region teams.