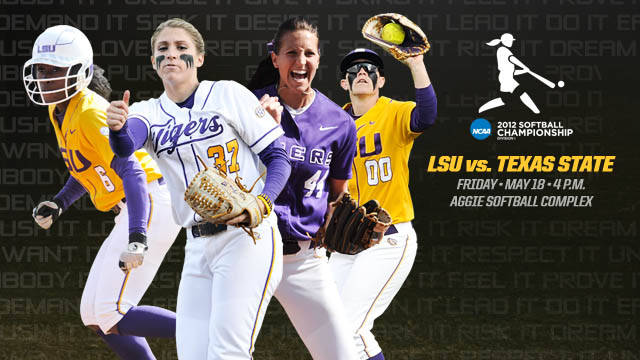 LSU (34-22) garnered an at-large selection into the NCAA Field of 64 and are appearing in its 14th NCAA Tournament. The Tigers have compiled a 38-26 postseason mark highlighted by a pair of trips to the Women’s College World Series during the 2001 and 2004 seasons.

LSU and Texas State open up the double elimination event with a 4 p.m. Friday first pitch. Texas A&M and Bethune-Cookman will follow with a 7 p.m. tilt. All games from the NCAA College Station Regional are televised by ESPN3.com with Cara Capuano and Cheri Kempf serving as the broadcast team.

The Tigers have won all four previous meetings with Texas State, most recently an 8-0 five-inning decision in 2009 where Brittany Mack tossed a no-hitter fueled by eight strikeouts against four walks.

“We are excited to be included in the NCAA field,” head coach Beth Torina said. “It is a big honor to be included in the 64 teams that are able to continue to compete this week. We are excited to go to Texas A&M, I know they host a great event. Our goal is to go out and play LSU softball the same way we have played it all year long. We have had some huge successes throughout this year”

Chandler Hall, the Southland Conference Pitcher and Player of the Year, racked up a 22-6 mark and a 1.57 ERA in the circle. She registered 208 strikeouts over her 182.2 innings of work. Offensively, Hall tallied a .275 batting average to go along a team-leading three home runs and 24 RBIs.

Hall is joined by Anne Marie Taylor’s 16-8 record and 1.64 ERA. The southpaw has chipped in 155 Ks during her 171.0 frames of action. Both Hall and Taylor have held their opponents to under a .200 hitting clip for the season.

Anna Hernandez paces Texas State’s offense with a .309 average in addition to three dingers and 21 RBIs, while Selena Hernandez has driven a team-high 26 RBIs on a team-best 50 hits.

“Texas State is going to be tough,” Torina said. “I know Chandler Hall just threw a no-hitter in the championship game of the Southland Conference Tournament. We are definitely going to have to be prepared to play our best softball right out of the gate, and we know we have our work cut out for us.”

LSU has won 30 of 34 games when scoring first, and the Tigers also have notched an unblemished 15 victories when denting the scoreboard during the first inning this season.

Ashley Langoni continues to be LSU’s triple-crown leader with a .275 batting average, six home runs and 29 RBIs. She has cranked 39 hits, including a team-leading 10 doubles. The All-SEC Defensive pick also has drawn 42 walks, a program single-season record. For her career, Langoni is ranked among the program’s Top 10 with 29 homers and 110 RBIs.

Allison Falcon and Juliana Santos are right behind Langoni with 21 and 18 RBIs, respectively. The pair has been a big part of LSU’s defense ability to record an errorless game in 16 of its last 27 contests.

A.J. Andrews has reeled off 24 of her 28 hits, scored 13 of her 16 runs and recorded 12 of her team-high 13 stolen bases going back to March 9. She was an All-SEC Freshman-Team pick after she has served as LSU’s leadoff hitter during 30 of the team’s last 31 games.

Cassie Trosclair and Tammy Wray have stepped up for the Tigers down the stretch. Wray has provided a hit in nine of the last 16 games, while Trosclair has hit safely in five of her seven outings where she has earned an at-bat.

LSU’s pitching tandem of Rachele Fico and Brittany Mack, who recently picked up NFCA All-South Region honors, have combined for 30 of LSU’s 34 wins. The duo has received only 20 runs of support during their 22 losses on the season.

Fico, an All-SEC Second-Team selection, is 16-11 and picked up 11 of her 16 victories via the shutout. Her blistering 0.98 ERA is the second-lowest ratio in the nation. The junior right-hander has limited opponents to a .182 hitting clip and garnered 192 strikeouts to rank fourth and fifth, respectively, in those categories among the SEC leaders.

Mack has collected a 14-11 mark and a 2.44 ERA. Last time out versus No. 7 Florida at the SEC Tournament, Mack carried a no-hit bid two outs into the fifth inning. Her last victory came during an 11-strikeout performance of Ole Miss on April 21.

“Both Fico and Mack are great options, we really can’t go wrong whichever way we decide to go,” Torina said. “The fact that those two pitchers really complement each other and are so different makes us really hard to prepare for.”

Opening Statement
“We’re really excited to be here at Texas A&M. I’ve been here for a regional before, and I know the team was here last year. Texas A&M runs a really quality event, always first-class. We feel like we’re really prepared. We’ve had all week to get ready for these teams, and we know we’ve got our work cut out for us. We’re excited to be here and we feel like we’re prepared.”

On struggling offensively
“I think that it was a little bit expected. Of course as a new coaching staff, we always feel like we’re going to be able to make a big difference. I think we would have hoped to make a bigger difference with this team and this group. I don’t feel like they haven’t bought into things that we’ve asked them to do, because they truly have. I just feel like the gauntlet that we play in the SEC and facing All-Americans day-in and day-out not only affects your success offensively, but your mentality. I think it’s really tough to be confident day-in and day-out when you’re facing the absolute best in the nation every single day.”

On preventing frustration
“I think the month of March was a great month for us. We were on a pretty long win streak there – 12 games. We had a few of our kids with averages above .300 in the month of March, and I really feel like it was there mentality at the time – just going out, competing and having some success. The month of April was definitely frustrating and something that we had to work through. We’ve tried a lot to stay positive about the things that we can be positive about. About people getting timely hits, about moving runners, bunting, hitting behind a runner, things that maybe don’t produce things in an average on a piece of paper, but they increase our chances of scoring. That’s what we’ve talked about with LSU softball is, let’s be selfless. Let’s move our runners. Let’s get people in scoring position and then see if we can make things happen at that point. The goal is to just be selfless and manufacture what we can.”

Opening statement
“Our team has been working really hard at practice. We’ve identified some of our problem areas, and we’ve really gone to work and focused on them. Right now, we just need to make sure we translate that into game play, execute in pressure situations and play Tiger softball.”

On being successful in the circle without a lot of support
“Whenever I step on the mound, I just focus on the pitch at-hand. I take it one pitch, one play at a time. I know that my job is to keep my team in it as long as possible. I need to be strong, I need to be solid on the mound and give my team a chance to score runs. I know if I put forth my best performance, they’re going to come through and produce offensively for me. So I just stay focused. I have so much faith in my team. I trust in them so much, and I know they’re very capable of getting the job done. I just need to do my best every time I step on the mound to keep them in it.”