Blogging from the Berm: Heidi Pizer 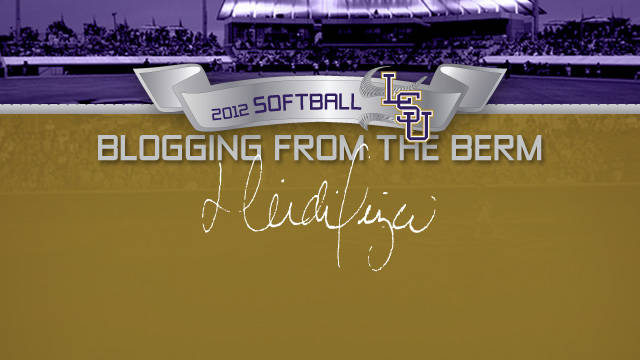 COLLEGE STATION, Texas – LSU softball’s “Blogging from the Berm” continues its question and answer theme from last week during the Wednesday bus ride to Texas A&M for the NCAA College Station Regional.

This time, Heidi Pizer takes questions from her teammates which range from the origin of the rally phone to her favorite class at LSU.

LSU faces off with Texas State, the Southland Conference champion, Friday at 4 p.m. to open the NCAA College Station Regional. Live video is available on ESPN3.com with Cara Capuano and Cheri Kempf serving as the broadcast team.

Ring Ring it’s me, Heidi Pizer. It has come to my attention that a certain occurrence involving a certain phone, has caused a bit of a ruckus in the softball world. Both a hit on Twitter and the Tele, I have seemed to accidentally start a revolutionary movement known as “The Rally Phone”.

I write to you all today in attempts to clear up some of the rumors regarding the incident. No, the phone was not brought with the team and is the rightful property of the Alabama Crimson Tide. No, divine intervention was not on the other line. Yes, I did remember the game was being televised. It wasn’t until the swarm of text messages I received after the game on the bus was I aware of what I had done.

In terms of the truth, there isn’t much to be said. My fellow teammates began to grab for their helmets and pin up their rally bows all around me. Turning back to the dugout I searched high and low of an item worthy of dawning on my dome, but came up short. All that remained in the cubbies were a bag of sunflower seeds, a chewed on paper cup and the phone.

It glowed in the back of the very top cubby as it whispered my name in an eerie tone that would lure the most resistant of souls. I grabbed it, and it almost placed itself on my head. Returning to my spot on the dugout rail, I showed the world the innovation and sleek style of not only the LSU Tigers, but also the t-model rotary phones. I guess you could say that desperate times call for desperate measures, at I desperately wanted to win.

From Alex Boulet
Q: Did the rally phone give you any wisdom at the SEC Tournament?
A: No, just some extra face time on ESPN.

From Allison Falcon
Q: A national audience saw the inaugural ‘Rally Item’ on ESPNU last week, any chance we can get a preview on the item for this weekend?
A: The item of the week cannot be determined until I am in the moment. I don’t find the item, the item finds me.

From Ashley Applegate
Q: Approximately how many follower requests do you receive after television games?
A: Before I got my hair done, maybe two. After highlights, 10-15. Who knew people would start caring what I had to say once I became more blonde?

From Juliana Santos
Q: Is it true, are you really a flower child?
A: Coming from the thick green forests of Oregon, you could say I bleed an eco-friendly purple and gold tie-dye.

From Tammy Vermeulen
Q: How bad do you want to lead this team to the Women’s College World Series this year?
A: After seeing everyone put in so much effort, heart, and work towards the WCWS, there is no doubt in my mind that we are capable and well on our way.

From Jacee Blades
Q: As a soon to be graduate and future teacher, what was your favorite class you took at LSU?
A: Children’s literature, EDCI 3000. I had an official excuse to read Judy Blume again and not be judged.

From Ashleigh Kuhn
Q: How does it feel to be a deer?
A: I am a proud member of the Deer Family. Along with Dylan Supak, yourself and I, the Deer Family is composed of grace, stealth and limbs. Most importantly limbs. It is these limbs that hold us together so close as a family, a family that I am so grateful to be a part of.

From Dylan Supak
Q: On a scale of 1 to 10, how well do you think you raised me?
A: I am proud to call you my daughter and even more proud to call you our starting first basemen. However, your love for scientific facts and chocolate pudding has spun wildly out of control. I am afraid I have failed you, I give myself a three.

From Brittany Mack
Q: How do you sleep at night knowing that one of the members of your “Deer Family” hunts and kills deer?
A: I don’t. I have adapted and am now primarily nocturnal, which is why I prefer the night games.

From Morgan Russell
Q: Do you think you have an advantage over normal sized first baseman because of your ginormous lanky limbs?
A: Yes, I specialize in being in the way and stretching ridiculous distances. It’s actually on my resume.

From Rikki Alcaraz and Tammy Wray
Q: How do you control all of your limbs?
A: It is something that comes with years of training and lots of discipline. Unfortunately, I’m still not in full control. Here’s to hoping Zumba this summer will help.

From Simone Heyward
Q: How do you stay in such great shape?
A: Eat only lettuce and desserts. My abs came from the laughing at my teammates, and I get my cardio from running laps around the bus after dinner.

That’s all for today Tiger fans. I might have been able to convince the powers to be to let me write again later this week.